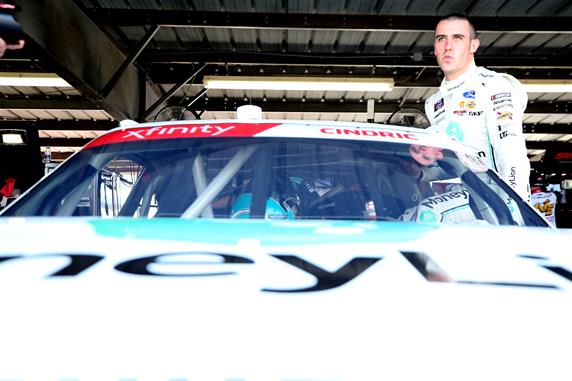 The Xfinity Series continues their playoffs at the Monster Mile. This race will be an elimination race so expect the racing to be intense as the 12 drivers’ battle for the 8 spots in the next round. The Xfinity Series last competed at Dover in May. The “Big Four” (Christopher Bell, Cole Custer, Tyler Reddick and Justin Allgaier) took the top 4 positions in the race. Will they dominate again at the Monster Mile today? The Drive Sober 200 can be seen Saturday at 2 p.m. ET on NBC Sports Network.

The race Saturday is scheduled for 200 laps (200 miles). That means there are 50 points available for leading laps and 100 points available for fastest laps. The trend at Dover is for one driver to lead over 120 laps and another driver to lead 40 laps. The last two races have seen the same two drivers dominate the race. Cole Custer led 155 laps and Christopher Bell led 44 laps in May. Last fall Christopher Bell led 110 laps and Cole Custer led 38 laps. These two drivers will likely dominate the race today.

I will be building some lineups for Tournament Contests with both Christopher Bell and Cole Custer because they could score 100+ DK points each. With that much production at the top of the lineup, you do not need much from the other 4 drivers.

Pairing Christopher Bell or Cole Custer with Justin Allgaier is a good play in Cash Contests. Allgaier led over 100 laps at Dover last year and the Monster Mile ranks as one of his best tracks. Pairing Custer with Allgaier saves $1,400 in salary and allows you to build a more Balanced Lineup.

Justin Allgaier is my top Cash Contest driver this week. He has improved over the last month and Dover is his best track. His average finishing position in the last 3 races is 2nd. That is a high floor so he is a lock for Cash Contest and a good pivot from Bell and Custer in Tournament Contests.

Tyler Reddick is a good Tournament pivot from Bell, Custer and Allgaier. Reddick has a great chance to finish in the top 3 but the problem is that he needs to lead more laps. He only led 23 laps in his last 3 races at Dover, but his 5th best average speed in final practice could lead to some more laps led Saturday.

Chase Briscoe is a good sleeper pick for Tournament Contests. He had the 3rd fastest car on the long runs and the No. 98 team said they used the same setup as Cole Custer. * Briscoe won the pole and then his car had an electrical issue. They are going to try and fix it on pit road but if they have to take the car to the garage to work on it, Briscoe will start last and be scored from the No. 1 spot. That would be too much risk to take on in DFS contests.

Zane Smith is a good choice for both Cash and Tournament lineups at $8,900. He finished 9th at Dover in May and he has a 10th place average finishing position in his 8 Xfinity Series races this season. He also had the 4th-fastest car on the long runs in practice.

Brandon Jones is a driver I will use in both Cash and Tournament Contests. Joe Gibbs Racing is always good at this track so I expect the No. 19 car to be fast. He has never finished outside the top 10 while driving a JGR car at Dover and he led laps in 2 of his 3 races.

John H. Nemechek is better on the short tracks than he is on the larger ones. He finished 8th and 9th in his last two races at Dover. I will take a chance with him in both Cash and Tournament Contests today.

Best Mid-Priced Drivers: Ross Chastain, Gray Gaulding and Jeremy Clements are the best choices from the low $8K to low $7K range. These drivers should be used for both Cash and Tournament Contests Saturday.

Best Cheap Drivers: J.J. Yeley, Dillon Bassett, Timmy Hill, Chad Finchum and Mike Harmon (In that order). Yeley is driving the No. 93 car for R.S.S. Means Racing. He finished 16th in this car at Bristol and Ryan Sieg finished 8th in this car at New Hampshire. Harmon is good at staying out of the way and moving up 4-5 spots in the race.

* Michael Annett will start from the back and be scored from the 16th position since the team changed and engine after final practice.

** Landon Cassill qualified the car for Morgan Shepard. This team usually likes to start and park. 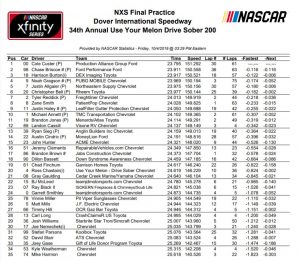 Driver Rankings (According to the stats) 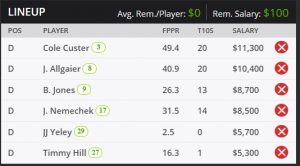 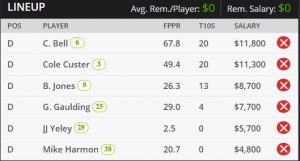