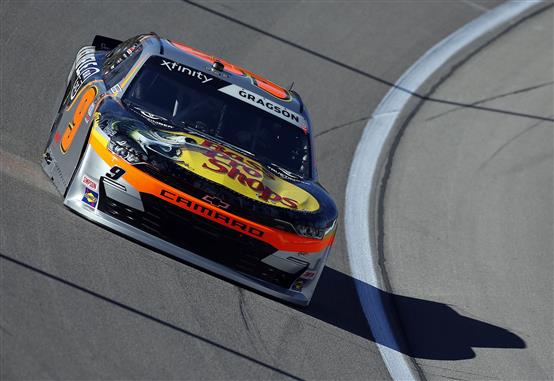 The 2020 Xfinity Series will join the Trucks and Cup Series at Las Vegas Speedway this week. It is surprising that the Cup Series regulars are not entered in the race Saturday. I thought for sure some of the drivers would want the extra seat time to see how the tires wears out over a long run. The lack of Cup Series stars should make the racing more competitive but also harder to predict the dominators.   The Boyd Gaming 300 can be seen Saturday at 4 p.m. ET on Fox Sports 1.

The race today is scheduled for 200 laps (300 miles). That means there will be 50 points available for leading laps and 100 points available for fastest laps. We need to look at the races at Las Vegas where the Cup Series drivers were not entered to see what to expect from our dominators today. The trend is for one driver to lead 140 laps, another to lead 30 and a third to lead 20. That was with the “Big Three” in the race last year. The dominator points should be spread more evenly through the field Saturday because the talent is more even this season. 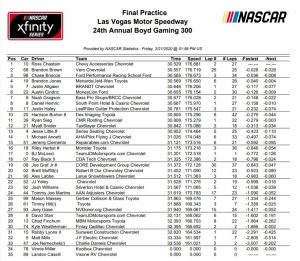 * My picks tend to be very popular in DraftKings contests so the best way to win money is to use different combinations of the drivers listed above and not simply copying the lineups posted below.

* Since this is the first intermediate track of the season and we do not know which teams will dominate in 2020… I suggest using a lot of different combinations of dominators Saturday. I will be playing a lot more of the lower-priced Multi-Entry Contests this week with a lot of different lineups. I am sure this will allow me to have a few lineups that return a nice profit.

Justin Allgaier $12,200 should be the top driver with the “Big Three” now racing on Sundays. Allgaier scored the most DK Points on the 1.5-mile tracks last year when you eliminate Christopher Bell, Cole Custer and Tyler Reddick from the equation. The No. 7 car finished fifth in his last race in Sin City. He should be up front again Saturday.

Chase Briscoe $11,000 is now the top driver for Stewart-Haas Racing. He will have all the resources that Cole Custer had last year. Briscoe really ran well on the 1.5-mile tracks in the playoffs last year. He finished 3rd at Kansas and 3rd at Homestead. He should be one of the drivers who dominate the race Sunday.

Austin Cindric $11,300 did not have a great season on the 1.5-mile tracks in 2019. That is unusual for Team Penske to struggle and I do not expect it to happen again in 2020. Cendric finished 3rd at Texas and 7th at Homestead so the team must have found some speed. Las Vegas is historically a Team Penske track so Cindric is a driver we can take a chance on in this race.

Daniel Hemric $10,200 will be one of my top plays in the Boyd Gaming 300. He did not win many raced when he was in the Xfinity Series but he did dominate a lot of them. I think he could be a dominator again at Las Vegas. His Junior Motorsports No. 8 Chevy should have a lot of speed and Hemric has the talent to keep it up front.

Noah Gragson $9,900 will have a lot of momentum following his win at Daytona. The Las Vegas native will also have a lot of friends and family in the seats so I expect him to be highly motivated to put on a show. A lot of people are talking about Justin Allgaier, Austin Cindric and Chase Briscoe as the “Big Three” this season. You better not leave Gragson out of this conversation. He could be the best of the group.

Brandon Jones $9,300 is a great pivot from the more popular drivers listed above. We know a Joe Gibbs Racing car is going to have speed and run up front Saturday. My money is on Jones being that driver. He ended the season with a lot of momentum. Jones finished 3rd at Las Vegas, won at Kansas, finished 4th at Texas and 8th at Homestead. That is pretty liable.

Michael Annett $9,600 had a series-best 7.5 average finishing position on the 1.5-mile tracks last year. The problem with Annett is that he does not lead many laps. Annett only led 28 laps in his 10 intermediate track races in 2019. He did lead the series in place differential points so that gives him some value today.

Harrison Burton $8,900 is a high-risk, high-reward driver this week. He finished 2nd in the race at Daytona so he will have some momentum going into the race Saturday. Burton competed in three Xfinity Series races on the 1.5-mile tracks last season. He finished 34th at Kansas (Crashed), 7th at Texas and 10th at Homestead. He will be driving the No. 20 car and have most of the resources that Christopher Bell had with this team last year (Including Kyle Busch’s Cup Series Pit Crew).

Ryan Sieg $8,700 is a must play from the 32nd starting spot. He should easily score 20 place differential points whenever they race. Sieg competed in all 10 races on 1.5-mile tracks in the Xfinity Series last year and his average finishing position was 12.5. If he finishes 12th in this race he will be one of the highest scoring drivers in the contest.

Riley Herbst $7,800 will be driving the No. 18 car for Joe Gibbs Racing this week. Whenever we can get a JGR car for under $8K we need to take it. We know the car will have speed. It all comes down to Herbst talent. He qualified 15th and finished 9th in the Xfinity Series race at Las Vegas last year. He will have a lot of value if Herbst can have a repeat performance Saturday.

Brandon Brown $7,600 is always one of my favorite picks when he qualifies outside the top 10. He was very good at scoring place differential points last year and his ownership was usually low. Brown starts 19th  so he should be a great value pick today.

Myatt Snider $6,600 will be driving the No. 21 car for Richard Childress Racing. This is the same car that Tyler Reddick had last year. I planned on using Snider in almost every lineup and then he went out and crashed his car in practice. Snider will start last and be scored from the No. 1 starting position. That makes him an all risk, no reward driver so you need to fade him when they race.

My top cheap drivers to allow you to spend up for the more expensive drivers include: Jesse Little, B.J. McLeod, Joey Gase.

Here are my picks for the Boyd Gaming 300… 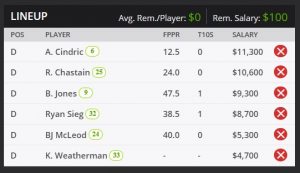 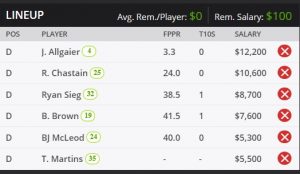