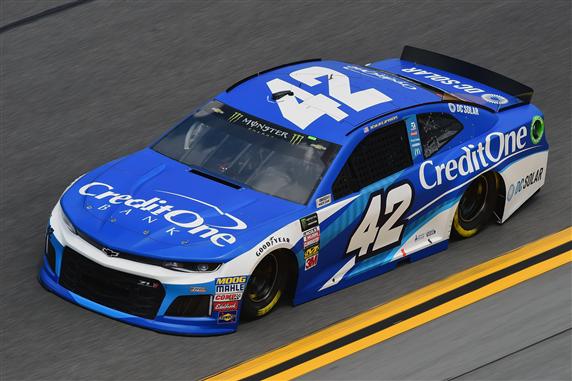 The Cup Series will get back to racing on an intermediate track this week after a trip to Bristol. There have been five races on the intermediate tracks this season so this race should be one of the easier races to predict. The Folds of Honor Quick Trip 500 can be Sunday at 3 p.m. ET on Fox.

If you know any way to remove a jinx, please let me know. My Driver Group Game picks have sucked. It is not that the drivers do not have fast cars. They just keep crashing with one or two laps left in the race. My luck has never been this bad in the Driver Group Game and sooner or later my luck will turn around; but damn this is frustrating. I will continue to use every resource possible to ensure the picks get better.

Tires! Tires! Tires! Atlanta Motor Speedway eats tires as fast as Darlington or Auto Club. Teams will be taking four fresh tires at every pit stop and there are a lot of stops in this race since it is 500 miles in length. The drivers who ran well at Darlington should be up front Sunday.

(Start) Chase Elliott: How can you not consider Chase Elliott for your Fantasy NASCAR team this week? The No. 9 car could easily have four to five trips to Victory Lane this season. Elliott consistently has the fastest car in the field and I doubt it will change at his home track. Elliott has finished three of his four races at Atlanta in the top 10. Now he starts from the pole Sunday. I would not be surprised if they were ringing the Siren in Dawsonville after the race.

(Bench) Kevin Harvick: When drivers talk about running fast laps at Atlanta, they often refer to the “Kevin Harvick Line.” He can hook his left-side tires on the apron to help turn the car and make really fast laps. Harvick just won on a track that eats tires (The Real Heroes 500 at Darlington). The No. 4 car will have a good chance to win again Sunday. Harvick has led a series-high 324 laps on the intermediate tracks this season and he has a 5.4 average finishing position. Harvick should be a lock for a top-five finish Sunday.

(Start) Kurt Busch: How did Kurt Busch finish seventh last week? He stunk up the joint the entire race but was able to finish in the top seven for the sixth time in his last seven races. Busch has been one of the most consistent drivers this season and his consistency at Atlanta is outstanding. Busch has a sixth-place average finishing position at Atlanta in the LAST DECADE! That is awesome. This is by far his best track so we need to get the No. 1 car into our lineups Sunday.

(Start) Alex Bowman: The No. 88 car has been blazing fast on the intermediate tracks this season. Alex Bowman has also been one of the best drivers at tracks that wear out tires quickly. He won the race at Chicagoland Speedway last year and Auto Club in March. Bowman also finished second at Darlington. I expect the No. 88 car to lead some laps and finish in the top 10 again Sunday.

(Bench) Jimmie Johnson: Jimmie Johnson has a series-high five trips to Victory Lane at Atlanta. He has not been very good at the track the last two seasons, but Johnson was in a serious slump. The No. 48 team is getting back to where they used to be. Johnson finished 2nd and 8th at Darlington but his runner-up finish was disqualified because the car was too low at the end of the race. The car was still fast. I expect Johnson to compete for another top-five finish Sunday.

(Bench) Clint Bowyer: Clint Bowyer will have some momentum after he sneaked away with a second-place finish at Bristol. Now he gets to compete at his best track. Bowyer has finished every race in a Stewart-Haas Racing Ford in the top 11 at Atlanta. He said that Kevin Harvick taught him the “Harvick Line” but he has not perfected as well as his teammate. Bowyer has been close though. He finished 3rd and 5th in his last two races at Atlanta. I expect this to be one of Bowyer’s best races in 2020.

(Start) Tyler Reddick: Tyler Reddick had some success at Atlanta in the Xfinity Series and I expect the No. 8 car to run well Sunday. Reddick has been at his best at tracks where he had to manage his tires over a long run. Reddick finished 11th at Auto Club and 7th and 13th at Darlington. I expect Reddick to finish in the top-15 at Atlanta.

(Bench) Christopher Bell: Christopher Bell got off to a horrible start in 2020 but he is running pretty well right now. Bell has a 14th-place average finishing position since the Cup Series returned from the Covid-19 stoppage. Bell absolutely smoked the field in the Xfinity Series race at Atlanta last year. He led 142 of the 163 laps and went to Victory Lane. This is a good track to use Bell in your lineup.