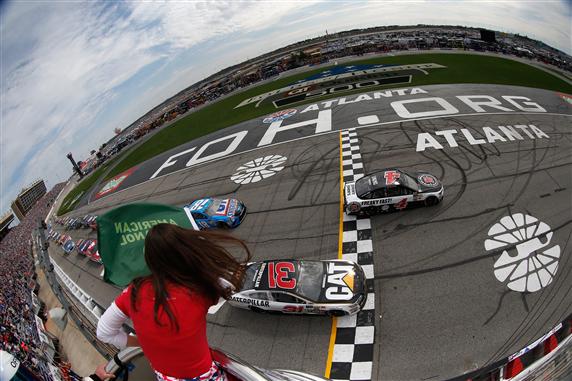 The Monster Energy NASCAR Cup Series competes at Atlanta Motor Speedway this week for the Folds of Honor QuikTrip 500. After a crazy race at Daytona, we will now get to see what the teams have for the 2018 season on the intermediate tracks. The race can be seen Sunday at 2 pm ET on Fox.

My Driver Group Game picks got off to a good start.  Joey Logano finished 4th, Paul Menard finished 6th, Ryan Blaney was 7th and Michael McDowell was 9th. Our teams scored 344 points. Whenever you can come out of Daytona with 300+ points you should consider yourself lucky. Now it is on to a more predictable race at Atlanta and time to put our competition a lap down.

The word for the week will be “tires”. No track on the schedule eats up the tires as fast at Atlanta. The track was scheduled to be repaved following the race last year but the drivers begged Ed Clark (Atlanta Motor Speedway President) to leave the track as it is because it creates some of the best racing of the year. The drivers who manage their tires the best will be up front Sunday.

* Remember, this week there is qualifying on Friday so qualifying points will be awarded to the top 5 qualifiers. Our lineups must be in by Friday morning.

Martin Truex Jr. (9) is my insurance policy for Kevin Harvick. The 2nd-best driver at Atlanta and the defending race winner is Brad Keselowski. I am worried about having two Fords on my team because the Toyotas had an advantage over them on the 1.5-mile tracks last year and we do not know how the Camaro ZL1 car will perform this year. We know the Toyotas have speed at these tracks so pairing a Toyota (Kyle Busch or Martin Truex Jr.) with Harvick is the best strategy.

Atlanta is the 9th-best track for Truex so I hope I do not need to use him. Truex has finished the last three races at Atlanta in the top 8, so he will be a safe pick. Truex won the pole for 3 of the last four races on the 1.5-mile tracks (Homestead, Kansas and Charlotte) so he is a great pick for qualifying points Friday.

Chase Elliott (9) has not won a race in the MENCS yet, but that could change Sunday. The Georgia native is at his best at his home track. Elliott has never finished outside the top 8 at Atlanta. Last year he had the 3rd-best driver ranking in the race (Behind Kevin Harvick and Brad Keselowski). He also scored the 3rd-most fantasy points in the last 10 races on the 1.5-mile tracks (Behind Martin Truex Jr. and Kevin Harvick). We only get 9 allocations with Elliott and this is one of the best tracks to use him on.

Kurt Busch (9) must be on all teams this week. This is by far the best track for Busch. He has an average finishing position of 8th at Atlanta since joining Stewart-Haas Racing. Busch has led the 2nd-most laps in the last 3 races at the track. The only driver to lead more laps is his teammate, Kevin Harvick. Busch has scored the 3rd-most fantasy points in the last 3 races at Atlanta. You only get 9 allocations with each driver so you need to use one with Busch this week.

Erik Jones (9) will be my insurance policy in Group B. Since it is unknown how well each manufacturer will run on the 1.5-mile tracks this season, I want to be diverse in my picks and get as many makes as possible in my picks. Jones ran well in his first race at Atlanta. He struggled in qualifying so he started 23rd. He quickly drove through the field and finished 14th. Jones had the 9th-best average running position, but remember… this was his first race at this track in the MENCS. I expect him to be much better this week.

Jamie McMurray (9) will be on my team for qualifying points. I would be surprised if Chase Elliott and Kurt Busch did not make my starting lineup Sunday, so I need a driver who can qualify in the top 5. There are few drivers in the field better at qualifying at Atlanta then McMurray. He started 3rd in 2015, 2nd in 2016 and 7th last year. McMurray is also a safe pick for a top 12 finish. He finished 10th last year and had the 10th-best driver rating in the race.

Darrell Wallace Jr. (9) will most likely be my starting driver in Group C Sunday. I really like what I saw from him at Daytona. Wallace competed in one race last year in the No. 43 car on a 1.5-mile track. Wallace qualified 17th and finished 11th at Kentucky. Last year he competed in the Xfinity Series at Atlanta and finished 6th.  He will have some momentum and confidence after finishing 2nd in the Daytona 500. Wallace is the best choice in Group C this week.

Alex Bowman (9) will be the driver I pair with Darrell Wallace Jr. Sunday. I thought about selecting William Byron but I want him to get more experience and use Byron in the 2nd-half of the season. Bowman should be a good pick. He ran really well on the 1.5-mile tracks in the No. 88 car in 2016. Bowman finished 10th at Chicago, 39th at Charlotte (flat tire caused him to crash), 7th at Kansas, 13th at Texas and 16th at Homestead. I expect Bowman to finish in the top 15 at Atlanta.