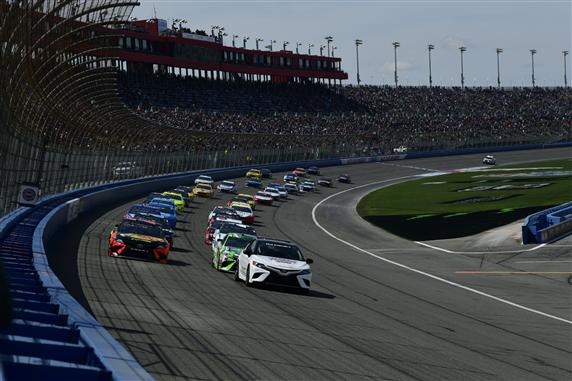 The Monster Energy NASCAR Cup Series will complete the west coast swing this week when they waive the green flag at Auto Club Speedway. The same aero package used at Las Vegas will be used in the race this week. I expect the race to have similar results. Qualifying will be crazy so don’t miss it Friday. The Auto Club 400 is scheduled for 3:30 p.m. ET on Fox.

The rough surface at Auto Club is similar to Atlanta and the aero package used this week is the same as the race at Las Vegas. For that reason I am concentrating on the results from those two races more than the past races at Auto Club Speedway. Team Penske clearly has an advantage with the aero package and this is their best track. Heck, Roger Penske designed and financed the building of the track. I expect Kyle Busch, Martin Truex Jr., Kevin Harvick and Kyle Larson to run well but I am picking Joey Logano as my race winner at Auto Club.

Here are my picks for Auto Club…

Kyle Busch (8): I thought about going with both Team Penske drivers but Busch is on fire. He won the last race at Phoenix and he has not finished outside the top 6 all season. Busch has competed in 6 races between the MENCS and the Xfinity Series in 2019 and his average finishing position is 2.3. That is awesome! Busch has also finished in the top 3 in 6 of his last 8 races at Auto Club. He is the safest pick in the field this week. I will use my first allocation with the No. 18 car this week if I need to.

Joey Logano (7): Logano won the Pennzoil 400 at Las Vegas in the Pennzoil paint scheme. Can he win the Auto Club 400 in the Auto Club paint scheme? I think so. The draft is going to come into play more at this track than it did at Las Vegas because of the size of Auto Club Speedway (2-mile oval). Logano is the best driver in the garage at side-drafting and using the draft to his advantage. Logano has the best average finishing position since the MENCS playoffs began last year. I will play the driver on a hot streak this week.

Denny Hamlin (7): Hamlin has run well using the aero package that will be used Sunday. Hamlin finished 10th at Las Vegas and 11th at Atlanta. His average running position was 6th at Las Vegas and 8th at Atlanta so his car was actually better then the results. Since the draft will be more of a factor this week, Hamlin should have a great chance to finish in the top 5. He is one of the best drivers in the garage on the plate tracks. I have no problem burning an allocation with Hamlin while he is running well.

Aric Almirola (6): Almirola has been one of the most consistent drivers in the MENCS since the playoffs began last year. Almirola has finished every race since last August on 1.5-mile or 2-mile ovals in the top 10. His average finishing position in these races is 8th. Almirola finished 7th at Las Vegas and 8th at Atlanta. I expect the No. 10 car to finish in the top 10 again in California.

Kurt Busch (8): Busch has been one of the surprises of the 2019 season. Most people thought he would struggle with his new team but that has not been the case. Busch finished 3rd at Atlanta and 5th at Las Vegas. It is obvious that this aero package fits his driving style. Having Kyle Larson as a teammate has to help with his setup at Auto Club. I have not used any allocations with Busch this season but I may use one Sunday.

Ryan Blaney (7): Blaney will have some momentum after his best race of the season at Phoenix. This is a completely different track but Team Penske seems to have the handling figured out to turn fast laps using this aero package. Blaney did not perform as well as his teammates at Atlanta and Las Vegas but it had a lot to do with penalties and the lack of cautions to get his lap back. I expect a much better race from Blaney Sunday.

Daniel Hemric (6): I really like what I saw from Richard Childress Racing while using this aero package. Their cars have qualified really well but they have had a problem putting a complete race together. Hemric was running 4th at Atlanta when he had a tire go down. He ran well in the Xfinity Series at Auto Club and I expect him to be one of the best drivers in Group C this week.

Chris Buescher (7): Buescher has been the best driver in Group C this season and I expect him to add another top 20 finish to his 2019 resume. Buescher ran well while using this aero package. He finished 9th at Atlanta and 18th at Las Vegas. JTG Daugherty has found a lot of speed since they switched to the Hedrick Motorsports engines. This is a good race to use an allocation with Buescher.