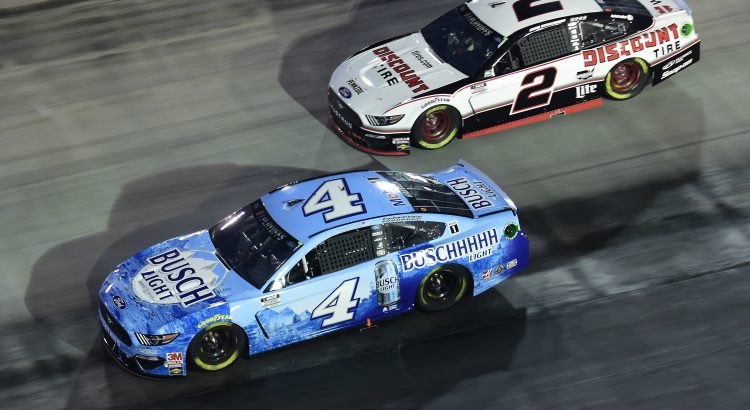 The Cup Series will travel back to Bristol Motor Speedway this week. The last race at Bristol was a dirt track race. The mud has been removed and we will be back to a traditional race, using the 750 HP aero package at one of the best short tracks on the schedule. The Bass Pro Shop Night Race can be seen Saturday evening at 7:30 p.m. ET on NBCSN.

Here is my starting lineup for Bristol…

Joey Logano (7): I will take my chances with Joey Logano Saturday night. He shocked everyone when Logano won the Bristol Dirt Track Race. He has two wins on Bristol’s concrete track too. I am focusing my picks on how the drivers have performed this year in the 750 HP aero package races. Logano ranks second to Denny Hamlin, so he should be good again Saturday night.

Allocation Saver is Kevin Harvick (7): My choice for Group A this week came down to Joey Logano or Kevin Harvick. The No. 4 car won this race last year but Harvick is not the same driver he was in 2020. Harvick has finished his last four races on oval tracks using the 750 HP aero package in the top-eight. He should finish in the top-10 and score some Stage points Saturday night. He will be a good pick if Denny Hamlin and Chase Elliott are not available for your team and you do not trust Joey Logano.

Kyle Larson is my pick to win Saturday night but I only have one allocation left with the No. 5 car. Larson is already locked into the Round of 12 and he said, “I plan to just go out there and race as hard as I can at Bristol and if I win that is great. If I crash, well, at least I know I gave it all I had.” I will save my last allocation with Larson for a race where he has more to race for. If you have two or more allocations left with Larson, I would use it Saturday night.

Kyle Busch (2): Kyle Busch is in 10th place in the Playoff Standings. He is only eight points above the cut line. He needs a great race Saturday night and he should get it at his best track. Busch has 22 trips to Victory Lane at Bristol in the three top series. Rowdy is by far the best driver at this track. He simply needs a car that he can wheel around the track. I want to use my allocations with Busch before he is eliminated from the playoffs and his “I don’t give a shit” attitude kicks in.

Kurt Busch (2): Kurt Busch is in almost the same situation as his brother. Busch sits at the cut line for the playoffs and he needs a good race in order to advance. Both Busch brothers are great at this track. The older Busch Brother has won six times at Bristol and his 9.3 average finishing position in the last six races at Bristol is third-best in the series (behind Kyle Busch 5.3 and Kyle Larson 7.2). I will pair the Busch Brothers in my lineup Saturday night.

Other Choices: Christopher Bell (2): The Joe Gibbs Racing cars have been running well in the playoffs so Christopher Bell should be a good pick Saturday night. He has two races at Bristol (concrete races) on his resume and he finished 9th and 28th. Erik Jones finished 3rd and 5th in his last two races in the No. 20 car at Bristol. Bell should run just as well as Jones did. If you are out of allocations with the Busch Brothers; take a chance with Jones.

Allocation Saver: Tyler Reddick (4): Tyler Reddick is 14th in the Playoff Standings and he almost needs a win to advance. You know he is going to have the best car that Richard Childress Racing has left in their garage and he will be extra aggressive to get to the front. Reddick finished 4th in the Bristol Night Race last year. He is a risky pick, but he could pay off Saturday night.

I would love to keep playing the hot hand and use Ross Chastain again Saturday night but I am down to one allocation with the No. 42 car. Bristol also ranks as the worst track for Chastain (His average finishing position is 30th). I still think Chastain finishes in the top-15, but I will save him for tracks where he has a history of running well at.

Daniel Suarez (6): Daniel Suarez has been decent lately. He finished 17th, 13th and 19th in his last three races and he has a 15.5 average finishing position on the oval tracks where the 750 HP aero package has been used this year. Suarez has eight races at Bristol on his resume. His average finishing position is 14th. Some of those races were in some crappy cars too (Gaunt Brothers Racing). He should be able to finish in the top-15 Saturday night.

Other Good Option: Bubba Wallace (6): Do you trust Bubba Wallace behind the wheel of your Fantasy NASCAR team? I don’t, but the stats suggest he should be a decent pick Saturday night. Wallace has a 16th-place average finishing position in his last four races at Bristol. His Joe Gibbs Racing supported Toyota should have enough speed to finish in the top-15 Saturday. Wallace will be a decent pick if you trust him.