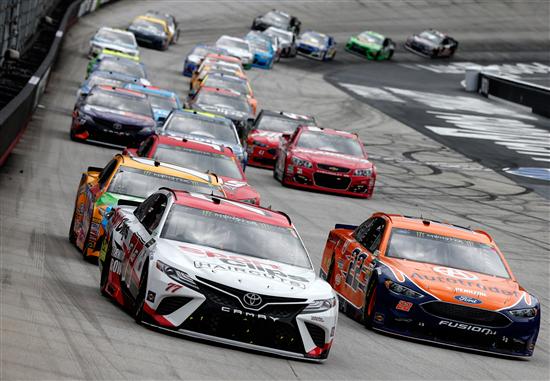 The Monster Energy NASCAR Cup Series will compete at Bristol Motor Speedway this week in the Food City 500. This is one of my favorite tracks and the first track I even seen a race at. Bristol should be on every race fan’s bucket list. The race can be seen Sunday at 2pm ET on Fox.

NASCAR will have its traditional schedule for the Food City 500. There will be one practice Friday, followed by qualifying Friday evening and two practices Saturday morning. Our lineups will be due by 3am ET Friday morning so remember to set your lineups before you go to bed Thursday night.

The 2017 Food City 500 was run on a Monday last year because of rain on the weekend. Hope that doesn’t happen this week!! The race was dominated by Kyle Larson. He won the pole and led 202 laps before his old tires made him fall to 6th at the end of the race. Martin Truex Jr. also had a good race. He led 116 laps and finished 8th. The No. 48 team slowly worked their way to the front and Jimmie Johnson was able to win for the second time at Bristol and his 84th win of his career. This race could have been much different if Kyle Busch was not involved in an early race accident.

I see a lot of my fellow fantasy racing experts breaking down Bristol by saying it is short track racing. No it is not short track racing… it is Bristol racing. This track is so unique with its high banking and concrete surface that it cannot be compare to any other track. There are a lot of drivers who are good at Bristol and a lot who cannot wait until the 500 laps are over. This is a great week to take a gamble on the drivers who have had success at Bristol and you do not plan to use many allocations with this week.

Group A is tough this week. Kevin Harvick is the best pick but it is tough to use him at this track because he has been so dominant on the larger tracks. Jimmie Johnson has great stats at Bristol but can anyone really trust the No. 48 team right now. Joey Logano is the most consistent driver at Bristol. If you only want a top-five finish from your Group A driver, the No. 22 car is for you.

Kyle Busch (8) is ultimate Boom or Bust driver this week. He is either going to win or finish last Sunday. In his last four races at Bristol, Busch has finished 1st, 35th, 38th and 39th. He has also led the most laps in the last two years at the track. Busch should not be on your team if you want to play it safe this week. I am swinging for the fences so Busch will be my top Group A driver. I just hope this is the weekend when the “Good” Busch shows up at the track.

Kyle Larson (9) was the best driver at Bristol last year. He led 202 laps in the spring race and 70 laps in the fall race. He has yet to win at this track but that could change Sunday. No driver in the field was helped more from the VHT compound being added to the track to create more grooves to race on. Larson used the high line to pass a lot of cars last year. The track will once again be adding the “Track Bite” to the surface. I expect Larson to run well this week.

Ryan Blaney and Kurt Busch will be good picks for Group B but I am down to 6 allocations with both drivers. If I had 8 or more allocations with them I would use them over Ricky Stenhouse Jr. and Jamie McMurray. A great sleeper pick this week is Trevor Bayne. The Tennessee native has been very good at his home track. He has finished his last four races at Bristol in the top 12 and ranks 2nd in the series in average finishing position.

Erik Jones (8) is the best choice in Group B this week. He said after the race Sunday that he cannot wait to get to Bristol because it is his favorite track. Jones almost won the Bristol Night Race last year. He won the pole, led a series-high 260 laps and finished 2nd. Jones must be on all teams this week. There is not better track to use an allocation with him at.

Clint Bowyer (8) has been running as well now as he has ever run in his career. That should make him a threat to win his second race of the season Sunday. Bowyer qualified 9th and finished 2nd in this race last year. The No. 14 team was really struggling at this time last year, yet Bowyer was still able to finish runner up. I expect the Stewart-Haas Racing cars to continue to run well this week.

Ricky Stenhouse Jr. (9) is another driver who should be on every team this week. Most people consider Stenhouse a Superspeedway Ace, but Bristol is actually his best track. The secret to selecting good drivers for Bristol is to pick drivers who can stay out of trouble. Stenhouse may hit the wall at every other track but he is one of the best at avoiding wrecks at Bristol. Stenhouse has competed in 10 MENCS races at Bristol. His worst finish is 21st and he has a top-10 average finishing position. Stenhouse finished 9th in this race last year and I expect another top-10 finish from him Sunday.

Jamie McMurray (7) will be my last driver for Group B. I really wanted to go with Trevor Bayne because his stats at Bristol are very good, but I just cannot pull the trigger. McMurray has had a bad season and he would not be on my team if he did not run so well last week at Texas. The No. 1 team has had fast cars and bad luck. Maybe after last week McMurray’s luck is turning around. Bristol ranks as McMurray’s 5th best track.

There really is no great choice in Group C this week. When Matt Dibendetto has the best stats at the track you know we are in trouble. Since Alex Bowman, William Byron and Darrell Wallace Jr. have not run well in Thunder Valley, I will save their allocations for another track and hope my sleeper picks pay off this week.

Matt Dibendetto (9) loves this track. He plans for this race all year, mostly because he loves dressing up for his intro song, but he has been pretty good on the track as well. The strategy for Dibenedetto is easy. He runs the bottom of the track, does not move and tries to move to the front as drivers fall out of the race. His average finishing position in his six races at the track is 20th. I will take that from him this week.

Chris Buescher (8) will be my second pick. I thought about selecting Michael McDowell but he has not been as good in the No. 34 car as he was in the No. 95. Buescher has been running well this season. He finished 5th at Bristol in 2016. If Buescher finishes 5th this week and he is in your starting lineup, you should feel like you just won the lottery.