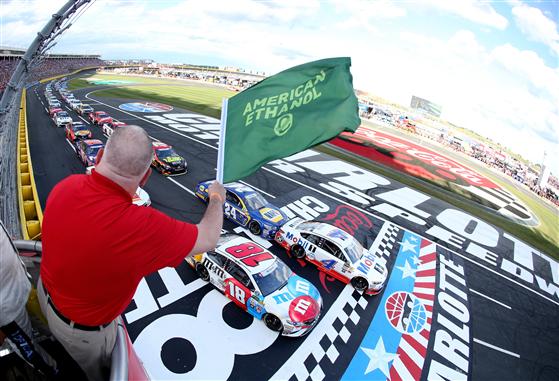 The Monster Energy NASCAR Cup Series will compete at Charlotte Motor Speedway this week in the Coca-Cola 600. This is the longest race of the season so find a nice comfy place on the couch because you will be there a while if you plan to watch the entire race.  The race can be seen Sunday night at 6 p.m. ET on Fox.

The MENCS will have a unique schedule this week. There will be one practice session Thursday afternoon followed by qualifying Thursday evening. The MENCS will not have any track activity on Friday, but they will have two 50-minute practices Saturday morning to dial in their cars. Our Driver Group Game picks need to be selected by 8 a.m. Thursday morning.

The MENCS last competed at Charlotte in October of 2017. The race was dominated by Kevin Harvick (sound familiar?). The No. 4 car qualified 3rd, led a race-high 149 laps and won both Stages. Martin Truex Jr. fought a tight racecar during the race. He qualified 17th and the team continued to work on their car. Truex was able to take the lead from Harvick, led 91 laps and found his way to Victory Lane.

Usually we can use the results from the All-Star Race to predict who will be fast in the Coca-Cola 600. That is not the case this week. NASCAR used a new package with a restrictor-plate on the engines, a huge spoiler in the back of the cars and ducts on the front to manipulate the air. What we saw Saturday night will not be what we will see Sunday.

The racing this week will be the same as what we have seen on the 1.5-mile tracks this season. We can use the results from the last race at Kansas since they are both 1.5-mile tracks. Charlotte Motor Speedway is flatter than Kansas but both tracks require the same aerodynamics. If you stick to the drivers who have been running well on the large ovals this season you should be in good shape for the Coca-Cola 600.

Kevin Harvick is a lock for the top spot in Group A. He dominated the last race at Charlotte and he is running too well right now to fade. The second choice for Group A comes down to Martin Truex Jr. or Kyle Larson. This is the best track for Truex and he is one of the favorites to win Sunday night. It is hard to ignore what Larson did at Kansas though. Truex will be the popular pick and the safer pick for your team. If you want to be different from the others in your league and try to make up some ground on the competition, I would recommend the No. 42 car. Larson should have a good chance to qualify up front Thursday and score some bonus points for your team.

Kevin Harvick (4): I am down to 4 allocations with Harvick but I do not care. I would have him in my lineup this week if I only had one allocation left. He has dominated the 1.5-mile tracks like we have not seen before. Harvick has finished 1st, 1st, 2nd and 1st, while leading 561 laps this year at these tracks. Harvick also won the All-Star Race at Charlotte last Saturday night. His average starting position is 2nd so he is a great pick for bonus points for qualifying as well. I would be shocked if he did not qualify up front, lead the most laps and finish in the top 3 Sunday night.

Martin Truex Jr. (9): I am surprised I still have all 9 allocations left with Truex. I am sure I will use a lot of them later in the season when the No. 78 team finds the speed they had in 2017. I decided to go with Truex as my 2nd Group A driver based on track history. Truex has won two of the last four races at Charlotte and led 716 laps in the last four races. If anything happens to Kevin Harvick over the weekend, Truex should be the next best option.

My strategy in Group B this week is simple… select as many Fords as I can and make sure most of them are from Stewart-Haas Racing. It is clear that SHR has an aerodynamics advantage over the field and it is also clear from the trends in NASCAR that they will likely not have this advantage all season. So you need to use them while they are hot. I am sure Chase Elliott, Erik Jones and Daniel Suarez will find more speed over the summer months.

Ryan Blaney (5): Blaney does not have great stats at Charlotte but he was able to finish 8th in his last race at the track. Blaney is on my team because of what he has done this year on the 1.5-mile tracks. He finished 5th at Las Vegas and Texas and he had a good chance to win the race at Kansas. Blaney is also a good pick for qualifying points. He won the pole at Las Vegas and qualified 2nd at Kansas.

Kurt Busch (4): Busch has been very good at Charlotte since he joined Stewart-Haas Racing. Busch has finished 5 of his 6 races at the track in the top 10. Busch has also been very good on the 1.5-mile tracks this season. He finished 8th at Atlanta, 7th at Texas and 8th at Kansas. He should also be a threat to score qualifying points since he won the pole at Texas earlier this season.

Clint Bowyer (6): Bowyer has not finished inside the top 10 at Charlotte in a long time but he has never had cars as fast as the ones he is driving this season. Before his win at Martinsville, the last win for Bowyer came at Charlotte in 2012. Bowyer has consistently been running in the top 10 so I plan to use him until he cools off.

Aric Almirola (9): I sure wish I had Almirola on my team Kansas. He finished in the top 10 and would have been a great allocation saver for your team. I am not making the mistake of leaving the No. 10 car off my team this week. Almirola has been pretty good on the 1.5-mile tracks his season. He finished 13th at Atlanta, 10th at Las Vegas and 9th at Kansas. He scored bonus points at Kansas for qualifying and he could do it again at Charlotte.

Alex Bowman and William Byron will be the popular picks in Group C but I am saving these two drivers until Hendrick Motorsports figures out the new Camaro ZL1 car. My two picks for Group C will not be the popular picks but I they have run well on the 1.5-mile tracks this season so they should be good picks.

Chris Buescher (7): Buescher has actually run really well on the 1.5-mile tracks. He finished 15th at Las Vegas, 15th at Texas and he was running in the top 15 at Kansas when he got spun and ended up on top of Ryan Newman’s car. Buescher finished 18th and 20th in the two races at Charlotte last year. I expect him to finish in the top 20 again Sunday night.

David Ragan (8): Ragan is my 2nd driver in Group C because I want a driver with experience this week. Turning 400 laps (600 Miles) on a track is very hard on a driver and the rookies usually struggle in their first Coca-Cola 600. That is why I am fading William Byron and Darrell Wallace Jr. this week. Ragan has competed in this race enough to know how to save his car for the end of the race. He finished 13th at Kansas and should finish in the top 20 again this week. Ragan has the best average finishing position out of all the drivers in Group C on the 1.5-mile tracks this season so he is not that risky of a pick.