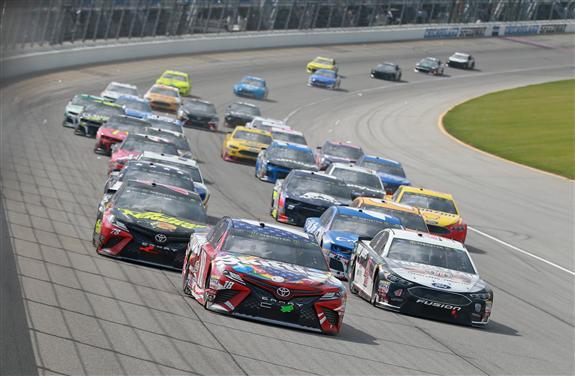 Paul Menard won the pole for the race at Chicago last year but he failed to lead a lap. Aric Almirola dominated the early portion of the race. He led a race-high 70, won Stage 1 and finished 25th. Kevin Harvick passed (and pissed off) his teammate, Kurt Busch on the last lap of Stage 2. Harvick led 39 laps, won Stage 2 and finished 3rd. Martin Truex Jr. started 36th because his far could not pass pre-race inspection. Truex was able to race all the way to the 3rd spot in Stage 1. Truex finished 4th in Stage 2 and finished 4th in the race. Kyle Busch and Kyle Larson fought for the lead in the last Stage. SLIDE JOB!!!!!!! SLIDE JOB!!!!!!! Larson slid up in front of Busch to take the lead on the last lap. Busch gained momentum and pushed Larson out of the way to win his 2nd race at Chicagoland Speedway.

Kyle Busch (4): Joe Gibbs Racing has been very good on the 1.5-mile tracks this season so I am rolling with 2 of their drivers for my Group A picks. Busch won this race last year by using the chrome horn to move Kyle Larson out of the way. If he has the chance to do the same Sunday he will do it again. Love him or hate him, you have to like having a driver on your team who will do anything to win. Busch should be a lock for a top-5 finish in Chicago.

Martin Truex Jr. (6): Truex is my pick to win Sunday. He won the last race on a 1.5-mile track (Charlotte) and it would not surprise anyone if he was in Victory Lane again Sunday. Truex has been the most consistent driver at Chicagoland Speedway over the last 3 seasons. He won the races in 2016 and 2017 and he finished 4th at the track last year. Truex is the best pick in the field on paper so I will use another allocation with the No. 19 car Sunday.

Kurt Busch (4): Busch has been very good in the races where the 550 HP engines and higher downforce package has been used. His finishes in these races are: 3rd, 5th, 6th, 9th, 7th, 27th and 2nd. Not too bad. The only problem with Busch this week is his luck at this track. He always runs up front but finds problems at the end of the race. Last year he finished 4th in Stage 1, 2nd in Stage 2, led 20 laps and finished 17th. Sooner or later his luck has to turn around. I will gamble with the No. 1 car this week.

Denny Hamlin (4): Hamlin is a hard driver to trust. He usually runs up front but he gets slapped with a speeding ticket or problems in the pits at the end of the race. I will use him this week because he has been able to stay out of trouble at Chicagoland Speedway. Hamlin finished 6th, 1st, 6th, 4th and 7th in his last 5 races at the track. I know the No. 11 car will be fast. The driver just needs to avoid mistakes in order for this to be an excellent pick.

Alex Bowman (8): Bowman has been good on the large oval tracks since the Cup Series left Texas. He finished 2nd at Kansas (very similar track to Chicagoland Speedway), 7th at Charlotte and 10th at Michigan. Bowman has never finished outside the top 10 at Chicago since he joined Hendrick Motorsports. He finished 10th in 2016 (while filling in for Dale Earnhardt Jr.) and 10th last year. Bowman has a lot of confidence right now and that should translate into a good run Sunday.

Daniel Suarez (7): I thought about going with Aric Almirola in this spot since he led the most laps in this race last year. I decided to go with Suarez instead because he is a safer pick than Almirola this week. Suarez has competed in 2 Cup Series races at Chicagoland Speedway and he finished 11th and 12th. He is running better this season than he was at Joe Gibbs Racing so I expect a top-10 finish from Suarez this week.

Chris Buescher (4): I wish I had 36 allocations with Buescher. He is by far the best driver in Group C. The problem is that I only have 4 allocations left with him. I plan to keep using Buescher and hope another driver from Group C improves in the 2nd half of the season. Buescher finished 10th at Kansas, 6th at Charlotte and 16th at Michigan. He should finish in the top 15 again Sunday.

Matt DiBenedetto (7): Daniel Hemric is the best choice to pair with Buescher. The problem is that I have been using that combination to much this season. I only have 2 allocations left with Hemric so I will use DiBenedetto istead (I would use Hemric if I had 4 or more allocations left with him). The No. 95 car has full support from Joe Gibbs Racing. They are starting to show some signs of life. I will roll the dice with DiBenedetto and hope this is the week he finally runs in the top 20.

I will post my final picks for Driver Group Game after the inspection Sunday afternoon.