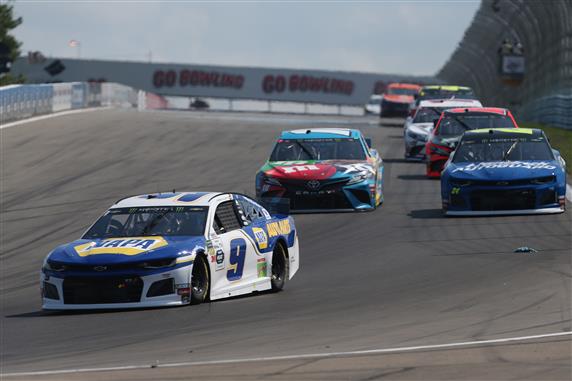 The Cup Series will travel to Austin, Texas for the first time Sunday. The fans have been lobbying NASCAR to add more road courses to the schedule and they will get their wish this week. The Cup Series will compete at Circuit of Americas (COTA) Sunday. This track was built to bring Formula 1 racing back to the United States and the 20 turns incorporates some of the best road courses in the world. It should be fun to see how the heavy stockcars can navigate this technical track.

Here are my picks for COATA…

Chase Elliott (7): Why should the Cup Series run the race Sunday? Just give Chase Elliott the trophy and let’s move on to Charlotte. Most people already have Elliott’s name on the trophy, but that is what most people said about Martin Truex Jr. last week at Dover. Elliott is going to be an excellent pick this week. He tested at COTA so Elliott has more laps on the track than most of the drivers in the field. Most crew chiefs have said the most similar track to COTA is Watkins Glen and Elliott won the last two races at the Glen. Elliott is the clear favorite this week, but I want to see him in practice and qualifying before I write his name in pen for my starting lineup.

Martin Truex Jr. (5): The reason why Chase Elliott is not the slam dunk winner for me this week is because Martin Truex Jr. is in the field. Truex also competed in the test at COTA and he is a bet better than Elliott on more technical road courses (Sonoma and Watkins Glen). Truex finished 2nd, 1st, 2nd, 1st and 1st in his last five starts at Sonoma and Watkins Glen. This race should be a battle between the No. 19 and No. 9 cars Sunday so it makes a lot of sense to have Truex and Elliott as our Group A drivers this week.

My goal in Group B this week is to find some good value picks, while saving my top drivers for more predictable tracks. Kyle Busch, Kyle Larson, Ryan Blaney, William Byron and Alex Bowman are all good picks this week but I want to save them for the more predictable tracks. The only driver from this list I would recommend selecting for your team is Kyle Larson. He has been the master at qualifying at Sonoma. Larson won the pole for the last three races at Sonoma and he will have a good chance to score bonus points for qualifying Sunday, but DO NOT USE LARSON IN THE RACE.

Kurt Busch (7): Kurt Busch should be a safe play this week. His season has been up and down but he should have some momentum after his decent run at Dover. Busch has finished fourth in his last two road course races and his average finishing position at the technical road courses tracks (Sonoma and Watkins Glen) over the last three years is 8.5. Busch should be able to score a top-10 finish at COTA.

Erik Jones (8): This is a good race to use an allocation with Erik Jones. He has been a reliable choice for Fantasy NASCAR lineups over the last three seasons on the road courses. Jones is not the first name that comes to mind at Sonoma and Watkins Glen but he has been pretty good. Jones finished 4th, 5th, 7th and 10th in his last four races at these tracks. The switch from Joe Gibbs Racing to Richard Petty Motorsports should not hurt Jones too much. He started 37th and finished 14th at the Daytona Road Course this year. He should be able to finish in the top 10 if he can qualify closer to the front.

Christopher Bell (7): Christopher Bell was nowhere near my radar for this race before the season started. Bell shocked every when he was able to win at the Daytona Road Course in February. Was that race a fluke? COTA is a more technical track but we get to see Bell in practice and qualifying before we need to decide if we want to use him in the race. I will have Bell on my team and if he shows the same speed he had at the Daytona Road Course, I will use him in my lineup.

Chris Buescher (9): Chris Buescher is always my sleeper pick on the road courses. He said he learned a lot from AJ Allmendinger when they were teammates at JTG Daugherty Racing. Buescher has a 12.5 average finishing position in his last four races on the technical road course tracks (Sonoma and Watkins Glen). He is have a great season so I would not be surprised if Buescher was able to finish in the top-10 Sunday.

AJ Allmendinger (8): AJ Allmendinger will be in the No. 16 for Kaulig Racing Sunday. Allmendinger is the best road course driver in the field. He would easily win this race if he was in a Hendrick Motorsports or Joe Gibbs Racing car. But how close to the front can Allmendinger get the No. 16 car at COTA? The only thing that can stop Allemndinger from finishing in the top-10 this week is mechanical problems with the car. Hopefully Richard Childress Racing built a good car for Allmendinger this week.

Austin Cindric (8): Austin Cindric will be behind the wheel of the No. 33 car for Team Penske this week. Cindric is a very good road course driver and his car should be better than AJ Allmendinger’s car. Cindric finished 2nd, 6th, 1st, 1st, 5th, 3rd, 2nd, 1st, 1st and 3rd in his last 10 road course races in the Xfinity Series (2.5 average finishing position). This is the race I had penciled in for Cindric in Group C before the season started. It could be a tough choice between Cindric and Allmendinger Sunday.

* Some leagues do not have AJ Allmendinger or Austin Cindric available in Group C. If this is the case, I recommend using Daniel Suarez (8) or Michael McDowell (6) this week. Both drivers have a lot of experience on road courses and should run well Sunday. I would use Suarez as my first choice and McDowell as my second choice. 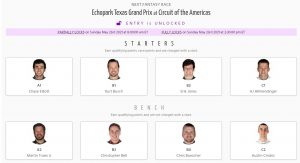