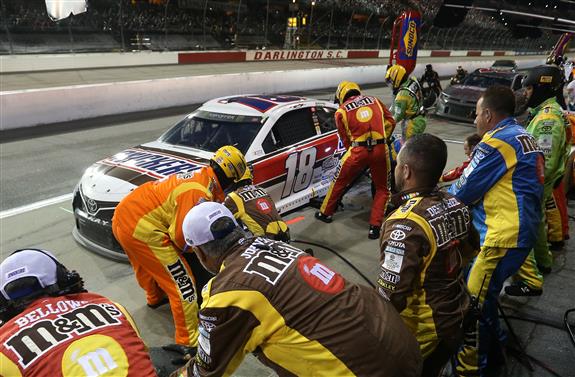 Finally we get to see some real racing. Don’t get me wrong, I enjoyed the Proinvitational Series as much as everyone else but there is just so much of the “making it up as we go” that I can take before I throw the controller at the TV.

It has been 71 days since we had cars on the track at Phoenix so the fans and drivers are really excited about the return of NASCAR. Hopefully the drivers can take it easy heading into turn 1 at Darlington. The excitement level should be through the roof for this race. NASCAR’s return to the track can be seen Sunday at 3:30 p.m. ET on Fox.

NASCAR will have a unique schedule to keep everyone safe. The teams will drive to Darlington from Charlotte on Sunday morning. They will inspect the cars and roll them to pit road without any practice or qualifying. The field is expected to be set by the owner’s points so that means Kevin Harvick should be on the pole. (*If NASCAR changes the way the field is set for the race Sunday, I will post updated picks). It would be nice to see the cars turn some laps before the start of the race, but I will take anything that NASCAR can give me right now.

* Before I get into the picks I want to give you my thoughts on NASCAR’s return to racing. The Covid-19 virus is unpredictable. It is great to have racing back, but for how long? I am not worrying about saving allocations. There is no guarantee that NASCAR will get all 36 races in this year or that all of the drivers will be able to stay out of quarantine, so my strategy is to use the best drivers each week until I run out of starts with them. I will figure out the races in October and November when and “if” we get to them.

Kevin Harvick: I plan to start Kevin Harvick Sunday. He starts from the pole and Rodney Childers is the best crew chief in the garage at adapting to a changing environment. Harvick finished 8th at Las Vegas, 9th at Auto Club and 2nd at Phoenix so he has been running pretty well this season. He has also finished 7 consecutive races at Darlington in the top 9 (with a 4th place average finishing position). This is the race to play it safe and Harvick is the safest driver in the field Sunday.

Kyle Busch: I was debating between Brad Keselowski and Kyle Busch for the 2nd driver on my team. It really does not matter since I know I am using Kevin Harvick in the race, but if you want to be a bit different from my picks, you can roll with either the No. 2 or No. 18 cars. Keselowski has been more consistent than Busch in 2020, but I think Joe Gibbs Racing will have more speed then they had on the west coast. Busch led the most laps at Darlington last year and he was chasing down Erik Jones for the win with 2 laps to go. Busch should be fast again Sunday.

Kurt Busch: I am loading my lineup with veteran drivers Sunday. These drivers have a lot of experience at one of the toughest tracks on the circuit so I trust them to keep their cars off the wall more than I trust a rookie. Darlington ranks as the 2nd-best track for Kurt Busch and the Chip Ganassi Racing cars were very fast in this race last year. Busch has a 5th-place average finishing position at the Track Too Tough to Tame since 2016. I will play it safe and use Busch Sunday.

Jimmie Johnson: I will pair Kurt Busch with the seven-time NASCAR champion (Jimmie Johnson) in my starting lineup. Johnson has performed well in the 550 HP aero packages this season and he ran well at Darlington last year. The No. 48 car finished 5th at Las Vegas and 7th at Auto Club. Johnson finished 2nd in Stage 1, 7th in Stage 2, had a 7.23 average running position (6th best) and finished 16th at Darlington last year (He was on old tires at the end of the race). I will place the fate of my team in the hands of another veteran driver Sunday, and the one with the most wins at this track.

Alex Bowman: Do you believe in momentum? If you do, Alex Bowman is your driver Sunday. He has been running well in the I-Racing Series (not that it has anything to do with the Cup Series) and he was running well earlier in the season (Bowman won at Auto Club). Darlington is a high tire-wear track and Bowman has been the best in the series at managing his tires. He won 2 of the last 4 races on high tire-wear tracks (Chicagoland and Auto Club). If you want to be different from everyone else in your league, take a chance with Bowman Sunday.

Erik Jones: I originally had Erik Jones penciled into my starting lineup for this race. I think Joe Gibbs Racing should be better than what they were on the west coast this season but I want to see it first before I pull the trigger and put the No. 20 car into my starting lineup. Jones won this race last year so he should have a lot of confidence Sunday and that could be important since there in no practice or qualifying. I plan to see how Jones runs Sunday and then possibly use him in the race Wednesday.

Tyler Reddick: Group C was tough this week. Do I roll the dice with veteran Matt Kenseth who hasn’t driven a car since 2018 or a rookie making his first Cup start at Darlington? I am going to wait until Kenseth gets one race to figure out the new aero-package before I use him so I will roll the dice with Tyler Reddick. He has been very good at this track in the Xfinity Series and the rookie likely would have had some top-10 finishes this year if it were not for missed lug nuts and a speeding penalty. He told Daniel Trotter Monday on SiriusXM NASCAR Radio, “Darlington is my favorite track and I am more excited than concerned about racing without practice.”

Cole Custer: Cole Custer had a lot of success at Darlington in the Xfinity Series. The Track Too Tough to Tame ranked as his best track. He won the race at Darlington last year and finished 2nd in 2018. Custer is also coming off a 9th-place finish at Phoenix. If you think Matt Kenseth may be too rusty and you do not trust Richard Childress Racing; Custer should be your pick.