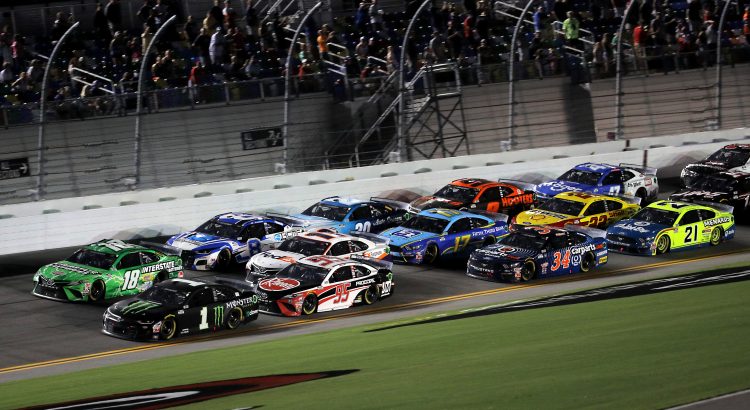 The Cup Series will compete in its third Superspeedway race this week when they travel to Daytona International Speedway. The secret to winning your league in the Driver Group Game is to manage your allocations properly. That means we must find drivers who we have a lot of allocations with this week and save our top drivers for the more predictable tracks.

Here is my starting lineup for the Coke Zero Sugar 400…

Denny Hamlin (2): It is tough to say that any driver is a lock for top-10 finish at Daytona, but Denny Hamlin is as close as it gets. Hamlin has finished 5th, 3rd and 1st in his last three races at Daytona. His strategy is to run up front to stay ahead of the wrecks. This strategy allowed Hamlin to win both Stages and finish 5th in the Daytona 500. Hamlin was the highest scoring driver in that race and he should be the highest scoring driver Saturday night. I will use one of my last allocations with Hamlin because there is plenty of talent in Group A to get use through the playoffs.

Allocation Saver is Ryan Blaney (8): Ryan Blaney has been really good on the Superspeedways. He crashed out of the Daytona 500, but he finished 2nd and 6th in the two races at Daytona in 2020. Blaney usually runs up front and scores a lot of Stage points. He averaged 10 Stage points per race at Daytona last year. Blaney will have momentum after his win at Michigan. He should be one of the top scoring drivers in the Driver Group Game Saturday night.

Austin Dillon (8): Austin Dillon has a lot to race for Saturday night. He is currently outside the playoffs and it will be difficult for the No. 3 team to make the field of 16 without a win. Dillon is no stranger to Victory Lane in the summer race at Daytona. He won the Coke Zero 400 in 2018. Dillon also finished 3rd in the Daytona 500 this year and he scored 14 Stage points in the race. I am not worried about his starting position. Dillon should quickly make his way to the front Saturday night.

Matt DiBendetto (8): I am going to roll the dice with Matt DiBenedetto Saturday night. The Wood Brothers always bring a fast car to the Superspeedways and DiBenedetto is used to racing under pressure. He has been on a hot-streak ever since the team informed DiBenedetto that he was being fired at the end of the season. DiBenedetto finished 6th, 5th, 11th, 11th, 9th and 10th in his last six races. I will use DiBenedetto and hope the hot-streak continues in Daytona.

Allocation Saver: Chris Buescher (9): Chris Buescher is one of the drivers who is well outside the playoffs who has a decent chance to win the race. He finished 3rd and 9th in the two races at Daytona last year and he finished 5th in both races at the track in 2018. Buescher typically works with Ryan Newman and the Team Penske drivers at Daytona. That is not a bad place to be on the track. I just need one of them to push Buescher to Victory Lane Saturday night.

Bubba Wallace (7): There are a lot of good picks in Group C Saturday night. I will take a chance with Bubba Wallace. He is one of the more underrated drivers on the Superspeedways and he must win in order to make the playoffs. Wallace has 8 races at Daytona on his resume and his average finishing position is 11th. Not too bad. He will have a lot of help from Denny Hamlin, Kyle Busch, Martin Truex Jr. and Christopher Bell in the race so they can get another Toyota into the playoffs.

Other Good Option: Michael McDowell (6): Michael McDowell will be the popular pick Saturday night. He won the Daytona 500 and he has not finished outside the top 14 at this track since 2018 (5 races). McDowell should be a good pick but how hard will the No. 34 team push it to win the race when McDowell is already locked into the playoffs. I am going to use the drivers who have more to race for this week.