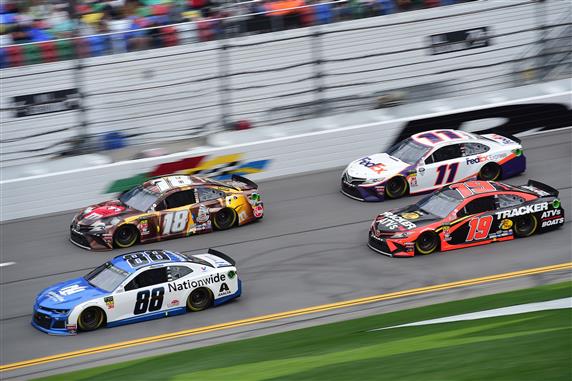 Superspeedway racing is back for the MENCS. It is not for everyone but the final laps are always exciting. The fireworks on the track will be just as good as the fireworks filling the sky after the race. The Coke Zero 400 can be seen Saturday night at 7:30 p.m. ET on NBC.

This will be the second race at Daytona for the MENCS but it could be different. The cars used the 2018 aero package in the Daytona 500. This week the cars will have the 550 HP engines, aero ducts, 2” splitter and 8” spoiler. I expect the racing to be mostly the same but there should be more lead changes. This aero package promotes closer racing from what we have seen in the past.

Hendrick Motorsports dominated qualifying for the Daytona 500. William Byron won the pole and Alex Bowman started second. The team has won eight of the last nine poles at the track. The race had a lot of lead changes. Four drivers were able to lead over 30 laps (Matt DiBenedetto 49 laps, Williams Byron 44 laps, Kyle Busch 37 laps and Denny Hamlin 30 laps). Only 14 cars finished on the lead lap so it was a typical Superspeedway race with a lot of wrecked cars. Joey Logano made a run for the lead at the end of the race but he could not get any help. Denny Hamlin held off the field and went to Victory Lane.

The most important thing to know this week is that you must save allocations with your Group B and Group C drivers. There are enough talented drivers in Group A to get you through the season but I still would not use Kyle Busch, Kevin Harvick or Martin Truex Jr. There are some drivers from Group B and Group C who have a history of running well at Daytona. These are the drivers we want on our team this week.

Joey Logano (4): Logano has been the best driver on the Superspeedways and it is not even close. Logano has finished six of the last seven races on these tracks in the top five. That is outstanding! He did have some bad luck in the last two Coke Zero 400s, but his consistency at this track over his career is too good to ignore. I have no problem using another allocation with Logano Saturday night.

Chase Elliott (8): Elliott will have a great chance to score bonus points for qualifying and he should run well in the race. Elliott has three poles in his career at Daytona, including the Coke Zero 400 last year. Elliott is a good Superspeedway driver. He led the most laps, scored 15 Stage Points and won the race at Talladega in April. His luck has not been as good at Daytona but it is not because he has not run well. Elliott will be a good pick for the race this week.

Ricky Stenhouse Jr. (6): Stenhouse sure made a lot of the drivers in this race last year. He did everything he could to stay up front, even if it meant spinning out other cars. I really do not care how he drivers as long as he finishes up front and that is usually what happens with Stenhouse at Superspeedways. I will use Stenhouse this week and save my allocations with the top drivers for the more predictable tracks.

Alex Bowman (7): Most people thought the No. 88 car would struggle on the Superspeedways when Dale Earnhardt Jr. climbed out of the car. That has not been the case. Bowman has the second-best driver rating on the Superspeedways and the second-best driver rating at Daytona. He finished both Stages in second-place and finished second at Talladega in April. He is one of the best picks in Group B this week.

Ryan Newman (8): If you want the safest pick in the field, Newman is your guy. The key to finishing up front on the Superspeedways is to avoid the wrecks. No driver is better at staying out of trouble than Newman. In the last eight races on the Superspeedways, Newman has completed 1,502 of 1,502 and he has a 9.8 average finishing. Are you kidding me!! He is either the luckiest driver on Earth or the best driver in the field at missing wrecks. I will roll the dice with the No. 6 car this week.

Ryan Blaney (5): Blaney has not won at a Superspeedway yet but that could change this week. He has a series-best 96.2 driver rating and has led a series-high 142 laps in the last five races at Daytona. Blaney also scored 15 Stage points in the Daytona 500 this year. His car is always one of the fastest but he has had problems avoiding wrecks at the end of the race. His luck will turn around at some point in his career. I am betting that is will happen Saturday night.

Matt DiBenedetto (7): Who led the most laps in the 2019 Daytona 500? Pat yourself on the back if you guessed DiBenedetto. He spent most of the race drafting with the drivers from Joe Gibbs Racing. That is not a bad place to be on the track. DiBendetto was able to score Stage points but he was wrecked at the end of the race. DiBendetto finished seventh in this race last year while driving for GO FAS Racing. He should be able to finish up front with an alliance with the JGR cars.

Michael McDowell (7): McDowell may be the most underrated driver at Daytona. He has the fourth-best average finishing position and the sixth-best driver rating in the last five races at Daytona. McDowell has finished six of his last seven races at this track in the top 15. That includes a fourth place finish in the 2018 Coke Zero 400. This is a great week to use McDowell in your lineup.