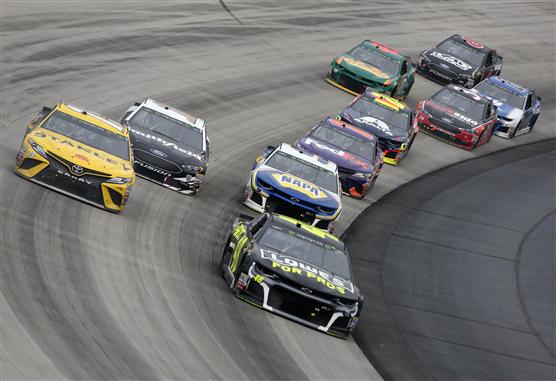 The Monster Energy NASCAR Cup Series will compete at Dover International Speedway this week in the Gander RV 400. The cars will be using the 750 HP engines with the 2” splitter, 8” spoiler and no aero ducts. This is the same package that produced some exciting racing at Phoenix, Martinsville, Bristol and Richmond. I expect the same this week. The race can be seen Sunday at 2 p.m. ET on Fox Sports 1.

Martin Truex Jr. (8): The Mayetta, N.J. boys loves racing at his home track. Truex has an average finishing position of 4.5 at Dover since 2015 (8 races). Last year he qualified 3rd and finished 4th in this race. Joe Gibbs Racing has been the best team using the current aero package. I expect them to dominate the race Sunday. Truex will have a good chance to win his 3rd race at the Monster Mile this week.

Kyle Busch (5): Dover is not the best track for Busch but even his stats at his worst tracks are better than most drivers are their best tracks. Busch is on a hot streak right now so I cannot fade him this week. He usually runs a lot better in the fall races at the Monster Mile but 2 of his 3 wins at the track have come in the spring. My plan is to use Martin Truex Jr. in the race and Busch for qualifying points. He won the pole for the last race at Dover, the race at Bristol this season and he has qualified on the front row in 3 of the last 4 races at Dover. I expect the No. 18 car to win the pole and earn bonus points for qualifying.

* Chase Elliott: If you are low with allocations with Kyle Busch and want to use another driver, Elliott is your guy. He has been “Mr. Reliable” at the Monster Mile. Elliott has started 6 races at Dover in his career. He has finished 5 of them in the top 5, including a trip to Victory Lane last October. Elliott has also scored Stage points in 7 of the 8 Stages at the track. He should run well Sunday.

Kurt Busch (7): Busch is the only driver who finished both races at Dover in the top 5 last year. Busch started 9th and finished 5th in the spring and he started 7th and finished 5th in the fall. Busch always runs well at the high-banked concrete tracks. He finished 2nd at Bristol last month. The No. 1 car has been really good this season. I expect Busch to add another top-5 finish to his 2019 resume this week.

Clint Bowyer (6): Bowyer may have had the fastest car at Bristol earlier this season. That should translate into another good run Sunday. Bowyer has never been to Victory Lane at the Monster Mile but he did finish 2nd in this race last year. Bowyer has been one of the best drivers this season without a win. He will have a good chance to find Victory Lane Sunday.

Daniel Suarez (8): Dover is the best track for Suarez. He has competed in 4 races at the Monster Mile and he has never finished outside the top 10. His average starting position at the track is 8.5 and his average finishing position is 6.75. That is pretty good. Suarez is having a good season. He finished 8th at Bristol last month. He should finish higher than that on the concrete surface of Dover.

Jimmie Johnson (7): You have to take a chance with Johnson this week. He has 11 wins, 3,105 laps led and finished 70% of his races at Dover in the top 10. Johnson ran well in the last2 races using the current aero package. He finished 10th at Bristol and 12th at Richmond. Johnson usually performs better at Dover than he does at those tracks. That means he should finish in the top 10 again Sunday.

Ty Dillon (6): When we evaluate Dillon for this race we need to look at his stats from 2019 and not what he did in previous years at the track. The No. 13 Chevy is outperforming their previous stats at almost every track in 2019. Dillon finished 15th at Phoenix, 13th at Martinsville, 15th at Bristol and 21st at Richmond in the current aero package. He should finish near the top 15 again this week.

Chris Buescher (5): We need to use our allocations with Buescher wisely. He has been the best driver in Group C this season. Buescher has spent a lot of time running in the top 10 while using the 750 HP engines this season. The problem is that he only has a 20.2 average finishing position. Sooner or later the No. 37 team is going to figure out how to finish as well as they run in the races. Buescher should run inside the top 15 again Sunday.