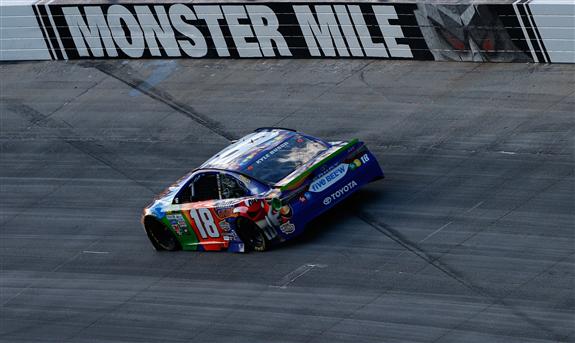 The Monster Energy NASCAR Cup Series will compete at Dover International Speedway this week in the AAA 400 Drive for Autism. This one-mile, high-banked speedway is one of my favorite tracks on the schedule. The race can be seen Sunday at 2 pm ET on Fox Sports 1.

Martin Truex Jr. won the pole and led the laps in the early portion of the last race at Dover. The race was dominated by two young drivers. Chase Elliott qualified 12th, led 138 laps and finished 2nd. Kyle Larson qualified 3rd and led a race-high 137 laps and finished 5th. Kyle Busch passed Elliott on the last lap of the race to win his 3rd race at the Monster Mile.

Jimmie Johnson is the best driver at Dover. He has 11 wins at the Monster Mile. Johnson said, “The track consists of a whole series of events. The cars can go airborne if they carry enough speed into the corners and it really gets your attention. The good thing is… you get to do it again and again and it is pretty fun if you have the guts to be aggressive at this track.” Some drivers are just better than others at Dover. We want to make sure we select the drivers with a history of running well at this track.

There are four drivers to choose from this week in Group A. Kyle Busch, Kevin Harvick, Martin Truex Jr. and Kyle Larson have been the best drivers at this track since the beginning of the 2016 season. You will want to select your drivers from this list. Since this track is similar to Bristol and the race in Thinder Valley was only a couple of weeks ago, I am using the two drivers who ran the best at Bristol. It should translate into success at Dover.

Kyle Busch (7) has everything going for him this week. He has won 3 of the last 4 races, including the race at Bristol and Busch is the defending race winner at Dover. The Monster Mile does not scare Rowdy. He has led laps in 5 of his last 6 races at the track and he has finished 1st or 2nd in 3 of the last 5 races at Dover. Busch should be a lock for qualifying points. He has an average starting position of 2.2 in his last four races at the track.

Kyle Larson (8) is my pick to win this week. Larson has never won at Dover but he has finished 2nd, 2nd and 3rd in his last 3 spring races at the track. Larson led the most laps in both races at the Monster Mile last year (241 in the spring and 137 in the fall). He also led the most laps (200) at Bristol last month. Dover ranks as the 3rd-best track for Larson so this will be a great week to use an allocation with him.

Chase Elliott (7) is the best choice in Group B this week. He came so close to winning the last race at Dover. He was leading with one lap to go and Kyle Busch passed him on the outside. Elliott has four races at Dover on his resume and he has NEVER finished outside the top 5. His average finishing position at this track is 3.2. He said last year that Jimmie Johnson and Jeff Gordon taught him how to race this track. It looks like they shared all of the secrets with Elliott because he is one of the best now.

Clint Bowyer (7) has been hit or miss at Dover in his career. I think he will be a hit this week. Bowyer is having a great season and he had one of his best races in 2017 at Dover. Bowyer qualified 19th and quickly made his way through the field for a 6th-place finish. The Stewart-Haas Racing cars have been very good this season so I want at least one of them in my lineup.

Erik Jones (7) only has two races at Dover on his resume and he finished 12th and 15th. Jones actually ran a lot better than where he finished. His average running position is 8th at the Monster Mile. He was involved in a last lap accident in this race last year and that hurt his stats. Joe Gibbs Racing runs very well t this track so I will have Jones on my team this week.

Daniel Suarez (9) will be a great pick for your team at Dover. If you believe in using a driver at his best tracks, this is the best one for Suarez. He qualified in the top 5 for both races last year and he finished 6th and 8th. After a slow start to the season the No. 19 team is starting to heat up. I would love to use an allocation with Suarez this week and save my better drivers for another track.

Darrell Wallace Jr. (9) is starting to find his groove in the MENCS. He led laps in 2 of the last three races. Wallace is on my team because of how well he ran at Bristol. He was up front leading laps but fell back at the end of the race. I expect the No. 43 team to bring the same car to the track this week and be a contender for another top 15 finish.

William Byron (8) has never competed in a MENCS race at Dover but he has two races in the Xfinity Series on his resume Byron finished 8th in his first race and 3rd in his 2nd race. He also won the pole for the last Xfinity Series race at Dover. Byron is a quick learner and the two best drivers (Jimmie Johnson and Chase Elliott) are his teammates. I expect Hendrick Motorsports to provide a fast car for Byron and teach him the skills he needs to keep it upfront Sunday.