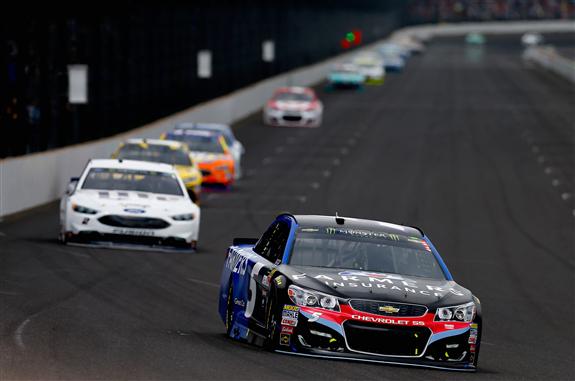 The MENCS competed at one of its most iconic tracks last week at Darlington and now they will travel to the most historic tracks in all of motorsports, the Brickyard. If Darlington is like Fenway Park in baseball, Indianapolis is like Wrigley Field. Do not expect great racing this week like we saw at the Lady in Black. The Brickyard is long and flat and it was not designed for 3,300 pound stockcars. We will likely see a similar race to what we saw at Pocono this year. It should still be fun to see teams fight for the final playoffs spots. The Big Machine Vodka 400 can be seen Sunday at 2 p.m. ET on NBC Sports Network.

Kyle Busch won the pole for the Brickyard 400 last year. It was his 3rd consecutive pole at the track. The No. 18 car led 27 laps, finished 5th in Stage 1 and finished 8th in the race. Clint Bowyer led 37 laps and won Stage 1. The No. 14 car finished the race in 5th place. Denny Hamlin and Kevin Harvick took turns leading laps. Hamlin led 37 and finished 3rd and Harvick led 22 and finished 4th. In the end Brad Keselowski used his fresh tires to run down Hamlin and win the race and kiss the brick.

Here are my picks for Indianapolis…

Kevin Harvick (3): I would really like to use Kyle Busch in this race but the No. 18 team keeps having problems and I only have two allocations left with him. The Yates Ford engines usually run well at Indianapolis because horse-power is always a factor. Harvick has a 5.4 average finishing position at the Brickyard since joining Stewart-Haas Racing. I would not be surprised if Harvick was kissing the bricks Sunday.

Brad Keselowski (6): Keselowski won this race last year and he will have a good chance to do it again. Pit strategy and fuel mileage always comes into play at Indianapolis and that plays right into the hands of the No. 2 team. The 550 HP aero package will bring the draft into play more this year and Keselowski is one of the best at manipulating the air. This is a great week to use Keselowski.

Clint Bowyer (2): I need to save my allocations with Denny Hamlin and Kurt Busch so I will take a chance with Bowyer. He is a hard driver to trust but he ran well last week at Darlington (One of his worst tracks). Bowyer currently sits 8 points above the cut line for the playoffs. The No. 14 team will use pit strategy and fuel strategy to score as many Stage points as possible. He finished 5th in this race last year. I expect a strong run from Bowyer under pressure at the Brickyard.

Erik Jones (2): The track that is most similar to Indianapolis is Pocono and the best driver at the Tricky Triangle this season was Jones. He finished 3rd in the June race and 2nd in July. Jones finished 2nd at the Brickyard 400 last year so he knows his way around this track.  Jones won last week and he could easily be back in Victory Lane Sunday.

Ryan Newman (7): Newman is a Hoosier native and he always runs well at his home track. Indianapolis ranks as his best track and it is not even close. His average finishing position at the Brickyard since 2016 is 6.5. Newman is tied with Daniel Suarez for the final spot in the playoffs. He needs points to advance and no driver is better than Newman at points racing. I plan to use an allocation with the No. 6 car Sunday.

William Byron (5): Byron is starting to mature before our eyes. He won the pole for the Daytona 500, the Coca-Cola 600 and the Southern 500. It would not surprise me to see him on the pole for the Brickyard 400 and score some bonus points. Byron has been to Victory Lane before at the Brickyard. Last year he outran Kyle Busch and Joey Logano to win the Xfinity Series race at Indianapolis. It was an impressive display of driving. Byron finished both races at Pocono this season in the top 10, so he should finish in the top 10 Sunday.

Matt DiBenedetto (5): I wish I could use Chris Buescher this week but I am down to 2 allocations with the No. 37 car and I want to save them for later in the season. DiBenedetto has really stepped up his driving this summer. He finished 17th in both races at Pocono this year and he should finish just inside the top 15 Sunday. I plan to burn another allocation with the No. 95 car this week.

Ty Dillon (3): Indianapolis has to be a special track for Dillon. He went to Victory Lane at the Brickyard in the Xfinity Series race in 2014. It is his only win in the Cup or Xfinity Series. Dillon has not been very good on the larger tracks this season but the team is starting to show some improvement. I have Dillon written down in pencil right now and if he posts fast laps in practice Saturday, I will write it in pen.

I will post my picks for Driver Group Game Saturday evening but check the website Sunday after qualifying for my updated picks.