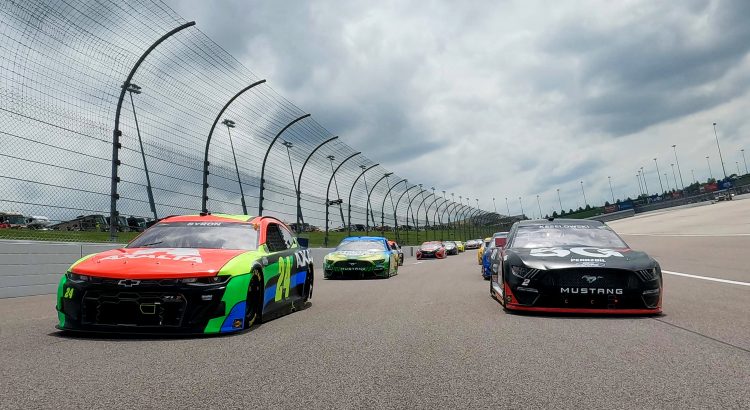 The NASCAR Cup Series playoffs will continue this week at Kansas Speedway. So how are you doing with your allocations in the Driver Group Game? I mapped out my allocations with each driver before the season started and moved them around based on performance throughout the season. I wish I still had some allocations with Kyle Larson, Denny Hamlin and Chase Elliott but I think we are still in good shape to make it through the race at Phoenix.

Here is my starting lineup for the Hollywood Casino 400…

Brad Keselowski (7): Brad Keselowski will be my driver for Group A this week. Kansas ranks as his second-best intermediate track (behind Las Vegas). Keselowski has finished 3rd, 4th and 2nd in his last three races at Kansas. He has been one of the best drivers on the 1.5-mile tracks this year. He finished 2nd at Las Vegas, 3rd at Kansas in May and 4th at Texas last week. The No. 2 team is the best at using pit strategy to finish up front at Kansas. I will take my chances with Keselowski Sunday.

Allocation Saver is Ryan Blaney (6): Ryan Blaney’s stats at Kansas look awful on paper. He finished 21st, 7th, 20th and 21st in his last four races at the track. When you watch the race though, Blaney looks like one of the best picks in the field. He was running third at Kansas in June with only two laps to go. He got loose while racing Kyle Larson for the lead and they both fell back though the field. Blaney will be fast and he just needs some better luck to finish up front Sunday.

Kyle Busch (1): I have been saving my last allocation with Kyle Busch for this race. He won the last race at Kansas but he almost had to win. The race was the Buschy McBusch 400 and it was on his birthday. Will the stars align for the No. 18 car to make another trip to Victory Lane at Kansas? I think Rowdy has a good chance to punch his ticket to Phoenix this week. He finished 2nd, 3rd and 5th in the three playoff races at Kansas using the current aero package. He should battle Kyle Larson for the win in the Hollywood Casino 400.

Tyler Reddick (2): I have two allocations left with Tyler Reddick and that is probably a mistake. I should have started using the No. 8 car earlier in the season. Reddick has been good on the 1.5-mile tracks this season. He finished 7th (Kansas), 9th (Charlotte), 6th (Atlanta), 6th (Las Vegas) and 9th (Texas) in his last five races on the 1.5-mile tracks. He should have a good chance to finish in the top-10 again Sunday.

Best Choices for Group B: Kyle Larson is the best choice for Group B. You need to use the No. 5 car if you have any allocations left with Larson. He is a lot better on the 1.5-mile tracks than he is at Martinsville and Phoenix. William Byron is another great pick for Sunday’s race. I only have one allocation left with Byron and I need to save it for Martinsville. Use Byron over Tyler Reddick if you have two or more allocations left with the No. 24 car.

Allocation Saver for Group B: Matt DiBenedetto would be a good choice if you are out of allocations with the drivers I listed above. DiBenedetto is racing for a job next year and time is running out for him to prove he can win in the Cup Series. DiBenedetto finished fourth at Kansas in June. He should have a good chance for a top-10 finish Sunday.

Allocation Saver: Daniel Suarez (5) is the driver for you if you believe in track history. Kansas ranks as one of the best tracks for Suarez. He finished 18th at Kansas in a Gaunt Brothers Racing car last year and he finished 11th at Kansas in May in his Trackhouse Chevy. Suarez finished 10th last week at Texas. He should have the speed and talent to compete for a top-15 finish Sunday.