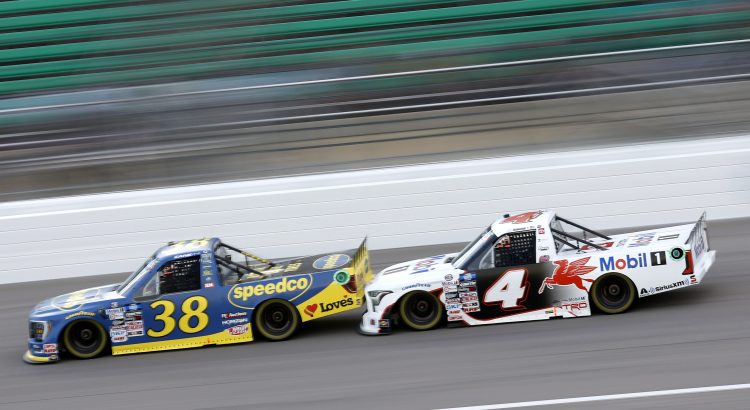 The NASCAR Cup Series will compete in the second race in their playoffs when they travel to Kansas Speedway this weekend. The Driver Group Game picks got off to a hot start in the playoffs by scoring 374 points at Darlington. The picks have been on fire this summer, so hopefully the hot-streak will continue in the Heartland. The Hollywood Casino 400 can be seen Sunday at 3 p.m. ET on USA Network.

I wrote in the preview article for the race at Darlington that I did not think the non-playoff drivers would move out of the way and give the playoff drivers all the room they needed on the track. That was the case in the Southern 500 when Martin Truex Jr. dominated the race and Erik Jones went to Victory Lane. Do not be afraid to play some of the non-playoff drivers again this week. They will race just as hard as the drivers competing for the championship.

There are only nine races left in the season. We can use some of the drivers we have not used much this year at Talladega and the Charlotte Roval so that means we have seven races left to use our top drivers. Do not worry about saving allocations. Use the best drivers you can at Kansas.

Here are the picks for the Hollywood Casino 400 …

KYLE BUSCH (4): Busch dominated the first race at Kansas and it could happen again Sunday. The race in May at Kansas was dominated by Kurt Busch and the race this week should have Kyle up front. Rowdy has been one of the best drivers on the 1.5-mile tracks this year. He finished fourth at Las Vegas, third at Kansas and second at Charlotte. He also had the best car last week at Darlington. Busch is my pick to win Sunday at Kansas.

DENNY HAMLIN (8): I wanted to use Kyle Larson in this spot since he finished second at Las Vegas, second at Kansas and ninth at Charlotte, but the No. 5 team has had engine problems in back-to-back races. I will fade Larson and pivot to Hamlin. The No. 11 car has also been good on the 1.5-mile tracks. Hamlin finished fourth at Kansas in May and won the Coca-Cola 600 at Charlotte. He also looked great last week. I will go with two drivers from Joe Gibbs Racing this week since Hendrick Motorsports has some engine problems they need to figure out.

CHRISTOPHER BELL (2): Bell is a lock for all lineups if you have any allocations left with the No. 20 car. He has been the most consistent driver this year on the intermediate tracks. Bell finished 10th at Las Vegas, fifth at Kansas, fifth at Charlotte, sixth in the first race at Darlington and sixth last week at Darlington. His average finishing position at these tracks is 6.4. I do not mind having three drivers from Joe Gibbs Racing in my lineup Sunday.

TYLER REDDICK (3): Reddick is the driver I will most likely start with Christopher Bell in my lineup Sunday. Reddick was a lot better than his finishing position in the first race at Kansas. Reddick qualified second, scored seven Stage Points, led 14 laps but had an issue and finished 30th. Reddick bounced back the next week and finished sixth at Charlotte. The No. 8 car has finished the last three races in the top-seven, so Reddick has some momentum this week. I will roll with the No. 8 car at Kansas.

ROSS CHASTAIN (3): I felt a lot better about this pick in July than I do now. Chastain got off to a blistering hot start in 2022, but he has fallen off a cliff in the last two months. Chastain has finished 20th, 33rd, 21st, 18th, 24th, 27th and 32nd in his last seven races. That sucks, but a trip to Kansas should get him back on track. He has been really good this year on the 1.5-mile tracks. I will take my chances with Chastain Sunday.

BUBBA WALLACE (5): The last choice for Group B came down to Joey Logano, William Byron and Bubba Wallace. The 1.5-mile tracks have been the worst tracks for Logano so I will fade the No. 22 car. I do not trust Byron so I will take a chance with Wallace. He has been running well this summer. Wallace has a 10th-place average finishing position in his last eight races this summer. 23X1 dominated the last race at Kansas so I want at least one of their drivers in my lineup Sunday.

* I will replace Bubba Wallace with Kurt Busch if Busch is able to race Sunday. Busch led 116 laps, score 10 Stage Points and won the race at Kansas in May. I know he may have some rust after being out of the car for a month, but I cannot fade those stats. It doesn’t sound like he will be in the car though.

AUSTIN CINDRIC (3): I thought about using Erik Jones or Daniel Suarez at Kansas but both drivers have been horrible on the 1.5-mile tracks this year. Jones finished 31st (Las Vegas), 32nd (Kansas) and 14th (Charlotte). Suarez finished 37th (Las Vegas), 33rd (Kansas) and 25th (Charlotte). I will pivot to Cindric. He qualified fourth, scored seven Stage Points and finished 11th at Kansas in May. He should be a decent pick Sunday.

* TY GIBBS (3): I pray that Kurt Busch can get healthy and return to the No. 45 car, but if he cannot race I will be thrilled to start Gibbs as my Group C driver. He has been decent on the intermediate tracks. Gibbs finished 10th at Michigan and 15th last week at Darlington. 23XI had two fast cars at Kansas in May, so I will play Gibbs if he is in the car Sunday.

* If Ty Gibbs is not in the race, I will pivot to Daniel Suarez. I know the No. 99 car has not had good finishes on the 1.5-mile tracks this season, but he is the driver I trust the most to pair with Austin Cindric.

* I am out of allocations with John H. Nemechek. I would use Nemecheck over Zane Smith if I could.

* This is the last scheduled race for Ryan Preece so it would be a good idea to use him tonight.