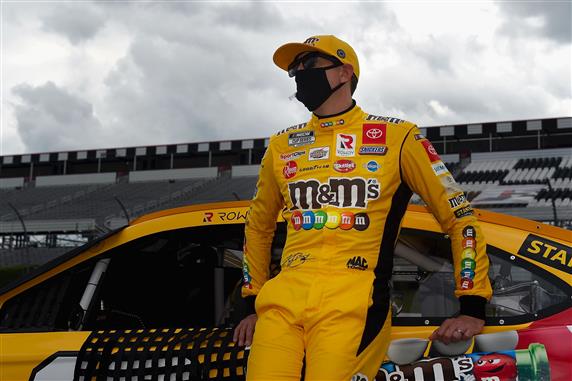 After a season of terrible luck in the Driver Group Game, I really thought the picks were going to strike gold in Indianapolis. We had Denny Hamlin leading, Matt Kenseth 3rd and Aric Almirola 5th with 11 laps to go. The bad luck continued as Hamlin had a tire explode and sent him into the wall. We really cannot catch a break but I will do my best to turn this season around. We still have not reached the half-way point of the season so we still have some time to climb to the top of our league standings.

Kentucky was repaved before the 2017 season. The track also added in progressive banking and that made the track a 1.5-mile tri-oval with similar banking to Las Vegas, Chicagoland and Kansas. NASCAR also applied the traction compound to provide more grooves to race in. It worked. The racing often went four-wide and provided one of the closest finishes (between the Busch Brothers) last year.

Here are my picks for the Quaker State 400 …

So what do you believe in? Recent success or track history? Kevin Harvick, Denny Hamlin and Chase Elliott have been the class of the field on the 1.5-mile tracks but their track history at Kentucky is only good and not great. Kyle Busch and Joey Logano have been awesome at Kentucky but both teams are in a slump right now. It would be great if we had a practice to see what each team is bringing to the track Sunday.

(Start) Joey Logano: The most similar track to Kentucky is Las Vegas. Both tracks are tri-ovals with nearly the same banking. Joey Logano won in Sin City earlier this year but hasn’t been the same since on the 1.5-mile tracks. He should get back to normal this week. Logano had this race won last year but a late race caution killed his four second lead. Logano also has crew chief with the most wins at Kentucky (Paul Wolfe) calling the shots. This should be a good race to use an allocation with Logano.

(Bench) Kyle Busch: I thought about using Kyle Busch since he starts on the pole but he also started on the pole at Las Vegas (most similar track to Kentucky) and Busch finished 15th. The stats suggest he is a lock for a top-four finish Sunday. Busch has competed in nine races at Kentucky and his average finishing position is 4th. He has two wins and two runner-up finishes. Busch also has never finished worse than 3rd in any Stage at Kentucky. Busch “should” be a safe pick Sunday but I trust Joey Logano more Sunday. .

* I picked Kevin Harvick to win but I am saving his allocations for the tracks where he has better stats at.

(Start) Aric Almirola: Aric Almirola is on fire right now. He has five consecutive finishes in the top five and those were on some of his worst tracks. Now Almirola gets to compete at where has had a lot of success at in the No. 10 car for Stewart-Hass Racing. I am a believer in momentum in Fantasy NASCAR so I will play the hot had with Almirola this week. I am not worried about running out of allocations with the No. 10 car before the playoffs begin.

(Start) Alex Bowman: Alex Bowman wasn’t even on my radar until I talked to one of my friends who works on the cars. He told me to forget Homestead and Atlanta and focus on the races at Las Vegas and Charlotte for who will be fast Sunday. Bowman led 29 laps at Las Vegas, 164 laps in the first race at Charlotte and 54 laps in the second race at Charlotte. Bowman did not get the finishes he deserved, but the No. 88 car was fast. Bowman starts 5th so he will have the track position to score a lot of Stage points and finish in the top 10 Sunday.

(Bench) Matt DiBenedetto: This is a good week to take a chance with Matt DiBenedetto. He starts 10th and should have a good chance to finish in the top 10. Paul Menard started 14th, finished 10th in Stage 1, 9th in Stage 2 and finished 11th in the race at Kentucky last year. DiBenedetto has been able to get a lot more out of the car than Menard ever did. The most similar track to Kentucky is Las Vegas and DiBenedetto finished 2nd in that race earlier this season. I will sign off on rolling the dice with the No. 21 car Sunday.

(Bench) Ryan Blaney: Ryan Blaney has to be happy to get away from the large, flat tracks and back to the 1.5-mile tracks. Blaney has a series best 4.8 average finishing position on the 1.5-mile tracks this season. He finished 3rd, 3rd, 4th and 3rd in his last four races and led laps in three of them. Blaney finished 2nd at Kentucky in 2018.. His crew chief (Todd Gordon) dominated this race last year with Joey Logano. It could be Blaney’s turn to dominate the race Sunday. I am saving my allocations with Blaney for Texas and Kansas.

(Allocation Special) Austin Dillon: Do you know who has the 4th best average finishing position on the 1.5-mile tracks this season? Better then Kevin Harvick, Denny Hamlin, Joey Logao and Kyle Busch? It is Austin Dillon. The No. 3 car finished 4th at Las Vegas, 14th in the Coca-Cola 600, 8th at the second race at Charlotte, 11th at Atlanta and 7th at Homestead. That is an 8.8 average finishing position. If you are concerned wih saving allocations, Dillon is your driver this week.

(Start) Matt Kenseth: Matt Kenseth found the Fountain of Youth last week with his 2nd place finish at Indianapolis. Will he keep the hot streak going at Kentucky? Kyle Larson finished 4th, 9th and 2nd in his last three starts at Kentucky. Kenseth was asked why he ran so well last week. He said, “I have not had a lot of communication with the team. They have been giving me cars with (Kyle) Larson’s setup and it hasn’t worked for me. This week I finally got time to take to Chad (Johnston) and work on my setup. We will be using my setups from now on.” That sounds good to me. I will use another allocation with Kenseth Sunday.

(Bench) Christopher Bell: Christopher Bell is starting to show signs of life after his slow start to the season. This is a good track for Toyota so I expect Bell to run well even though he starts deep in the field Sunday. Bell ran two races in the Xfinity Series at Kentucky and he won in 2018 and finished 2nd last year. Kentucky ranks as his 2nd best track so there is no reason to be concerned with his starting position this week.

* Tyler Reddick is the next best option behind Matt Kenseth but I am saving his allocations for some other tracks. I would use Reddick if I had 5 or more allocations with the No. 8 car.