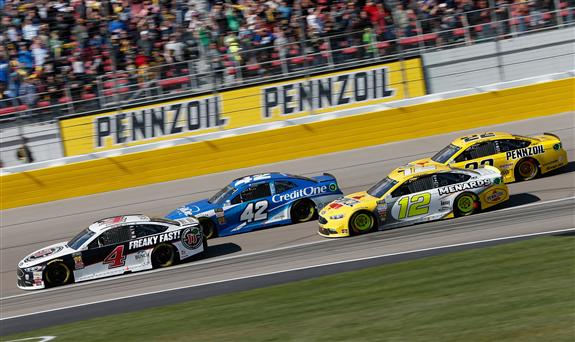 The Cup Series will travel across the country to compete at their first 1.5-mile track. It is time to see the teams put their cards on the table in Las Vegas and show us what they have for the 2020 season. Las Vegas Motor Speedway has historically been a Team Penske Racing track. Will Joe Gibbs Racing, Stewart-Haas Racing or Hendrick Motorsports be able to dominate the race? This race will tell a lot about the 2020 season. The Pennzoil 400 can be seen Sunday at 3:30 p.m. ET on Fox.

Kevin Harvick: Harvick lead the Cup Series in Driver Ranking on the 1.5-mile tracks last year, had the best Driver Ranking from the two races at Las Vegas and he had the second best average finish at the 1.5-mile tracks in the playoffs last year. Harvick finished 2nd and 4th in the two races in Sin City in 2019 and he won one pole, led 135 laps and scored 35 Stage points. To say he was a good pick is an understatement. Harvick should be just as good Sunday. The No. 4 car posted the 4th fastest speed in final practice and the fastest long-run speed. I expect Harvick to dominate this race.

Ryan Blaney: Blaney has finished three of his last four races in Sin City in the top 5. He will be paired with the crew chief that won this race last year, Todd Gordon. His crew chief knows how to set up a car for this track so that should help Blaney Sunday. The No. 12 car posted the 8th-fastest speed in final practice but the car was consistently fast. Blaney had the 3rd-fastest car when you combine the speeds from the two practices. The No. 12 car finished 5th in the last race at Las Vegas and it would not surprise me if Blaney was in the top-5 again Sunday.

Aric Almirola: There was no driver in the garage who was as happy with their car as Almirola. He went out and made some long runs and said, “This is the best setup we have ever had.” Almirola usually gets off to a hot start and then fades over the summer so it would be a good idea to use an allocation with him now. Almirola finished 7th in this race last year. He should battle for a top-5 finish Sunday.

Ross Chastain: Chastain will be filling in for Ryan Newman in the No. 6 car and this is a good chance to get a start from him in good equipment in the Driver Group Game. Chastain won the Xfinity Series race at Las Vegas in 2018 so he knows his way around the track. Chastain made a lot of long runs and pit road stops in practice. He wanted to get familiar with the car and the pit signs. The team was amazed that Chastain was able to post faster speeds than Newman in the car. Chastain was 6th-fastest in final practice with the 3rd-fastest long-run speed. If you do not use an allocation with Chastain this week, you will regret it later in the season when allocations in Group C are hard to find.