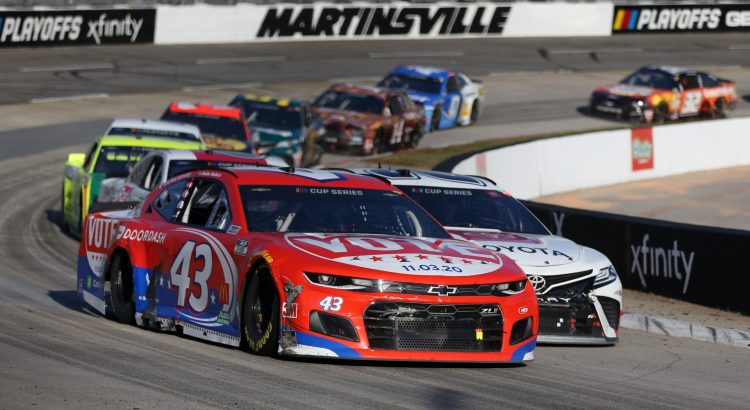 The NASCAR Cup Series playoffs will compete this week at Martinsville Raceway. This will be the last chance for the playoff drivers to earn a spot in the Championship Four at Phoenix. Kyle Larson already has his spot secured, so the other seven drivers will beat and bang on each other in order to earn one of the last three spots that are left to be filled. It should be fun to watch. The Xfinity 500 can be seen Sunday at 2 p.m. ET on NBC.

The cream usually rises to the top in the playoffs so the eight drivers competing for the championship are usually the best picks. It will be important to understand what the strategy the playoff drivers will use this week because it will determine how many fantasy points they are likely to score in the race.

Kyle Larson won both races in the Round of Eight. The No. 5 team will likely be more focused on next week’s race at Phoenix. Larson will likely give up Stage points to go after the win Sunday. It will be a better idea to save Larson for Phoenix if you have any allocations with the No. 5 car.

Chase Elliott and Denny Hamlin are my favorite picks this week, but I am out of allocations with both drivers. Elliott earns a spot with a win or a 15-place finish, even if he does not score any Stage points. Hamlin will earn a spot with a win or a 12th place finish, even if the No. 11 car does not score any Stage points. Both drivers will simply try to earn as many Stage points as possible since they have an easy path to Phoenix on points. I expect Elliot and Hamlin to be the highest scoring drivers this week. I would use Elliott first and Hamlin second if you have any allocations left with these cars.

Kyle Busch, Ryan Blaney, Martin Truex Jr. and Brad Keselowski are separated by seven points. These drivers will try to score Stage points in Stage 1 and then see where they are in the Point Standings at the end of Stage 2. If the drivers are behind, they will likely give up Stage 2 points to go after the win. I like Truex the best from this group and Blaney second.

Joey Logano is 26 points behind his competitors, so the No. 22 car will likely need a win to advance to Phoenix. Logano is the riskiest pick this week because I doubt the No. 22 team will car very much about Stage Points. Logano will be focused on the win and he will use a risky strategy to get his car up front at the end of the race.

Group A Pick: Martin Truex Jr. (4) has been the best driver in the last four races at Martinsville and it is not even close. Truex won 3 of the last 4 races at this track, averaged 14 Stage Points per race and averaged 186 laps led. That is domination. I still like Chase Elliott and Denny Hamlin slightly more, but Truex is a great pick if you are out of allocations with the No. 9 and No. 11 cars.

Other Good Choice: Ryan Blaney (6) has been nearly as good as Martin Truex Jr. at Martinsville in the 750 aero package. While Truex has been winning the races, Blaney has been finishing second. The No. 12 car finished second in both races at Martinsville last year. He also won both Stages and led 157 laps at Martinsville in April. Blaney should be the best driver from Team Penske team Sunday.

Group B Driver: William Byron (1) will be one of my picks for Group B. I only have one allocation left with Byron and he is slightly better at Martinsville than he is at Phoenix. Byron started 3rd, finished 6th in Stage 1, finished 7th in Stage 2, led 9 laps and finished 4th at Martinsville in April. He also finished 8th at Martinsville last year. Byron looks like the best of the non-playoff drivers right now so he will get a spot in my lineup.

Group B Driver: Alex Bowman (1) will be my second driver for Group B. I had to make a decision between Bowman and Christopher Bell. I only have one allocation left with each driver. Their starts at Martinsville are about the same but Bell blows out Bowman at Phoenix, so I need to save the No. 20 car for next week. Bowman finished 6th in both races at Martinsville last year. You cannot go wrong with two Hendrick Motorsports drivers in your lineup Sunday.

Other Good Choice for Group B: Kurt Burt (0) would be a good choice Sunday. I am out of allocations with the No 1 car. I would use him over Alex Bowman. Busch has been pretty consistent at Martinsville. He has finished 4 of his last 6 races at the track in the top-10. That includes a 9th-place average finishing position at Martinsville in the 750 HP aero package. Busch should be a safe pick Sunday.

Group C Driver: Bubba Wallace (6) will be my pick for Group C Sunday. Wallace does not have many wins in the three top series of NASCAR, but he does have two wins at Martinsville in the Truck Series on his resume. Wallace started 25th and finished 16th at Martinsville in April. He has been running well lately (Wallace has a 15th-place average finishing position in the playoffs), so I will take a chance with the No. 23 car Sunday.

Other Good Choice: Ross Chastain (1) should be a good choice this week. He has been the best driver from Group C on the tracks where the 750 HP aero package has been used. Chastain finished 7th at Richmond and 17th in the race at Martinsville in April. Chastain has shown a lot of improvements since April. I am saving my last allocation with Chastain for Phoenix, but he would be a good choice if you do not trust Bubba Wallace.