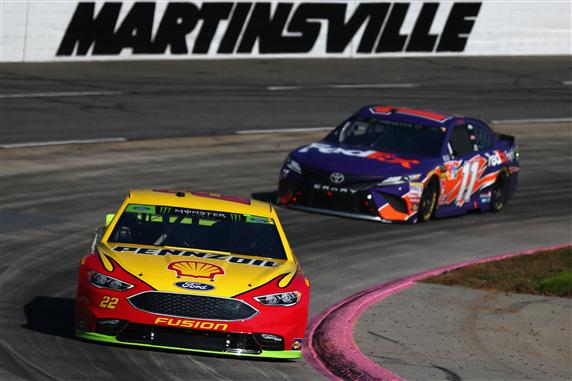 The Monster Energy NASCAR Cup Series will travel back to the east coast for some short-track racing at Martinsville Speedway. If any driver has a score to settle, it will happen at this track (Daniel Suarez vs. Michael McDowell or Joey Logano vs. Martin Truex Jr. comes to mind). Beating and banging is just part of the racing at this track. It should be exciting to watch. The STP 500 is scheduled for 2 p.m. ET on Fox Sports 1.

There will be no track activity for the MENCS Friday. The cars will make their first laps in the first practice at 9:30 a.m. ET (FS1) Saturday. Final practice will be at 12:30 p.m. ET (FS1).  Qualifying will be at 5 p.m. ET (FS1), after the Gander Outdoor Truck Series race. Our lineups must be set by 7 a.m. ET Saturday. Do not forget.

Kyle Busch won the pole for the last race at Martinsville (October 2018). He led 100 laps and finished fourth. Denny Hamlin took over the lead and won Stage 1. Hamlin almost won Stage 2 but he was passed by Joey Logano on the last lap. The No. 22 car took over the race in the final Stage. Logano led 309 of the 500 laps. It was an epic battle between Martin Truex Jr. and Logano in the final 10-lap of the race. In the end, Logano decided to move the No. 78 car and secure his spot in the championship race. Will there be payback this week? We will see…

Martinsville is a rhythm track. Drivers either know how to turn fast laps at this track or they don’t. We will not see a driver who has never finished in the top 10 at Martinsville show up and run well. You need to concentrate on the drivers who have had success in the past. Also, track position will be very important. Martinsville is the hardest track on the circuit to make a pass so the drivers starting up front should stay there for a good portion of the race.

Kyle Busch (8): There is nothing bigger in NASCAR than Busch’s ego. He will be flying high after winning his 200th race across the top three series of NASCAR. Busch leads the MENCS in driver rating (129.5), laps led (582) and average finishing position (2.2) in the last four races at Martinsville. He also get his typical “warm-up race” since he will be bullying the boys in the Gander Outdoor Truck Series race Saturday. Like him or hate him, Busch is the best pick in the field Sunday.

Joey Logano (6): The Driver Group Game awards 10 bonus points for winning the pole. Logano is almost a lock to score qualifying points this week. He has 4 poles in the last 8 races at Martinsville and has qualified on the front row in 6 of the last 8 races. Even if we do not use him in our starting lineup, we could use the extra 10 bonus points. Logano should be good in the race too. He dominated the last race at Martinsville last October. Logano led 309 of the 500 laps and politely asked Martin Truex Jr. to move over so he could win the race. I am not worried about retaliation between the two drivers.

Denny Hamlin (7): Hamlin has been on quite the hot streak this season. His 6.8 average finishing position through the first five races is second-best to Kyle Busch. Now Hamlin gets to compete in his home state at one of his best tracks. Hamlin has the second-most wins at Martinsville (5) behind Jimmie Johnson. We have to keep an eye on him in practice though. Hamlin has performed really well in October at this track and has been hit or miss in March. It will be nice to have him on the team just in case the “good Hamlin” shows up Sunday.

Clint Bowyer (7): Bowyer must be on every team this week. Martinsville is by far his best track. Bowyer won the STP 500 last year and he should have a good chance to do it again. Drivers need to know how to save their brakes, have the rhythm to get on and off the gas at the right time and be aggressive enough to move people without damaging your car. Bowyer knows all of these skills well. This is a great week to use an allocation with Bowyer.

Jimmie Johnson (8): We have to take a chance with the seven-time champion at some point this season, right? Well there are few tracks better for Johnson then Martinsville. He leads the MENCS in wins (9), laps led (2,863), Driver rating (119.8) and average finishing position (8.01) at Martinsville. Johnson is showing some signs of life this season. Downforce and horsepower will not matter much at NASCAR’s shortest track. Johnson should be able to finish in the top 10 Sunday.

Ryan Newman (8): I really wanted to use Ryan this week. Ryan Blaney that is. Blaney lead 145 laps in this race last year, but I am down to 6 allocations with Blaney. I will use Ryan Newman instead. Newman is the hardest driver in NASCAR to pass and Martisville is the hardest track in NASCAR to make a pass at. That is a marriage made in heaven. Newman just needs track position and then it is good luck to the competition trying to pass him. Newman finished 8th at Martinsville last October. I think he can score a top-10 finish Sunday.

Chris Buescher (7): The choices in Group C are not very good this week. The rookies (Daniel Hemric and Ryan Preece) do not have much experience at this track. Buescher should have the best chance at a top 20 finish. Last October Buescher qualified 23rd and finished 13th. He also finished 11th at Martinsville in 2017. Buescher has been running well this season so I will use him as my top driver from this group.

Ty Dillon (8): The final choice in Group C came down to Michael McDowell and Ty Dillon. Both have experience at Martinsville and both have had some success. McDowell cannot avoid mistakes this season so I will go with Dillon. Last October Dillon qualified 23rd and finished 15th at Martinsville. The No. 13 team has shown a slight improvement this season so there is a chance Dillon could finish in the top 15 again Sunday.