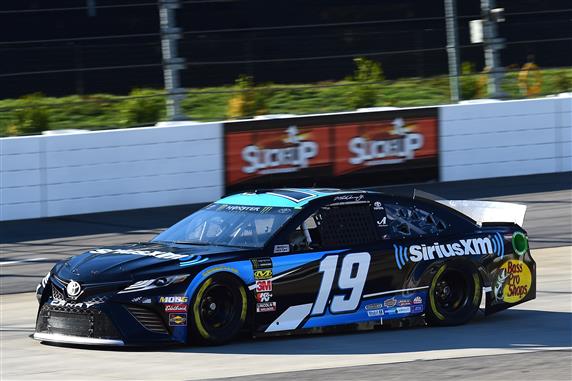 And then there were eight… The Round of 8 has been set and if one of them wins Sunday, they will be the first driver locked into the championship race at Homestead. This race often gets crazy because the only way to pass is to move a driver out of the way and there is a lot on the line for the 8 playoff drivers. We have seen fireworks at the end of this race in the past and I expect everyone will remember the end of this race for years to come. The First Data 500 can be seen Sunday at 3 p.m. ET on NBC Sports Network.

Kyle Busch (1): It is no secret that Busch hates the aero package NASCAR decided to use on the large tracks this season. That probably explains why he has been excellent on the short tracks and just good on the intermediate tracks. Busch has a series-high 125.4 Driver Rating and a series-best 2.4 average finishing position in the last 5 races at Martinsville. Here are his last 8 races at the track: 3rd, 4th, 2nd, 1st, 2nd, 5th, 1st and 5th. Not bad. This is the best track on the schedule to use your last allocation with Busch.

* I picked Denny Hamlin to win but I am saving him for one of the final 3 races because Clint Bowyer and Ryan Blaney also looked very good in practice. I am not so sure Blaney and Bowyer will look this good in the final 3 races. If you have more than one allocation with Hamlin, I would use him over Bowyer.

Clint Bowyer (1): Martinsville ranks as the 2nd-best track for Bowyer. He has finished 4 of the last 5 races at this track in the top 7. Bowyer led 215 laps on his way to Victory Lane at Martinsville last year. In March he qualified 10th, scored 6 Stage points and finished 7th. I have been saving my last allocation with Bowyer for this race. This is a rhythm track and Bowyer has the beat down pat. I will use my last allocation with Bowyer at one of his best tracks.

Ryan Blaney (1): Blaney surprised many people by advancing into the Round of 8. If he wants to advance to Homestead, he may need to win the race Sunday. Martinsville ranks as his best track left on the schedule. Team Penske switched up their pit crews this week to make sure Joey Logano and Blaney had the best guys to pit the car. Blaney looked fast in practice so I will use my last allocation with him Sunday.

Matt DiBenedetto (2): DiBendetto has been has been really good on the short tracks and really bad on the large tracks. There are two races left on short tracks and two left on intermediate tracks. I plan on using one of my last allocations with DiBenedetto Sunday. He only finished 20th in the spring race at Martinsville but the No. 95 team has improved a lot since the beginning of the season. I expect DiBenedetto to run in the top 15 Sunday.