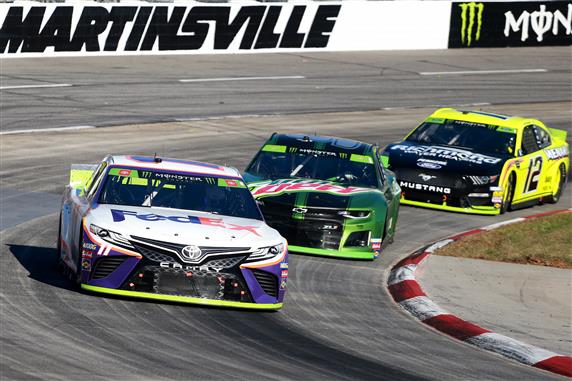 The Cup Series will be back to mid-week racing and this time it will be at Martinsville Speedway. If any drivers have any scores to settle, this is the track to do it at. There will be some hot-tempered drivers after the race for sure. I just hope none of my drivers are involved. It should be a fun race to watch. The Blue-Emu Maximum Pain Relief 500 can be seen Wednesday at 7 p.m. ET on FS1.

Kyle Busch: Could this be the coming out party for Kyle Busch in 2020? I think so. He is the safest pick in the field Wednesday night. Let me explain the results from Busch in this aero-package:.. 4th, 2nd, 1st, 1st, 2nd, 5th, 1st and 5th. Looks pretty good to me! If that doesn’t have you selecting Busch for your lineup, maybe his average of 133 laps led in those races will. I know Busch has looked rusty at times this season, but he should put it all together in this race.

Brad Keselowski: Brad Keselowski absolutely dominated the spring race at Martinsville. The No. 2 car started 3rd and immediately went to the front. Keselowski won both Stages, led 446 of the 500 laps and went to Victory Lane. He has a 3rd-place average finishing position in the last 8 races at Martinsville… Outstanding! Keselowski also won the last race on a short track (Bristol). He should battle Kyle Busch for the win Wednesday night.

Clint Bowyer: If you ever plan to use Clint Bowyer in your starting lineup it needs to be at Martinsville. He is a crazy driver so it is only natural that a paper-clip shaped track would be his best. Bowyer finished 4 of his 6 races for Stewart-Haas Racing in the top 7 at Martinsville. It should have been 5 of 6 but a pit road mistake sent him to the back of the field in the last race at Martinsville (Bowyer was running 6th at the time). Bowyer finished 2nd in the last short track (Bristol). He should finish in the top 10 Wednesday.

Ryan Blaney: If you are not worried about allocations, Ryan Blaney should be in your starting lineup Wednesday. He is by far the best pick in Group C. Blaney finished 4th and 5th in the 2 races at Martinsville last year. He also led 145 laps, scored 17 Stage points and finished 3rd in 2018. I will watch to see where he starts before I decide to use an allocation with the No. 12 car.

Jimmie Johnson: I was really hoping Jimmie Johnson would have broke into the top 12 in the Owner’s Points Standings so he could have drew for one of the top 12 starting spots. I will be keeping an eye on where he starts the race Wednesday. I would really like to use the nine time race winner at Martinsville but not if he starts outside the top 20. Track position is too important at this track.

Aric Almirola: Stewart-Haas Racing only has two wins at Martinsville (Tony Stewart in 2011 and Clint Bowyer in 2018) but their cars consistently run up front. Aric Almirola finished 3 of his 4 races at Martinsville in a SHR car in the top 14. It should have been a solid 4 for 4 but he was dumped by Kyle Busch while racing for the 5th position last October. This is one of the best tracks to use an allocation with Almirola.

Matt Kenseth: Matt Kenseth “should” be the best pick in Group C but he has not been very good since his return. Most of the other drivers in Group C have very limited experience at Martinsville and it is going to be tough on them without practice or qualifying. I want a driver with some experience at Martinsville and few in the field have been better than Kenseth. I plan to use another allocation with Kenseth Wednesday night.

Bubba Wallace: I was planning on using Bubba Wallace in this race because Martinsville is one of his best tracks but he did not look good after the race at Atlanta. He also does not have much time to recover. Wallace finished 13th and 17th in the 2 races at Martinsville last year. Wallace also finished 10th and 19th in the 2 races using this aero-package last year. I will monitor his health before I decide to use Wallace in my lineup.