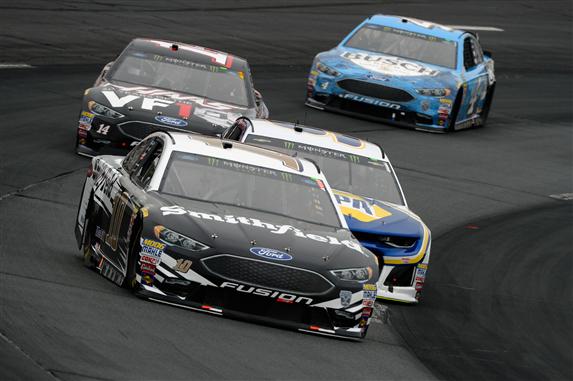 The NASCAR Cup Series will travel to New Hampshire Motor Speedway this week. This race often involves a driver running in second-place dumping the race leader to get to Victory Lane. I love the short, flat, tracks and I wish there were more of them on the schedule. I expect another fun finish at the Magic Mile. The Foxwoods Resorts Casino 301 can be seen Sunday at 3 p.m. ET on NBCSN.

New Hampshire is a flat, 1-mile track. Most of the drivers say it races like a large Martinsville. The Cup Series will have the 750 HP aero package this week. That means the spoiler will be reduced from 8” to 2.75” and the splitter will be reduced from 2” to .25”. The cars will be the same as what they had at Phoenix in March and at similar to New Hampshire in 2018. We can also use info from the race at the Magic Mile in 2019.

Here are my picks for the Foxwoods Resorts Casino 301 …

(Start) Denny Hamlin: There is no doubt that Denny Hamlin has been the best driver for Joe Gibbs Racing this season. He has a series-high five trips to Victory Lane. New Hampshire is one of the best tracks for JGR so I would not be surprised to see Hamlin add win No. 6 to his 2020 resume Sunday. Hamlin finished second at the Magic Mile last year. Do not be afraid to use an allocation with Hamlin at the Magic Mile.

(Bench) Kevin Harvick: It will be tough to fade a driver who has won back-to-back races at New Hampshire and has been one of the best drivers in 2020. Kevin Harvick has been awesome at the Magic Mile since he joined Stewart-Haas Racing. The No. 4 car finished seven of the 10 races in the top five. That includes trips to Victory Lane in 2019, 2018 and 2016. I only have three allocations left with Harvick and I have three tracks I am saving him for, so the No. 4 car will be on the bench this week.

(Start) Ryan Blaney: Once again Ryan Blaney is the best choice for Group B. He has finished 4th, 7th and 9th in his last three races at the Magic Mile. Some of the drivers have said that New Hampshire races like a large Martinsville. If that is true, Blaney will be very good Sunday. The No. 12 car finished 2nd at Martinsville and had one of the best cars in the field. Blaney will have a good chance to finish in the top five Sunday.

(Start) Matt DiBenedetto: Matt DiBenedetto said after his wreck last week, “This sucks. Our luck needs to turn around sooner or later. The good news is that we head to my favorite track next week (New Hampshire).” DiBenedetto had an awesome race for Leavine Family Racing at the Magic Mile last year. He qualified 7th and finished 5th. DiBenedetto should be even better in his Wood Brothers Ford.

(Bench) Alex Bowman: I like Alex Bowman more for the larger tracks but he should be a good pick Sunday. Bowman has the ninth-best Driver Rating and the sixth-best average finishing position on the short tracks this year. He has never finished in the top 10 at New Hampshire but his average finishing position at the Magic Mile is 13th over the last three seasons. Not too bad.

(Start if you can) Aric Almirola: I am out of allocations with Aric Almirola. If you have any starts left with the No. 10 car, you need to pair Almirola with Ryan Blaney or Matt DiBenedetto. He is on quite the roll right now. Almirola has finished eight races in a row in the top 10. He also finished 11/16 races in the top-10 this season. There is no guarantee that Almirola will stay this hot all year, so you should play him while he is scoring top-10 finishes.

(Allocation Special) Ryan Newman: Ryan Newman is always a good pick on short, flat tracks. His best tracks include: 1. Daytona, 2. Phoenix, 3. New Hampshire and 4. Richmond. Three of his top-four tracks are short, flat tracks. Newman finished seventh at the Magic Mile last year and sixth in 2018. I would not be surprised if he finishes in the top 10 again this week.

(Start) Christopher Bell: New Hampshire ranked as the best track for Christopher Bell in the Xfinity Series. He has two starts at the Magic Mile and he won both of them. He also finished first and second in his two races in the Truck Series at the track. So in his four races in the National Series at New Hampshire, Bell won three of them and finished second in the other. It is hard to get any better than that. Bell will be driving the car that Matt DiBenedetto finished fifth at the Magic Mile with last year. This is a good race to use Bell.

(Bench) Matt Kenseth: It has been hard to trust Matt Kenseth this season but if he is ever going to get back to Victory Lane, it should happen Sunday. New Hampshire ranks as the best track for Kenseth. He has finished 4th, 4th and 16th in his last three races at the Magic Mile. His 7.3 average finishing position in the last four races at the track are the fourth-best in the series. He also has the fifth-best driver ranking at New Hampshire. This “should” be a good week to go back to Kenseth in Group C.