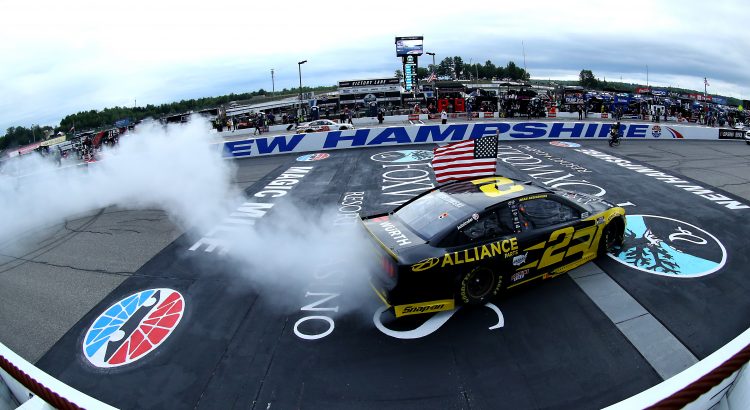 The schedule has been crazy this year with all of the road course races and the Tricky Triangles. Finally we get a race on a good old short track. Some people have been advocating for more road course races, but my favorite tracks are the 1-mile ovals. I think they put on a great show. The Foxwoods Resort Casino 301 can be seen Sunday at 3:30 p.m. ET on NBCSN.

Stacking the Busch Brothers worked out well last week. Denny Hamlin did not help the lineup because he once again was caught speeding on pit road and fell back through the field. That is just the risk you take when you play Hamlin in your lineup. Ross Chastain did not live up to expectations but if we were to receive points for being a good teammate, Chastain would have been the highest scoring driver in the game. Chastain blocked Kyle Busch to help Kurt Busch get to Victory Lane. The move did not help us much, but Kurt is sure happy about it. Overall it was not a bad race at Atlanta.

Here is my starting lineup for the Foxwoods Resort Casino 301…

Denny Hamlin (4): Denny Hamlin has not been to Victory Lane yet this season but I expect his winless streak to come to an end Sunday. Hamlin finished 2nd in his last two races at the Magic Mile. He has also averaged 102 laps led per race and 7 Stage points in 2019 and 2020 at the Magic Mile. Hamlin has also been good on the short, flat tracks this year. He finished 3rd at Phoenix, 3rd at Martinsville and 2nd at Richmond. He also averaged 183 laps led in those races. Hamlin should easily finish in the top-five Sunday.

Allocation Saver is Martin Truex Jr. (5): I really like the speed that Joe Gibbs Racing showed last week. They have been the best team on the short, flat tracks this season so if you do not trust Denny Hamlin, you need to use Martin Truex Jr. The No. 19 car won at Phoenix and Martinsville and he finished 5th at Richmond. Truex will be a great pick from the front row.

Christopher Bell (5): You cannot have too many Joe Gibbs Racing cars in your lineup Sunday. New Hampshire is not a good track for Kyle Busch so I will go with Christopher Bell. Just like his teammates; Bell has been good on the short flat tracks this season. Bell finished 9th at Phoenix, 7th at Martinsville and 4th at Richmond this season. He should finish in the top-10 again Sunday from the 9th position.

Alex Bowman (4): Richmond is similar to New Hampshire so why not play the driver who won the race at Richmond? Alex Bowman started 24th in that race and was able to find Victory Lane. Bowman won the last two short tracks races (Dover and Richmond) so I will take a chance with the No. 48 car again Sunday.

Allocation Saver Aric Almirola (6): Do you trust Aric Almirola? If the answer is yes, you need to play the No. 10 car at New Hampshire. The Magic Mile ranks as his best track. Almirola has a 7th-place average finishing position in the current aero package at the Magic Mile. He has also had success this year on the short, flat tracks. Almirola finished 11th at Phoenix and 6th at Richmond. He will have a decent chance to finish in the top-10 Sunday.

Bubba Wallace (8): Three things scare me to death…. Snakes, spiders and playing Bubba Wallace in Fantasy NASCAR. I believe that the Toyota’s are going to bring a lot of speed to the track this week so Wallace should have what he needs to finish in the top-15. The No. 23 car has been “OK” lately. Wallace finished 14th last week at Atlanta, 5th at Pocono race 2 and 14th at Pocono race 1. Wallace finished 16th at Phoenix and that is the track most similar to New Hampshire. I will close my eyes and click on Bubba’s name this week.

Allocation Saver Daniel Suarez (6): Daniel Suarez was the driver I was planning to use in Group C at the Magic Mile. Suarez has been pretty fast this year and he has a pair of top-10 finishes at New Hampshire. Suarez wrecked early in the race last week. Now he starts 31st. I am not sure he can get to the front in Stage 1 and 2 so I am going to fade the No. 99 car Sunday. If you are feeling lucky, take a chance with Suarez. He just may pay off this week.

** It should be a battle between Denny Hamlin and Martin Truex Jr. Sunday so I will pick Hamlin to win and Truex for the Top Toyota. That will give me bonus points if either driver finds Victory Lane Sunday.