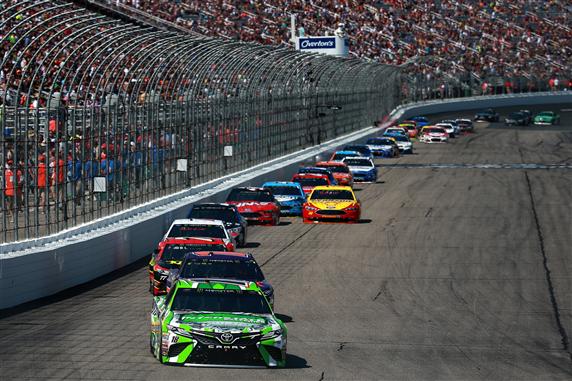 The Monster Energy NASCAR Cup Series will compete at New Hampshire Motor Speedway this week in the Foxwoods 301. This will be the 20th race of the season and there are only seven races left until the playoffs begin. I expect the teams who have not secured their spot to really race hard at the Magic Mile. The race can be seen Sunday at 2 p.m. ET on NBC Sports Network.

The MENCS will have their traditional schedule (the one I like the most) this week. There will be one practice Friday at 12 pm ET (Usually to test qualifying setups), followed by qualifying Friday night at 4:45 pm ET. The drivers will return to the track Saturday morning for two more practices to dial their cars in for the Foxwoods 301. Since we know all the cars will be in race-trim Saturday, I should be able to provide very accurate picks for this race. Our Driver Group Game Lineups need to be set by 8 am ET Friday morning.

The last race at Kentucky was dominated by two drivers. Kyle Busch won the pole and led 187 laps on his way to Victory Lane. Martin Truex Jr. took the lead from Busch and won Stage 1. Truex ended up leading 112 laps but was collected in an accident when Kevin Harvick spun out on lap 148. Busch and Truex were able to lead 300 of 301 laps in the race (Kyle Larson led the other lap). I expect the same two drivers to compete for the win Sunday afternoon.

NASCAR decided take away one of the dates from New Hampshire. While I understand their reasoning for their decision, I wish we could keep as many of our short tracks as possible on the schedule. The Magic Mile has long, sweeping corners and fast straightaway’s. The name of the game at this track is TIRES!! The driver who can manage his tires the best throughout a long run will be upfront Sunday. Some drivers are just better than others so expect the same drives who performed well at New Hampshire in the past to be the drivers to beat this week.

Kyle Busch (5): Busch dominated the races at New Hampshire last year. He led 95 laps in the summer race and 187 laps in the fall on his way to Victory Lane. Busch has a series-high 125.7 driver ranking and has led the most laps at the Magic Mile (513) in the last four races at the track. Busch will also be a threat to score bonus points for winning the pole. He won the pole for the last race at New Hampshire and he has three poles on his 2018 resume. I am not afraid to burn another allocation with Busch this week.

Martin Truex Jr. (6): Truex is my pick to win this week. He has more momentum than any driver in the sport. Truex has finished 1st, 2nd, 4th, 18th, 1st, 2nd and 2nd in his last seven races. He might be better now than he was in 2017. Truex took the lead at New Hampshire from Kyle Busch last year and he was on his way to winning the race before he was collected in an accident. Truex finished both races at the Monster Mile in the top five last year and led 249 laps. The No. 78 car has led at least 112 laps in every race at New Hampshire since 2015. I still have 6 allocations with Truex and pairing him with Busch almost guarantees me the pole and a top 3 finish from my Group A driver this week.

Erik Jones (6): Jones is on a hot streak right now and I am going to play him until he cools off. Jones has finished his last four races in the top seven. He ran well in his last race at the Magic Mile. Jones qualified 8th, had a 6th-place average running position and finished 6th. He is running better now than he was last year so I would not be surprised to see Jones finish in the top 5 Sunday afternoon.

Daniel Suarez (9): Toyota (mainly Joe Gibbs Racing and Furniture Row Racing) has made the Magic Mile their personal playground. Joe Gibbs Racing has won five of the last six races at the track and the Toyota drivers have led 1,168 laps in the last four races at the Magic Mile. Suarez might be the weakest link on the Toyota team, but that does not mean he is not a good pick for your team. Suarez finished 6th and 8th in his two races at New Hampshire last year. The No. 19 car ran well last week at Kentucky and I expect it to be in the top 10 this week at the Magic Mile.

Clint Bowyer (2): Bowyer may be the best driver behind the Big Three (Kyle Busch, Kevin Harvick and Martin Truex Jr.) I said I plan to use him until he cools off or I run out of allocations and I was not joking. New Hampshire was the best track for Bowyer in his first season with Stewart-Haas Racing. He finished both races in the 7th position. I am hoping I can make it through this race without using Bowyer in my starting lineup, but he is a good insurance policy to have on my team this week.

* We must decide if we want to play it safe or swing for the fences with our last spot in Group B. Matt Kenseth is the best pick in the field on paper but he is not in a Joe Gibbs Racing car anymore. Chase Elliott runs well at this track and is almost a lock for a top-12 finish. I am going to play it safe this week and use Elliott. If you are deep in your standings and want to try and hit a Home Run, take a swing with Kenseth at New Hampshire.

Matt Kenseth (9): This is a week when I really wish we could see one practice before we are required to lock down our lineups. I would love to see what kind of speed Kenseth posts before selecting him for my team. New Hampshire is by far the best track for Kenseth. In his last eight races at the Magic Mile, Kenseth has finished 3rd, 4th, 2nd, 1st, 1st, 6th, 21st (ran out fuel), 4th and 1st. Is he good enough at this track to take a piece of junk car and finish in the top 10? I am not sure, but I think he will easily finish in the top 15.

Chase Elliott (5): Elliott needs points if he is going to make the playoffs. I expect this team will play it safe and use the strategy to keep Elliott in the top 12. Elliott has run very well on the flat tracks this season. He finished 3rd at Phoenix, 9th at Martinsville and 2nd at Richmond. He has also led laps in each of these races (81 in total). We are still waiting for the No. 9 car to come to life. I have a gut feeling this is a race where Elliott will run well.

Alex Bowman (4): I am sure glad I did not use Bowman last week. I thought about it, but I had a gut feeling it was not going to be his race. I expect a lot more out of the No. 88 car this week. It is no secret that Bowman is good on the flat tracks. He always runs well at Phoenix and he finished 14th in his only race at New Hampshire in the No. 88 car. I expect the No. 88 team to play it safe this week since they are on the cut line of making the playoffs. The team will use whatever strategy they need to ensure Bowman finishes in the top 15.

William Byron (4): Byron will be my 2nd pick for Group C this week. I like what I have seen from Byron at the flat tracks this season. He finished 12th at Phoenix, 20th at Martinsville (a tough track for a rookie) and 12th at Richmond. Byron has never competed in a MENCS race at New Hampshire but he has a 3rd-place finish in the Xfinity Series and a win in the Camping World Truck Series on his resume. I feel very comfortable using an allocation with Byron this week.