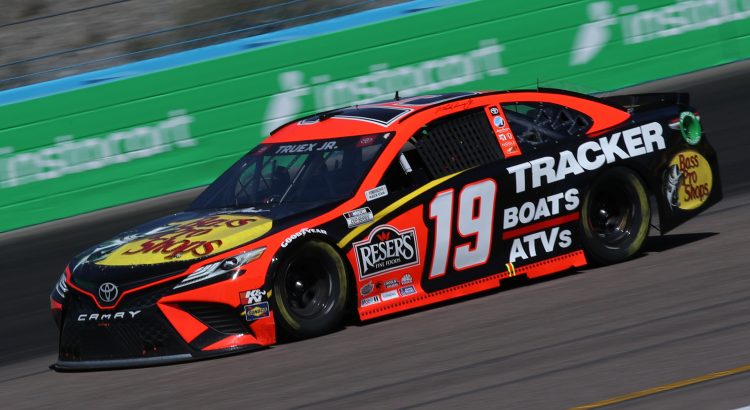 The NASCAR Cup Series will complete their “West Coast Swing” this week when they travel to Phoenix Raceway. You buckle your seatbelt on your couch because it is about to get crazy in the desert. The Gen-7 car has caused cautions to double at Auto Club and Las Vegas. Phoenix Raceway averages nine cautions per race so we may be in for a long race Sunday. I am not so sure that cutting the dogleg in a car that has been bottoming out all season is a good idea. Well, it should be fun to watch at least.

The lineup last week was only “OK”. I was hoping to get more Stage Points and the bonus points for leading the most laps from Kyle Larson but it is hard to be upset from a second-place finish. William Byron also had a solid day with his fifth-place finish. The two Team Penske cars sank the lineup with Joey Logano’s 14th-place finish and Austin Cindric’s 19th-place finish. The lineup scored 324 points. It is time to pick it up and start dominating these races.

I would love to use Kyle Larson this week, but we cannot use him in every race. I will play two other drivers in Group A who have run well at Phoenix and have had a lot of speed this year.

Group B does not have as many good choices as what we usually have at Phoenix. Do we use our top drivers (Joey Logano, William Byron, Tyler Reddick and Kurt Busch) or do we take a chance with some drivers who ran well at Busch Light Clash Race and ran well this season (Austin Dillon and Ricky Stenhouse Jr.)? I mapped out the allocations for each race, so I have a good idea who to get through the season without running out of drivers. I will use my top choices this week.

There are a lot of good choices in Group B. Erik Jones and Austin Cindric looked fast this year and has a history of running well at Phoenix. Justin Haley, AJ Allmendinger and Cole Custer looked good at the L.A. Coliseum. Will that speed translate into success at Phoenix? If I had to choose one of these drivers, I would go with Allmendinger. I trust him the most.

KYLE BUSCH (8): I like playing a highly motivated (or pissed off) Busch. He knows he had the race won last week in a backup car and now he will be ready to dominate Sunday. Rowdy finished seven of the last 11 races at Phoenix in the top-three. His average finishing position at Phoenix since 2014 is 5.2. The No. 18 car was one of the fastest at the short, flat track at the Coliseum and he was the fastest last week too. Rowdy is my pick to win right now.

MARTIN TRUEX JR. (9): Truex has been the master of the short, flat tracks over the last two years. Truex has wins at Martinsville and Richmond and he finished first and second in the two races at Phoenix last year. The No. 19 car had a lot of speed last week at Las Vegas. There is no reason to believe the car will not be fast at Phoenix. It is risky to select two drivers from Joe Gibbs Racing for Group A, but I trust that they will hit the setup this week.

JOEY LOGANO (8): It is really hard to go back to a driver after he had a bad performance, but I am going to do it with Logano. He has a fifth-place average finishing position in his last five races at Phoenix. Logano was awesome on the flat track at the Coliseum and Team Penske has shown good speed this year. Logano should run up front, score a lot of Stage Points and compete for the win Sunday.

ARIC ALMIROLA (9): OK Mr. Consistent… I will take a chance with you. Almirola is the only driver who has finished every race in the top-10 this year. Now he gets to race at one of his best tracks. Almirola is a short, flat track specialist. He won the race at New Hampshire last year and his average finishing position since 2016 at Phoenix is ninth. I will roll the dice with Almirola Sunday and see if his hot streak can continue.

CHRISTOPHER BELL (9): Bell looked good last week. Now we get to see if he can make it two good races in a row. I think he can. Bell finished ninth in both races at Phoenix last year. Joe Gibbs Racing was trying different setups at Auto Club, but it looked like they got their cars dialed in last week at Las Vegas. I expect Bell to run in the top-10 again this week.

WILLIAM BYRON (8): I really do not want to use another allocation with Byron but he is clearly the second best choice in Group B behind Joey Logano. Byron has had a lot of speed this year. He had the fifth-best average green flag speed at the short, flat track at the L.A. Coliseum. He also had a top-five car last week. Byron finished three of the last four races at Phoenix in the top-10, so he checks all of the boxes this week. My plan is to only use Byron for qualifying points, but I will use him in the race if he dominates practice and qualifies up front.

ERIK JONES (9): Jones is off to a hot start to the season. He was one of the fastest drivers on the short, flat track at the L.A. Coliseum and he has been fast in the last two races too. Jones was really good at Phoenix early in his Cup Series career but he was not very good in the last four races. Petty GMS Motorsports seems to have the Gen-7 car dialed in pretty well, so I will take a chance with Jones.

AUSTIN CINDRIC (7): Phoenix Raceway was one of the best tracks for Cindric. He finished 2nd, 1st, 1st, 8th, 6th, 5th and 4th in his seven Xfinity Series races at the track. So can that success translate into the Cup Series? I doubt he will run in the top-five but he should be able to qualify up front and finish in the top-12. He has been pretty good at doing that this year.