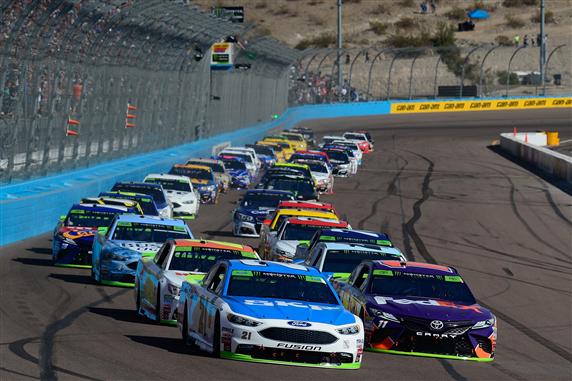 Only two races are left in the MENCS season. If you have a lot of allocations left with the playoff drivers, you have been playing the game wrong. Finding drivers for the final two races can be difficult but it is not impossible. I plan to keep the pedal to the medal and try to score over 300 points in the final two races.  The race can be seen Sunday at 2:30pm ET on NBC.

The two best choices for Group A are Kevin Harvick and Kyle Busch. If you have one allocation left with Harvick, I would use it this week. The No. 4 team looks like they are ready to dominate the race Sunday. I would use either the No. 4 or No. 18 cars over my pick this week. (I you only have one allocations left with either the 4 or 18, use it this week because their no guarantee they will be competing for the championship next week.

Martin Truex Jr. (3): Truex needs a good race at Phoenix in order to secure his spot in the championship race at Homestead. Truex used to struggle at Phoenix but he seemed to have figured something out last year. The No. 78 car has finished 3rd and 5th in the last two races at the track. The No. 78 car qualified 13th but he was 5th fastest in practice. I will roll the dice with Truex Sunday.

Chase Elliott (2): Elliott needs Stage points and probably a top 3 finish Sunday. He has the ability to do both. Elliott has finished 2nd and 3rd in his last two races at Phoenix and he qualified 2nd for the race this week. Phoenix is one of the best tracks for Hendrick Motorsports. Elliott almost won this race last year. He should be a serious threat to Kevin Harvick Sunday.

Eric Jones (2): Jones has competed in 3 MENCS races at Phoenix and he has never finished outside the top 10. Joe Gibbs Racing usually performs well at ISM Raceway. Jones qualified 7th and posted the 4th fastest lap in final practice. Jones will be driving the car the won this race last year. He should add another top-10 finish to his 2018 resume this week.

Alex Bowman (1): This is one of the best tracks for Bowman. He drove the No. 88 car for Dale Earnhardt Jr. at Phoenix in 2016. Bowman won the pole, led 194 laps and finished 6th. The No. 88 team showed up with a lot of speed again this week. Bowman qualified 5th and should be fast enough to finish in the top 10. If you have any allocations left with Bowman, use it them week.