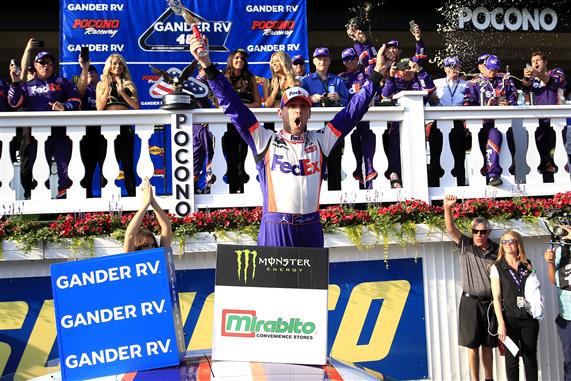 NASCAR will have a double-header of racing at Pocono this weekend. The first Cup Series race is Saturday at 3 p.m. ET and the second race is Sunday at 3:30 p.m. (Both races on NBCSN). The picks in this article are for the Saturday race. The pick for the Sunday race will be posted no later than Sunday morning.

Denny Hamlin (7): We need to decide between Denny Hamlin and Kevin Harvick for our Group A pick this week. These two drivers finished 1st and 2nd in both races at Pocono last year. I decided to go with Hamlin for my Group A driver. I trust the No. 11 team over the No. 4 team right now. Hamlin has 6 wins at Pocono and a 1.3 average finishing position in his last three races at the Tricky Triangle. Hamlin should be a lock for a top-five finish.

Other Good pick is Kevin Harvick (7): If you are not going to use Denny Hamlin, you should use Kevin Harvick. The No. 4 car has finished 7 of the last 9 races at the Tricky Triangle in the top 4. Harvick leads the Cup Series with a 123.2 Driver Rating in the last 6 races at Pocono. Harvick should have a good chance to finish in the top-five Saturday.

There is no doubt that Kyle Larson, Kyle Busch and William Byron are the three best picks for Group B at Pocono but I am going to fade these three drivers at the Tricky Triangle, the road courses and the Superspeedways. I think their advantage over the field is greater at the shorter tracks. You can use any of these drivers if you have 5 or more allocations left with them.

Christopher Bell (6): Christopher Bell will be one of my Group B drivers this week. He started 36th and finished 4th at Pocono last year and that was in a Leavin Family Racing car. He came back the next day and was running 11th when he had a flat tire. Bell should be much better in the No. 20 car for Joe Gibbs Racing. Erik Jones finished 3rd, 38th (flat tire), 2nd, 3rd and 5th in the No. 20 car at Pocono. I think Bell can have similar results.

Aric Almirola (7): I will be honest… Picking Aric Almirola this week scares me because this team seems to be cursed this season. The No. 10 team is showing improvements though. Almirola won a round of the All-Star Open and he finished 4th at Nashville. Now he gets to race at one of his best tracks. Almirola finished 3rd and 5th in the two races at Pocono last year and he led the most laps in the first race. Denny Hamlin, Kevin Harvick and Almrila were the only two drivers to finish both races in the top-five. Almirola should be able to finish in the top-10 this week.

Ross Chastain (6): I am going to play the hot hand and use Ross Chastain again Saturday. Chastain had his best career finish in the Cup Series last week when he finished 2nd at Nashville. Now Chastain will start 6th Saturday. He had a lot of success at the Tricky Triangle in the Xfinity Series (Chastain finished 2nd last year at Pocono) and I am expecting a top-12 finish from the No. 42 team in the first race at Pocono.

Other Good Pick is Ricky Stenhouse Jr. (4): If you are not going to use Ross Chastain, Ricky Stenhouse Jr. needs to be your driver. The No. 47 team is on a roll after finishes of 12th at Charlotte and 6th at Nashville. The draft will come into play this week and we all know how good Stenhouse is on the Superspeedways. I would use Stenhouse over Chastain but I only have 4 allocations with him. There are four other races I want to use Stenhouse so I will pivot to Ross Chastain. Stenhouse is probably the safer pick, but both drivers have a good chance to run well Saturday.