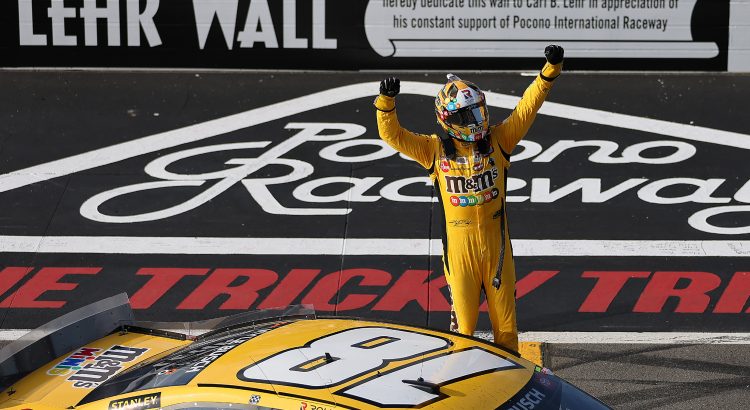 The NASCAR Cup Series travels to the Honeymoon Capitol of the World to compete at Pocono Raceway this week. The Cup Series is starting to get wild. There have been 14 drivers who have found Victory Lane and that means there are only two spots remaining for drivers without a win. That is “IF” the Cup Series does not have any more new drivers in the final six races. I would not be surprised if we had another new winner this week. It is going to be a wild race to the playoffs and it continues Sunday at 3 p.m. ET on USA Network.

How do we pick our drivers for a track that the Gen-7 car has never competed at and there are no other tracks to compare the Tricky Triangle too? The races at Pocono usually are won or lost on pit strategy so that just complicates the picks even more. So do we use our top drivers this week or save them for more predictable tracks? I really wish we could see practice this week before we set our lineups, but that is not the case. Lineup lock is at 8 a.m. ET Saturday so we will not get to see the cars on the track.

My strategy this week is to focus the picks on momentum. I want the drivers who are running well now in my lineup. I used track history at Pocono as a tie-breaker if I had two drivers who were close in momentum. I will then lean on practice speeds and qualifying positions for the final picks Sunday. (Kyle Busch is the exception. He has no momentum, but he is too good at this track to fade).

CHASE ELLIOTT (5): Pocono is not a good track for Elliott so I would understand if you want to fade him this week. New Hampshire was one of Elliott’s worst tracks and he nearly won the race. The No. 9 team is the best in the Cup Series right now. Elliott finished 1st, 2nd, 1st and 2nd in his last four races. He could easily have a four race win streak going into the races at Pocono but mistakes at the end of the races at Road America and New Hampshire caused Elliott two more wins. He is running too well right now to fade, so I will have the No. 9 car in my lineup. (Make sure you have at least four allocations with Elliott because you are going to need him at the Indy Road Course, Watkins Glen and the Charlotte Roval. If you do not have at least four allocations with Elliott, replace him with Denny Hamlin.)

KYLE BUSCH (5): Do I trust Kyle Busch right now? Hell no! But I also do not trust Denny Hamlin or Ryan Blaney right now as well. The pick this week should be Martin Truex Jr. or Kevin Harvick if I go off of recent momentum, but this is bad track for Truex and I do not trust Harvick to score any qualifying points or a lot of Stage Points this week (The No. 4 team will likely sacrifice Stage Points to start up front in the final Stage). I will roll the dice with Rowdy. He finished 1st, 2nd, 38th, 5th, 9th, 1st, 1st, 3rd and 1st in his last nine races at the Tricky Triangle (He was running 2nd in 2020 when he wrecked and finished 38th). Busch has been at his best at the large tracks this year. He finished 4th at Las Vegas, 3rd at Kansas and 2nd at Charlotte. The No. 18 car is going to have speed. I just need Busch not to screw it up.

CHRISTOPHER BELL (3): I am taking a risk this week by focusing my picks on what has happened this year and ignoring past history at Pocono. The Tricky Triangle is a shitty track for Bell but he has been on fire this year. Bell finished 1st, 8th, 9th, 5th, 6th, 4th and 7th in his last seven non-Super Speedway and non-Road Course races. No driver in the series has been more consistent as Bell. Crew Chief Adam Stevens has won three of the last seven races at Pocono. I will play the hot hand and use Bell this week.

ROSS CHASTAIN (4): There are a few things we know about Chastain Sunday. We know he is going to have one of the fastest cars in the race. The No. 1 car has had the most consistent speed this year. We also know he will not going to get wrecked. The speeds are too high at Pocono for a driver to purposely send Chastain into the wall. His stats at Pocono suck, but he is different driver this year. Chastain is running too well this year to not have him in your lineup at least for qualifying points.

KURT BUSCH (6): Busch said before last week’s race, “We have a win in the bank so we just need to ensure we score as many points as possible, just in case there are more than 16 winners before the playoffs begin.” The No. 45 team used strategy to finish in the top-10 in Stages 1 and 2, led 40 laps and finish in the top-10 last week. I expect the No. 45 team will use a similar strategy Sunday and be a great choice for your Driver Group Game lineup. Busch scored 14 Stage Points, led 12 laps and finished 6th in this race last year at Pocono. I will take a similar race from Busch this week.

BUBBA WALLACE (7): I know this is not going to be a popular pick but I need to save some allocations so I will take a chance with Wallace. If you refuse to use Wallace and want to play it safe, use Joey Logano or William Byron this week. Wallace was actually good at Pocono last year. He finished 14th in the first race and 5th in the second race. Wallace will have some momentum after his 3rd-place finish last week. I am not sure Wallace will make my starting lineup, but I like having him in the lineup just in case he qualified in the top-five like he did last week.

DANIEL SUAREZ (4): Suarez is another driver who is on a hot streak right now. Suarez has finished 9th, 6th, 5th, 15th and 1st in his last five races. The No. 99 car has had speed all season, but Suarez had a problem running a complete race and finishing up front. He seems to have overcome his problems and now Suarez is consistently finishing in the top-10. Suarez nearly won the race at Pocono in 2018 (the last time the race was 160 laps). I will take a chance with my Amigo Sunday.

AUSTIN CINDRIC (3): Austin Cindric won the Xfinity Series at Pocono last year. Now we get to see what he can do in the Cup Series car. Most of the drivers say that the Tricky Triangle races like a road course. That explains why Cindric has been good at this track. The No. 2 car was always one of the best at Pocono with Brad Keselowski behind the wheel. The car should have speed in qualifying and Cindric should have the talent to keep it up front.

I only have one start left with Zane Smith. I am going to save it for one of the more predictable tracks in the playoffs. I will use Carson Hocevar instead. He has been pretty good lately.