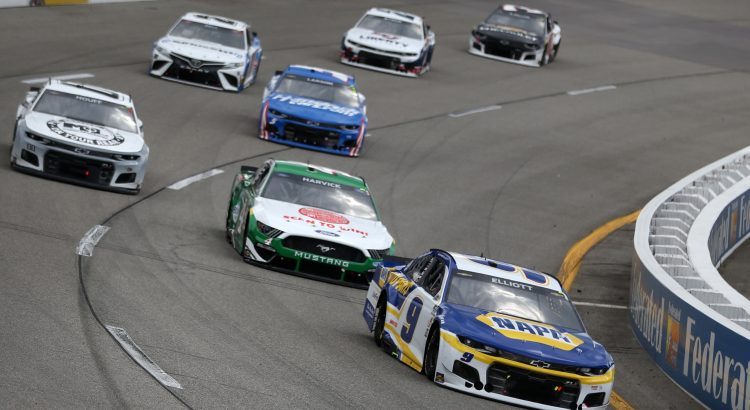 The Cup Series will travel back to Richmond Raceway this week for the second race in the 2021 playoffs. Many of the drivers competing for the championship dug themselves a hole at Darlington and now they must fight their way through a Saturday night short-track race in order to avoid a “must win situation” at Bristol next week. The Federated Auto Parts Salute to American Heroes 400 can be seen Saturday evening at 7:30 p.m. ET on NBCSN.

Here is my starting lineup for Richmond…

Denny Hamlin (1): I have one allocation left with Denny Hamlin and I am going to use it Saturday night. I probably should have used it last week at Darlington but hindsight is 20/20. Hamlin should be just as good this week. Hamlin started 2nd, won both Stages, led 207 laps and finished 2nd at Richmond in April. He has the best average finishing position and driver rating on the oval tracks where the 750 HP aero package has been used this year. I expect Hamlin to make a statement at his home track by starting the 2021 playoffs with back-to-back wins.

Allocation Saver is Joey Logano (7): Joey Logano was almost as good as Hamlin at Richmond in April. The No. 22 car started 5th, finished 3rd in both Stages, led 49 laps and finished 3rd. Logano has been the second-best driver (behind Denny Hamlin) in the oval races where the 750 HP aero package has been used this year. Logano has finished his last two races at Richmond in 3rd place and he is averaging 15.5 Stage points per race. Logano is a good pivot from Hamlin if you want to save Hamlin for another race.

Kyle Larson has been a beast this season but this could be a race where you give the No. 5 car some rest and leave Larson on the bench. He finished 18th at Richmond in April and was never a threat to win. His average finishing position at Richmond in his last three races is 20th. I still think Larson will finish in the top-10, but there are better tracks to use your last allocations with Larson.

Alex Bowman (4): I am a big believer in momentum in NASCAR but this week I am going against my beliefs. Alex Bowman was a disaster last week at Darlington. He should have some confidence heading into the race Saturday night. Bowman won the race at Richmond in April. His car did not start off the race as the fastest but the team kept working on it and the No. 48 was blazing fast at the end of the race. I expect the team to have a better setup to start the race this week and finish in the top-10 again at Richmond.

Christopher Bell (2): I only have two allocations left with Christopher Bell and I will use one of them Saturday night. You cannot have too many drivers from Joe Gibbs Racing in your lineup this week. JGR has dominated the races at Richmond over the last two seasons. I expect the same this week. Bell started 8th, finished 6th in Stage 1, finished 9th in Stage 2 and finished 4th in the April race at Richmond. This is one of the best tracks for Bell so I expect another top-10 finish from the No. 20 car Saturday night.

Other Choices: Kyle Busch (2): Kyle Busch wrecked at Darlington and now he is below the cut-line for advancing to the next round of the playoffs. Pouty Bush needs a good race and he will probably get it. He has finished 7 consecutive races at Richmond in the top-10 with back-to-back wins in 2018. I am saving Busch for Bristol and either Las Vegas or Kansas. If you have 3 or more allocations with Busch, use him over Alex Bowman.

Allocation Saver: Aric Almirola (6): Are you feeling lucky this week? If so, take a chance with Aric Almirola. He has been really good in the 750 HP aero package and he has had some success at Richmond too. Almirola won the last race on a short, flat track at New Hampshire. He also finished 6th at Richmond in April. Almirola should have a good chance to finish in the top-10 again Saturday night.

Ross Chastain (2): Ross Chastain was awesome last week. Now, can he do it again? I only have 2 allocations left with Chastain and I want to use them at the tracks were the 750 HP aero package is used. Chip Ganassi Racing has this package figured out. Chastain started 18th and finished 15th at Richmond in April. The No. 42 team is running a lot better now than they were in the spring. Chastain finished 8th at New Hampshire in July. I expect another top-10 finish from Chastain Saturday night.

Other Good Option: Ricky Stenhouse Jr. (3): Ricky Stenhouse Jr. is the next best option behind Ross Chastain. The No. 47 car has been decent in the oval races where the 750 HP aero package has been used this year. Stenhouse finished 12th at Phoenix, 17th at Richmond, 6th at Nashville, 15th at New Hampshire and 17th last week at Darlington. He should finish around the 15th position Saturday night.