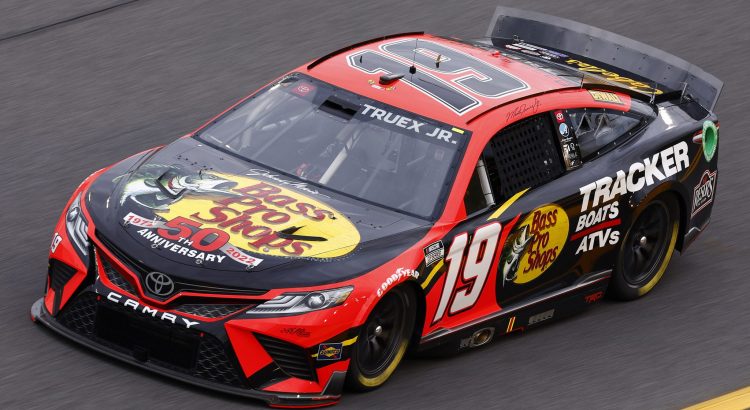 The NASCAR Cup Series made it through their first road course race and now it is time for the short-track portion of the schedule. The next three races will be on short-tracks (Richmond, Martinsville and Bristol). This is my favorite part of the schedule. The race should be great this week if what we have seen in 2022 is any indication of what will take place at Richmond. The Toyota Owners 400 can be seen Sunday at 3:30 p.m. ET on Fox.

I match up the drivers with their best tracks before each season to ensure I have allocations with the top drivers at their best tracks. I had Denny Hamlin, Joey Logano, Christopher Bell and Harrison Burton penciled in as my starters for this race. I threw those picks in the trash Monday morning.

There is a youth movement in the Cup Series. If you select your drivers based on past performance at Richmond you will likely fall behind your competition. There is a group of young drivers who are taking over the Cup Series and we need to move them to the top of the list of drivers for out lineups. Ryan Blaney, Alex Bowman, William Byron, Tyler Reddick, Ross Chastain and Chase Briscoe have consistently run up front and it has not matter what type of track it has been. I plan to use these young drivers in my lineups until the older drivers get their shit together. 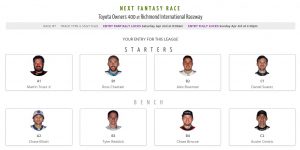 MARTIN TRUEX JR. (9): I really had a tough time with this pick. Do I use Ryan Blaney who has been fast in every race this year but has never run well at Richmond or do I play the driver who has dominated the races at Richmond for three years? I know I said I was going to play the “youth movement” this week, but if I cannot play Truex at Richmond, I probably cannot play him all season. Truex finished 1st, 5th, 2nd, 1st and 1st in his last five races at Richmond. I do not feel great about Joe Gibbs Racing right now but I will take a chance with Truex Sunday.

CHASE ELLIOTT (8): Hendrick Motorsports has won half of the races this season. They won at Auto Club (Kyle Larson), Las Vegas (Alex Bowman) and Atlanta (William Byron). Could this be Elliott’s turn to get to Victory Lane? Elliott has the best average finishing position in the Cup Series through six races Elliott led 50 laps and scored 17 Stage Points at Phoenix last month. The No. 9 car should be fast again Sunday.

ROSS CHASTAIN (9): Did you have Chastain listed as the best driver in NASCAR through the first six races? Don’t lie…. No one saw this coming from the new Trackhouse Racing team, but here we are. Chastain finished third (Las Vegas), second, (Phoenix), second (Atlanta) and he won last week at COTA. You do not fade a driver on a hot streak like this. I would not be surprised if Chastain won again Sunday. He finished seventh at Richmond last year in a car with a lot less speed. I am going to use Chastain until he gives me a reason not to use him.

ALEX BOWMAN (8): I really do not care how Bowman gets to the front at the end of the races. He is really good at putting the No. 48 car upfront when the pay window opens and that is all that matters. Bowman “backed into a win” at Richmond last year. He only led 10 laps and scored 11 Stages Points on his way to Victory Lane. I would not be surprised if Bowman had a similar race Sunday.

TYLER RIDDICK (7): Reddick is probably the best driver yet to win in 2022. The No. 8 car has had speed in every race. He has the fourth-best average running position and the second-best average green flag speed through six races this season. We have already seen some first time winners in 2022. I would not be surprised if Reddick found Victory Lane for the first time Sunday.

CHASE BRISCOE (7): I had no idea I was going to use Briscoe every week in my lineups before the season began but he is too good right now to fade. Briscoe dominated the race at Phoenix and that speed should translate into success at Richmond. Briscoe led 101 laps and scored 12 Stages Points on his way to Victory Lane. Stewart-Haas Racing has a history of running well at Richmond so I will play Briscoe this week. If you want to save an allocation and play a driver you may not use much this season, use his teammate Aric Almirola. The No. 10 car is always good on the short, flat tracks.

DANIEL SUAREZ (8): My Amigo has a fast a car. Suarez finished ninth at Phoenix, fourth at Atlanta and dominated a large portion of the race last week at COTA until his power-steering went out (that is never fun on a road course). Trackhouse Racing has something figured out with the Gen-7 car. Ross Chastain gave the team their first win last week. I would not be surprised if Suarez gave them their second win Sunday.

AUSTIN CINDRIC (6): I am running low on allocations with Cindric but I am not worried about it. I trust Daniel Suarez this week so I plan on using the No. 99 car in my starting lineup no matter how he looks in practice (I expect Suarez will be fast again). That means I will have Cindric on my team for qualifying points only and he has been good at qualifying. Cindric scored bonus points for qualifying in half of the races this season. I expect the No. 2 car will start up front Sunday and give me some free points.