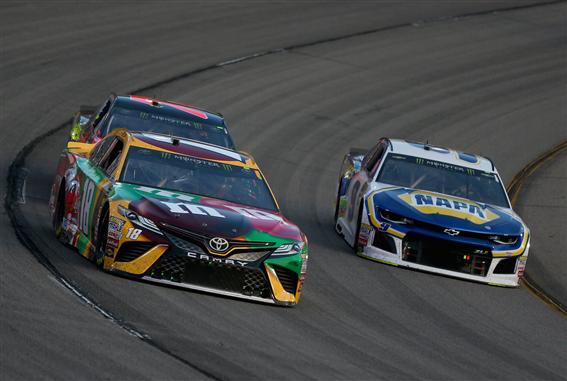 What a disaster the first playoff race was. Whoever’s idea it was to put a NASCAR race in the daytime at Las Vegas is an idiot. The word in the garage is that the track was too hot and slick for the tires GoodYear brought to the track. It is hard to predict blown tires, so all we can do is regroup and try to bounce back at Richmond.

The MENCS will have two practices Friday (11:30am ET and 12:30pm ET NBCSN). Qualifying will be Friday evening at 6 PM ET on NBCSN. Our lineups need to be entered by 8 AM ET Friday.

The MENCS last competed at Richmond in late April. The race was dominated by Martin Truex Jr. and Joey Logano. The No. 78 car won the pole and led a race high 121 laps. Truex was running 2nd when the caution came out with 9 laps to go. His team dropped the jack and Truex came out of the pits in 1th-place, running his night.  Logano took the early lead and won Stage 1 and Stage 2. Logano was able to led 92 laps and finished 4th. Kyle Busch fought a tight racecar all night but the team kept working on it and his pit crew got him out first on the last stop. Busch went on to win his series-high 5th race at Richmond.

Selecting a driver for Group A is going to be tough this week. The best choices in the field come from the list of drivers in Group A. It will be hard to fade Brad Keselowski since he won 3 races in a row. Martin Truex Jr. has led at least 123 laps in 3 of the last 4 races at Richmond, but he has a 11.5 average finishing position. Denny Hamlin always runs well at his home track and Kevin Harvick cannot be counted out at any track, especially when they have a hole to climb out of. Any of these drivers would be good picks. I am going with the two safest picks for Group A this week.

Kyle Busch (2): Busch has a series-high 5 wins at Richmond and he is the defending race winner. He has been the best driver on the short, flat tracks this season. Busch finished 2nd at Phoenix, won at Richmond and finished 2nd at New Hampshire. If you want to count Martinsville as a short, flat track (the shape is a lot different from Richmond), Busch finished 2nd in that race as well. I would be shocked if the No. 18 team did not show up ready to dominate the race Saturday night.

Joey Logano (7): It is tough to fade Team Penske Racing right now. They found some speed at the tire test at Richmond and it has really translated into race speed. I thought about going with Brad Keselowski in this spot but Logano is a safer choice. Logano has not finished outside the top 10 at Richmond since 2012. He finished 1st, 2nd and 4th in his last three races at the track. Logano led 92 laps in the last race at Richmond. He has a lot of momentum after finished 3 of the last 4 races in the top 4.

Kurt Busch (2): Busch is the best choice in Group B Saturday night. I am down to 2 allocations with Busch and this is one of the tracks I have circled for him. Busch qualified 6th, led 98 laps and finished 11th in the April race at Richmond. He was running 6th when he was forced into the wall by Jamie McMurray. Busch should have a good chance to score bonus points for winning the pole since he won the pole for the last race on a short, flat track at New Hampshire.

Chase Elliott (3): Elliott had a great race at Richmond in April. He qualified 2nd and finished 2nd. Elliott also finished in the top 5 at New Hampshire 2 months ago. Elliott needs a good race after crashing at Las Vegas. The No. 9 team is good at the short, flat tracks so I will use Elliott in my lineups this week.

Aric Almirola (6): Do not look at the final results for Almirola in the last race at Richmond. He qualified 25th and quickly made his way into the top 10. He finished 3rd in Stage 1 and 2nd in Stage 2. His average running position was 8.25. His pit crew had a bad stop with 9 laps to go and forced him to finish outside the top 10. Almirola had his best race of the season at New Hampshire (another short, flat track). The No. 10 car qualified 13th and finished 3rd. This team seems to know how to run well on the short, flat tracks.

Jamie McMurray (5): Never underestimate a driver who has nothing to lose. McMurray has run a lot better since it was announced he was not returning to the No. 1 car. He finished 9th at Darlington, 7th at Indianapolis and was running 6th at Las Vegas when he got a flat tire. McMurray has nothing to lose so he will be “driving it like he stole it” this week. I am willing to gamble with McMurray Saturday night.

* Regan Smith (3): The entry list for Richmond has not been released yet, but I expect Smith to be back in the No. 95 car. If he is, we need to use him. The “Super Sub” finished 20th at Indianapolis (with no practice) and 12th at Las Vegas. He has not raced at Richmond since 2016 but I am not worried about it. The reason he is the top fill in driver is because he is quick to adapt to any situation. I am using Smith as long as he is in the No. 95 car. If for some reason he is not in the car, I will most likely use Alex Bowman.

William Byron (3): Byron has really raced well on the short, flat tracks this season. He finished 12th at Phoenix, 12th at Richmond and 14th at New Hampshire. Byron will be my backup plan if Regan Smith does not look very good in practice or if he qualified too far back in the field.