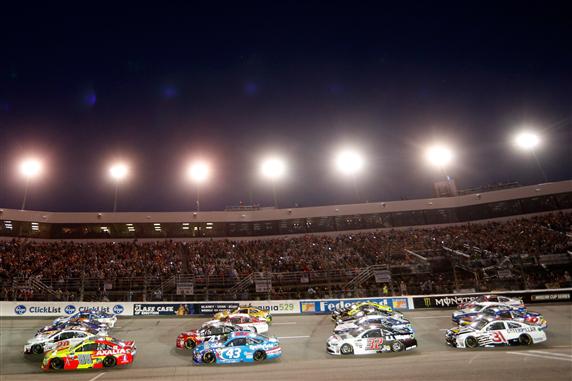 The Monster Energy NASCAR Cup Series will compete at Richmond Raceway this week in the Toyota Owners 400. This is the first night race of the season and one of the shortest races on the schedule. The race can be seen Saturday night at 6:30pm ET on Fox.

NASCAR will have a different schedule this week since this is a night race. There will be two practices Friday and qualifying will be Friday evening (5:30pm ET). There will be no practices on Saturday before the race. Our Driver Group Game picks will need to be selected before 3am ET Friday night, so make sure you have your lineups selected before bedtime Thursday night.

The last race at Richmond was dominated by Martin Truex Jr. He qualified 5th and led 198 laps before his tire went down with 2 laps to go. The story of the race was the Ambulance blocking the entrance to pit road. Kyle Busch was running upfront but missed the pit road entrance because of the ambulance and lost a lot of track position. Kyle Larson ended up leading the last 53 laps to earn the victory in the race.

Richmond is one of my favorite tracks on the schedule. I wish NASCAR had more tracks of this size and shape because the racing is usually really good. Richmond is 0.75-mile track that is wide with an abrasive surface. The track wears out the tires so the drives must search multiple lanes to find the perfect groove for their car. Tony Stewart used to call Richmond, “A dirt track racer’s paradise.” Look for the drivers who are good at moving around the track to be up front Saturday night.

There are plenty of great options this week in Group A. Denny Hamlin is the safest option. He has not finished worse than 6th at Richmond in the last 6 races at the track. Kevin Harvick has finished 4 of the last 5 races at Richmond in the top 5. His win at Phoenix should translate into success this week. Joey Logano finished 1st and 2nd in the two races at the track last year. Martin Truex has led a series-high 391 laps in the last 4 races at the track. Any of these drivers will be great picks for your team. I am going with the two drivers who will have the most momentum after their strong run at Bristol.

Kyle Busch (8) should be in every lineup this week. To say Busch is on a hot streak is an understatement. Busch has finished 1st, 1st, 2nd, 3rd, 2nd and 2nd since the race at Atlanta. That is an average finishing position of 1.8, with 457 laps led. Busch leads the MENCS with 4 wins at Richmond. The No. 18 car is going to be tough to beat Saturday night.

Kyle Larson (10) has been the best driver in the last two night races at Richmond. Since this race has been moved from a day to a night race, I focused more on the drivers in the fall race for my picks this week. That moved Larson to the top of the list. No driver has been better then Larson under the lights. He should have some momentum after he dominated the last race at Richmond.

Group B does not have as many good choices as Group A, but if you watch the races at Richmond you will see there is value in this group. Ryan Blaney has been flat out fast at every track. I am running low with allocations with him so I need to leave him off my team. Chase Elliott is good at every track but he will once again be without his crew chief and this team has been struck by bad luck. I will wait until later in the season to use Elliott. Jamie McMurray and Ryan Newman have great stats at Richmond but I just cannot trust these two drivers. Kasey Kahne is the 2nd-best choice on paper this week. He finished both races at Richmond in the top 6 in 2016, but that was in a Hendrick Motorsports cars. I cannot trust Kahne this week. I am going with the Stewart-Haas Racing drivers this week. This team has been hot and I will continue to use them until they cool off.

Kurt Busch (6) must be on every team this week. He is running as well now as he has in a very long time. Richmond ranks as his 2nd-best track behind Atlanta. Busch is very good at qualifying at Richmond so he should have a good chance to score bonus points for qualifying. He also has an average finishing position of 7.5 in the last 7 races at the track. Stewart-Haas Racing said they want to get the No. 41 and No. 10 cars to Victory Lane to secure their playoff spots. I expect Busch to be in one of their best cars Saturday night.

Clint Bowyer (8) has not been a great pick at Richmond but he hasn’t had any good cars either. When Bowyer drove for Michael Waltrip Racing he was very good at this track. He won the race in 2012 and finishe 2nd and 3rd in two other races. Stewart-Haas Racing is at the top of their game right now and Bowyer has consistently ran in the top 10. I expect the No. 14 car to perform well again this week.

Aric Almirola (10) is in the same boat as Kurt Busch… Stewart-Haas Racing wants to lock up his playoff spot by getting him to Victory Lane. I am sure they will provide Almirola a fast car for the race Saturday night. Last year Almirola qualified 25th and finished 9th at Richmond while driving for Richard Petty Motorsports. His SHR car will qualify much better and have a lot more speed to get Almirola another top-10 finish.

Erik Jones (8) will be my backup plan to the Stewart-Haas Racing drivers. On paper Jones looks like an aweful pick. His average finishing position at Richmond is 22nd. If you watch the races though you will see Jones ran very well in his two races. Jones was running 9th when he crashed in this race last year. He bounced back with a 6th-place finish in the fall. Matt Kenseth dominated the last race at Richmond in the No. 20 car. I would not be surprised if Jones is not driving the same exact car Saturday night.

Group C is still hard to navigate but there are some drivers who are showing some improvement. Michael McDowell and David Ragan are now essentially Roush Fenway Racing drivers. Front Row Motorsports will receive cars and engines and share notes with RFR. This should make both drivers a lot better options the rest of the season. Darrell Wallace Jr. is starting to run up front, now he needs to get better at finishing up front. William Byron is starting to show he can be a top-15 driver. I will save him until after the All-Star Break.

Alex Bowman (5) will be my backup plan this week to Daniel Hemric. Bowman runs very well at Phoenix and that track is similar in size and shape as Richmond. The Hendrick Motorsports cars had a lot of speed at Bristol. I am expecting them to be fast again this week. I hate to use another allocation with Bowman, but I think there will be a lot more choices in this group once we get deeper into the season.