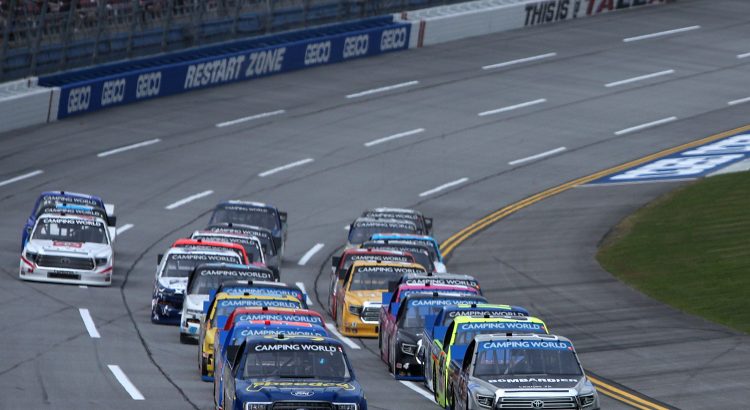 The Cup Series playoffs will continue this week at Talladega Superspeedway. I thought this race was going to be the wildest race in the playoffs, but it is going to be hard to top the craziness the Cup Series had last week at Texas Motor Speedway. Fantasy NASCAR players needed a lot of luck to survive the blow tires last week. You are going to need even more luck to survive the wrecks at Talladega. The 2022 chaos will continue this week in Alabama. The YellaWood 500 can be seen Sunday at 2 p.m. ET on NBC.

Saving allocations with your top drivers is usually the strategy at Talladega. We do not need to worry as much about allocations this year as we did in the past. The 2022 season has shown us that a mid-tier driver can finish up front on the smaller downforce track, just as easily as he can finish up front at a Superspeedway. I will be looking at the five races at the Superspeedways (Daytona, Talladega and the two races at Atlanta) for the picks this week. The drivers who were “lucky” enough to finish up front in these races will be in my lineup Sunday.

We cannot predict which drivers will be in the wrecks Sunday but we can predict which drivers will run up front and score the most Stage Points. My strategy at the Superspeedway races is to chase the Stage Points. Once a driver scores the Stage Points, they cannot be taken away. If you have a driver that finishes up front in Stage 1 and Stage 2, he will have a decent score in the Driver Group Game, even if he wrecks at the end of the race. 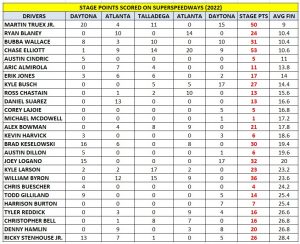 Here are the picks for the YellaWood 500 …

MARTIN TRUEX JR. (5): The popular picks for Group A will be Denny Hamlin, Chase Elliott and Ryan Blaney. I will pivot and use the driver who has been the best on the Superspeedways this year. Truex finished 13th in the Daytona 500, 5th in the spring race at Talladega, 8th at Daytona in August, 8th in the first race at Atlanta and 11th in the second race at Atlanta. His ninth-place average finishing position is the best in the series and his 50 Stage Points are second-most in the series. Truex also qualified second in the last race at Talladega. The No. 19 car has not been to Victory Lane yet this season, but it would not surprise me if Truex finished up front Sunday.

ROSS CHASTAIN (3): Dale Earnhardt Jr. once said that his secret to success on the Superspeedways was to be as aggressive as possible and try to stay up front and keep the wrecks behind him. Is there a more aggressive driver in the Cup Series than Ross Chastain? He won the first race at Talladega this year and he finished second in both races at Atlanta. Chastain has not been great at scoring Stage Points but he finished 3 of the 5 Superspeedway races in the top two. He has been too good on the Superspeedway races to fade this week.

BUBBA WALLACE (5): Talladega is the home track for Wallace and he has a history or finishing up front in these races. Wallace won this race last year. Could he do it again Sunday? Wallace has the second-best average finishing position (10.4) on the Superspeedways this year and he has scored 31 Stage Points in the five races. Wallace has been pretty good at avoiding the wrecks and finishing up front so I will have him on my team this week.

BRAD KESELOWSKI (6): It is no secret that Keselowski is good at Talladega. His 6 wins at the track is the most in the series. Keselowski was really good in the Daytona 500 and then he crashed at Talladega. The No. 6 team is starting to figure out the Gen-7 car. Keselowski shocked everyone by winning the pole and finishing 8th last week. I would not be surprised if Keselowski shocked people again Sunday and went to Victory Lane at one of his best tracks.

WILLIAM BYRON (5): Byron has been the best driver in the playoffs and I doubt a trip to Talladega will slow him down. Byron finished all four playoff races in the top-eight. He also has a win at Daytona and finished 2nd at Talladega last year. Byron qualified 8th, finished 4th in Stage 1, won Stage 2 and he finished 15th at Talladega this spring. Byron was in a slump in that race and he is on a hot streak now. I will play the hot hand and have the No. 24 car in my lineup this weekend.

ERIK JONES (2): Jones was the best driver in Group C at Talladega in April. Jones qualified 16th, finished both Stages in 8th place and finished 6th in the race. Jones won the 2018 race at Daytona so he knows how to get to the front in the draft. His 14th-place average finishing position on the Superspeedways this year is 6th-best in the Cup Series. I will take my chances with the No. 43 car Sunday.

AUSTIN CINDRIC (2): Cindric shocked everyone when he won the Daytona 500. He was also good in August when he finished 3rd at Daytona. So can he run as well at Talladega as he has at Daytona? I think he can. Cindric has the fourth-best average finishing position on the Superspeedways this year. I just wish he would score more Stage Points. I will have Cindric in my lineup this weekend and hope he can finish at Talladega like he has at Daytona.