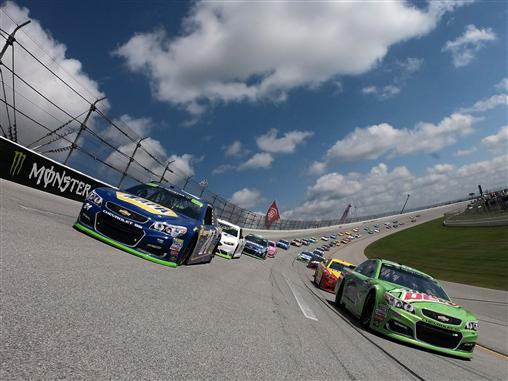 The first race of Round 2 of the MENCS Playoffs is in the books. I thought we were going to have a historic race with Kevin Harvick, Aric Almirola and Chase Elliott all running in the top 5 near the end of the race at Dover. Chaos took over the end of the race and it will most likely happen again this week. The race this week at Talladega is the most unpredictable race on the schedule. It will take more luck than skill to post a high score Sunday. I think I have some drivers who will have luck on their side.

NASCAR likes a reduced weekend race schedule and that is what they have this week. The MENCS will only have one practice this week. The first and final practice will be Saturday at 10am ET on NBC Sports Network. Garage Talk Notes will not be posted this week because practice at the Superspeedways is meaningless and the information will not help your fantasy teams. Qualifying for the MENCS will be Saturday at 3:30pm ET on NBC Sports Network. Our Driver Group Game picks need to be submitted before 8am ET Saturday morning.

The MENCS last competed at Talladega in April. Kevin Harvick won the pole and led the first 12 laps. Brad Keselowski led 21 and won Stage 1 but was taken out in a wreck with 22 laps to go. The Fords took the top 6 spots in Stage 2, led by Paul Menard. It was his only Stage win of the year. Joey Logano led the most laps (70) and took home the checkered-flag. The Fords took 6 of the top 7 spots in the race.

The race Sunday has a great chance of being a complete mess for your Fantasy NASCAR team. This is not the race where you want to start your best drivers. I recommend saving Kevin Harvick, Kyle Busch, Martin Truex Jr., Chase Elliott, Kurt Busch, Ryan Blaney, Clint Bowyer, Alex Bowman and William Byron for more predictable tracks. The only way I would start any of these drivers is if you have 3 or more allocations with them.

Brad Keselowski (7): Keselowski is “The Man” when it comes to playoff racing at Talladega. He has won 3 of the last 4 October races at Tallagdga. Last year he was in a must win situation and got the job done. That is incredibly hard to do at this track. Keselowski has a series-high 5 wins at Talladega and he is my pick to go to Victory Lane Sunday.

Joey Logano (7): If Keselowski is not in Victory Lane this week it will probably be one of his teammates. Team Penske Racing has won 6 of the last 8 races at Talladega, including the last 3. That is total domination by one organization. Logano qualified 9th, led a series-high 70 laps and found his way to Victory Lane at Talladega in April. He is one of the best restrictor-plate drivers in the sport and he should be a favorite to win Sunday.

Ricky Stenhouse Jr. (3): Stenhouse is one of the best picks in the field this week. His 11.4 average finishing position in his 10 career races at Talladega is a series-best. Stenhouse finished 5th in this race last April and won the race in 2017. He only has two wins on his MENCS resume and both of them came on Supersperways. Stenhouse may wreck the entire field in order to get to Victory Lane but I do not care, as long as he does not touch my other drivers.

Aric Almirola (4): Almirola should have his spot in Round 3 of the MENCS Playoffs secured but the late caution at Dover took away his win. Now Almirola must run well at Talladega if he wants to advance. He can get the job done. Almirola has finished 7th, 5th, 4th and 8th in his last four starts at Talladega. 3 of those starts were in Richard Petty Motorsports cars. Almirola is one of the best kept secrets in Fantasy NASCAR on the Superspeedways. He has been knocking on Victory Lane’s door this season and this is the week when the door may be opened.

Ryan Newman (6): Which driver has the 2nd-best average finishing position on the restrictor-plate tracks (Behind Aric Almirola)? It is Newman. Most people think of Austin Dillon as the best Superspeedway driver for Richard Childress Racing. Newman is actually more consistent. He has finished 8th, 9th, 8th, 6th, 11th, 2 and 5th in his last 7 restrictor-plate races. The goal in Fantasy NASCAR when the series competes at the plate tracks is to reduce our risk of having drivers who wreck. Newman has complete 19 races in a row on the Superspeedways without being involved in “The Big”. He is either really lucky or really good. I will take some of his luck and put it on my team.

Chase Elliott (2): I know many of you are probably thinking, “Why is Chase Elliott on his team?” Elliott is the favorite to win the pole Saturday and I can really use the 10 bonus points. Elliott leads the series in average starting position on the Superspeedways (4.8). He has won the pole in 4 of his 10 career races on restrictor-plate tracks. He won the pole for the last plate race at Daytona and qualified 5th at Talladega in April. I feel comfortable enough with the other 3 drivers in Group B that I will have Elliott on my team for qualifying points only this week.

David Ragan (2): Ragan has been very good at Talladega since joining Front Row Motorsports. He has never finished outside the top 10 while driving the No. 38 car. Ragan finished 10th in both races last year and 6th in the April race at Talladega. He also finished 15th and 6th in his last two races at Daytona. Ragan has 2 wins on his MENCS resume. One at Daytona (2011) and one at Talladega (2013). I will role the dice with Ragan as my Group C driver this week.

Alex Bowman (2): If Chase Elliott does not win the pole Saturday evening; it most likely will be his teammate. The No. 88 car has been the best when it comes to qualifying on the Superspeedways and it does not matter if it is Dale Earnhardt Jr. in the car or Bowman. The No. 88 car has qualified 2nd, 11th, 1st, 1st, 1st, 2nd, 2nd, 1st and 2nd in the last 9 restrictor-plate races. I know most of them came with Earnhardt in the car but I trust Bowman to start on the front row this week. Bowman is on my team for qualifying points only this week. I will use Ragan in the race.