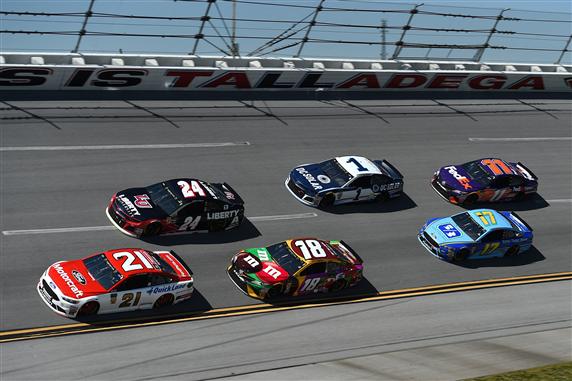 Only six races remain in the 2019 MENCS season and it is about to get real interesting at Talladega Superspeedway. The goal of this race is to survive and advance. That is easier said than done. Manufactures will try to work together to finish up front but in the end the drivers need to be in the right place at the right time if they want to avoid the “Big One.”  The 1000Bulbs.com 500 can be seen Sunday at 2 p.m. ET on NBC.

* I will not be posting Garage Talk Notes this week since practice is almost meaningless at Talladega. Even the less funded cars can run up front at this track. Most teams do not talk about their downforce on the radio so little information is released.

The cars will have the 550 HP engines with the 2” splitter, 8” spoiler and aero ducts this week. It is the same package used earlier this season at Talladega and both races at Daytona. The cars were slower but the racing was about the same as what we have seen in the past at the track.

Finally the Chevy’s figured out that they have the most cars in the field and if they work together they will be tough to beat. Austin Dillon won the pole, Ty Dillon won Stage 1 and Chase Elliott led a race-high 45 laps, won Stage 2 and went to Victory Lane. Chevy took six of the top eight finishing positions. Joey Logano was the only Ford to finish in the top five. I expect the manufacturers will work together again Sunday.

Joey Logano (1): I only have one allocation left with Logano and I am not afraid to use it. He is by far the best driver at this insane track. Logano has finished four races in a row at Talladega in the top five. That is either incredible luck or he has a skill no other driver possess. He also has four trips to Victory Lane on the Superspeedways. The No. 22 team dug themselves a hole last week after they had an axle problem before the race began. That means Logano needs to finish both Stages up front and score as many points as possible Sunday. He is the best pick in the field this week.

Chase Elliott (6): How quickly things can change in NASCAR. The No. 9 team was flying high after their win at the Charlotte Roval. Then their race at Dover was over before it began because of engine failure. Elliott sits 11th in the playoff standings and seven points below the cut line. He needs a lot of points or a win Sunday to advance to the Round of 8. The good news is he can get it done. Elliott won the last race at Talladega and he finished 3rd at the track last year. I have a lot of allocations left with the No. 9 car so I have no problem using one this week.

Aric Almirola (4): Almirola got off to a hot start in 2019 and then he went into a slump ever since the last race at Talladega. If the No. 10 team is going to have anything positive to look at for the off-season, it could be a win in Alabama. Almirola won this race in 2018 and he has two trips to Victory Lane on the Superspeedways on his resume. Staying out of trouble is the name of the game at Talladega and Almirola is one of the best drivers in the field at avoiding wrecks. He has finished 9th, 1st, 7th, 5th, 4th and 8th in his last six races at the track. Almirola is the best choice in Group B this week.

Ricky Stenhouse Jr. (6): Stenhouse is either going to win the race or wreck the entire field trying to win the race. After he was let go from Roush Fenway Racing, Stanhouse said, “Well at least I know I do not need to make any friends at Talladega now.” Ut oh…. It sounds like we will see the crazy Stenhouse again this week. I rather have him on my team then have a car wrecked by the No. 17 Sunday.

Alex Bowman (5): Bowman is a good pick for a couple of reasons. The No. 88 team is very good at qualifying on the Superspeedways so he gives you a good chance to score qualifying points. He will likely run right in front or right behind Chase Elliott and that is not a bad place to be. And Bowman needs as many points as possible to stay in the top eight of the playoff standings. He finished second at Talladega in April and he will have a good chance to finish in the top five Sunday.

Ryan Preece (8): I am taking a chance with one of my Group C drivers this week. Preece has actually been one of the best drivers on the Superspeedways this season. He finished 8th in the Daytona 500 and 3rd at Talladega in April. When I re-watched the race I noticed Preece ran almost every lap at the bottom of the track and just stayed in line and did not make any aggressive moves. His strategy of “playing it safe” worked. I will take a chance that he can make it work again Sunday.

Ty Dillon (4): Dillon had his best race at Daytona in July. He qualified 23rd and finished fourth. He was one of the winners from Chevy deciding to work together. Dillon spent a lot of time working with the Hendrick Motorsports cars in all of the Superspeedway races this season. That is not a bad place to be on the track. This is a good race to use an allocation with Dillon.