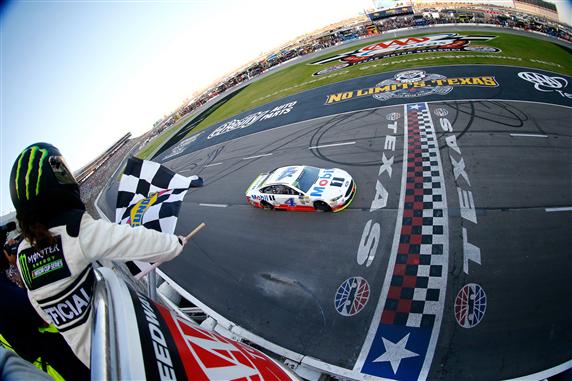 Three races remain in the 2018 MENCS season and things just got interesting. Joey Logano won at Martinsville so his spot in the championship race is secure. Kyle Busch, Martin Truex Jr. and Kevin Harvick are all 25 points above the cut line. This leaves Kurt Busch, Clint Bowyer, Chase Elliott and Aric Almirola almost in a “must win” situation. Can one of these outsiders beat the “Big Three” to Victory Lane Sunday? The race can be seen Sunday at 3pm ET on NBC Sports Network.

The MENCS will be back to a normal schedule this week. There will be one practice Friday (2pm ET on NBCSN) and two practices Saturday (12:30pm on CNBC and 3pm ET on NBCSN). Qualifying will be Friday evening at 7pm ET on NBCSN. Our Driver Group Game lineups must be submitted by 8am ET Friday.

The MENCS last competed at Texas in April. Kurt Busch won the pole. It was his second consecutive pole at Texas Motor Speedway. He lost the lead to his teammate, Kevin Harvick on the first lap of the race. Harvick went on to win Stage 1, led 87 laps and finished second. Martin Truex Jr. ran second for all of Stage 1 but blew a tire on lap 80 and it ended his day. Kyle Busch took the lead to start Stage 2 and it was game over after that. Busch won Stage 2, led 116 laps and went onto Victory Lane for third time in the MENCS.

Teams had a lot of problems with the front right tires blowing up in the April race at Texas. Brad Keselowski, Denny Hamlin, Jimmie Johnson, Kyle Larson and Martin Truex Jr. all had problems in the race. Goodyear thinks they figured out the problems with the tires so it should not be an issue Sunday. I sure hope so!

The AAA Texas 500 should be a race between the Big Three (Kyle Busch, Kevin Harvick and Martin Truex Jr.) These three drivers have won 7 of the 9 races on the 1.5-mile tracks this season and 16 of the last 20 (dating back to the start of the 2017 season). My top 2 picks are Kyle Busch and Kevin Harvick but I am out of allocations with Busch so I will use Martin Truex Jr. as a replacement.

Kevin Harvick (1): Harvick “should” be the driver to beat Sunday. He has 3 wins, a series-high 690 laps led and a series-high 119.8 driver rating on the 1.5-mile tracks this season. The No. 4 team is having a hard time putting together a complete race right now. Harvick had the most dominant car at Dover and Kansas but he finished 6th and 12th in those races. His average finishing position in the last 8 races at Texas is 3.75, so he “should” be a safe pick Sunday. I would love to save my last allocation with Harvick for Phoenix but I want to have him on my team just in case he dominates all of the practices and wins the pole this weekend.

Martin Truex Jr. (3): Some people wrote off the No. 78 team when they announced they are shutting down after the season. That is a mistake. The race at Martinsville showed there is still some fight in this team. The problem is that they chose to fight clean while their competitors were in a “no holds barred” match. It will be a different story if Truex is running second Sunday. I expect him to race more aggressively and do whatever it takes to get to Victory Lane. Joey Logano may have awakened a sleeping bear last week and I want a “do whatever it takes” driver in my lineup this week. Truex has led more laps (363) at Texas in the last 5 races than any other driver in the field. I hope I can use him in my starting lineup Sunday.

I am out of allocations with Kurt Busch and Clint Bowyer. Busch is my No. 1 pick in Group B and I would use him over Aric Almirola. Busch has won the last two poles at Texas and the track ranks as his best intermediate track. If you have any allocations left with Busch, use them Sunday. I like the drivers I selected over Clint Bowyer. He has only been mediocre on the 1.5-mile tracks this season.

Ryan Blaney (1): Blaney is my second-best choice in Group B. He is very good at qualifying on the 1.5-mile tracks so he should have a great chance to score bonus points for qualifying. Blaney has the highest driver ranking out of the Group B drivers on the 1.5-mile tracks this season. He qualified 4th and finished 5th in the April race at Texas. I expect similar results from the No. 12 car Sunday.

Chase Elliott (2): Elliott is 35 points behind the transfer position so he will likely need to win the race Sunday in order to advance to Homestead. The No. 9 car should have the speed to fight for the win this week. Elliott won at Dover and Kansas so their intermediate track cars have been very good. Elliott has competed in five MENCS race at Texas and his average finishing position is 7.4. I have two allocations left with Elliott and I think it is a good idea to use them before he is eliminated from the playoffs.

Eric Jones (3): Jones had one of his best races of the season in the April race at Texas. He qualified 21st and quickly made his way to the front. Jones led 64 laps, scored 14 Stage points and finished 4th. If you take away his flat tire at Las Vegas, Jones has an 8.25 average finishing position on the 1.5-mile tracks this season. I have three allocations left with Jones and three races left in the season. If he looks fast in practice I will use him in the race.

Aric Almirola (2): The Stewart-Haas Racing cars have been very fast at the intermediate tracks in the playoffs. Each of their cars have consistently run in the top 10 and that is the reason why they are still alive in the playoffs. Almirola is 50 points behind the transfer spot so he needs to either win at Texas or Phoenix in order to advance to Homestead. I doubt that will happen, but this team should be fast enough to run both races in the top 10.

Alex Bowman (1): Finding drivers in Group C is becoming more and more difficult as we reach the end of the season. I am out of allocations with William Byron but he has not been very good lately anyways. Bowman is the most consistent driver from this group so he will get a spot on my team. I want to save Bowman for Phoenix but if he qualifies in the top 10 and post top-10 lap speeds in practice, I may use him in my starting lineup Sunday.

Chris Buescher (4): Buescher has been a decent pick at his home track. The Texas native has an 18.75 average finishing position at the track since he joined JTG Daugherty Racing. Buescher has run well on the 1.5-mile tracks in the playoffs this season. He finished 15th at Las Vegas and 16th at Kansas. This is a good week to have Buescher in your lineup.