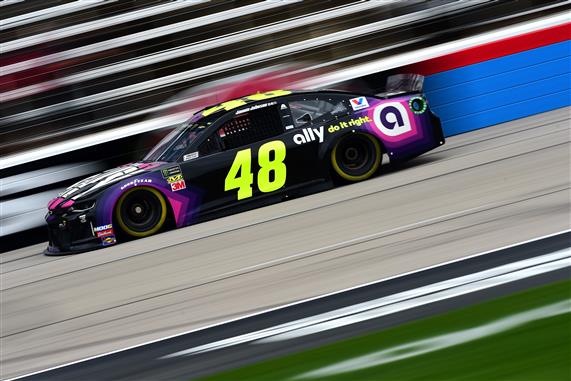 Things are about to get real… There are only three races left in the 2019 season and only three spots left in the championship race at Homestead. There is no holding back now for the teams competing for the trophy and there is no reason for fantasy players to save allocations at this time of the year. The teams will bring their best cars and you should use your best drivers. It should be an exciting race in the Lone Star State. The AAA Texas 500 can be seen Sunday at 3 p.m. ET on NBC Sports Network.

NASCAR will be back to a normal schedule this week. There will be two practices Friday. The first practice is at 3 p.m. (NBCSN) and final practice will be at 5 p.m. (No TV. Taped delayed will show Saturday at 7 p.m. on CNBC… That is just STUPID!) Qualifying will be Saturday at 7 p.m. ET (NBCSN). The website says that our rosters need to be set by 8 a.m. Saturday morning. This would be after the two practices so check the website Friday night for my updated picks.

The cars will be inspected Saturday before qualifying so we do not have to worry about any cars failing inspection and starting from the back this week.

The cars will have the 550 HP engines with the 2” splitter, 8” spoiler and aero ducts this week. It is the same package they used in all of the 1.5-mile track races this season (except Atlanta). I would focus on the results from the intermediate tracks this season and not what happened at Texas in previous years.

Jimmie Johnson won the pole for the last race at Texas. He led 60 laps, finished 2nd in Stage 1 and 10th in Stage 2 before bringing the No. 48 car home in 5th place. Kyle Busch took over the middle of the race. The No. 18 car led a race-high 66 laps, scored 8 Stage points but with 59 laps to go Busch had a tire go down and scraped the wall. Busch finished 10th. In the end it was Denny Hamlin who had the car to beat. Hamlin qualified 6th, led 45 laps, won Stage 2 and was holding the 6-shooters in Victory Lane at Texas. He had to overcome two pit road penalties (tire violation and speeding) to take home the win.

* Two of the Team Penske Racing cars (Brad Keselowski and Ryan Blaney) had engine failure in this race and Joey Logano had problems with his hood staying down..

* I am out of allocations with Kyle Busch

Kevin Harvick (1): Harvick was on Fox Sports’ Race Hub last week and said, “Martinsville is not one of our better tracks. Our goal is to get out of the race this weekend with a top 10 and move onto two of our favorite tracks. We are bringing our best mile-and-half car to Texas. The guys have been working on it since the spring so I expect we will have a better chance to win that race.” Sounds good to me. Harvick leads the series in laps led (430 laps led is 186 more than any other driver) and ranks 3rd in average finishing position (9.6) on the 1.5-mile tracks this season. I have no problem using my last allocation with Harvick Sunday.

Chase Elliott (5): Elliott dug himself a hole with all of his mechanical issues at Martinsville. He sits 44 points below the cut line and is almost in a “must win” situation. The AAA Texas 500 is a race Elliott can win. He has a series-best 3rd-place average finishing position in the two races on 1.5-mile tracks in the playoffs (Las Vegas and Kansas) and he ranks as the 2nd-best driver on the 1.5-mile tracks this season. Hendrick Motorsports dominated qualifying in March at Texas. I expect Elliott to qualify up front, lead a lot of laps, score a lot of Stage points and have a good chance to go to Victory Lane Sunday.

** I originally had Martin Truex Jr. Picked for this race but since he won last week at Martinsville, I am not sure how focused the No. 19 team will be on this race. I expect them to use this race to test setups for the championship race at Homestead.

* I am out of allocations with Ryan Blaney and Clint Bowyer

Denny Hamlin (1): I only have one allocation with Hamlin left but he has to be on my team this week. Hamlin has been one of the best drivers in the playoffs and he won the March race at Texas. Hamlin also won the last race at the 1.5-mile track two weeks ago in Kansas. All of the stats point to Hamlin going back to Victory Lane again Sunday. I would love to save him for Phoenix but his success at Texas and the last intermediate track is too good to pass up.

Jimmie Johnson (1): Johnson has been a beast at Texas. He has 7 wins, 1,112 laps led and a 9.6 average finishing position in his 32 races at the track. Johnson had one of his best races in the Lone Star State in March. He won the pole, scored 9 Stage points, led 60 laps and finished 5th. Johnson is running a lot better now than he was at the beginning of the season. He said he wants to win a race before the season ends. This is his best shot at getting the job done.

William Byron (4): How impressive was Byron at Martinsville? No one expected him to compete for the win last week. Things are different in Texas. The No. 24 car has a good chance to run up front Sunday. Byron qualified 2nd, led 15 laps and finished 6th at Texas in March. He has been the 4th-best driver on the 1.5-mile tracks in the playoffs. Byron finished 7th at Las Vegas and 5th two weeks ago at Kansas. He also led laps in both races. The No. 24 car is no stranger to Victory Lane at Texas. This could be the week when Byron scores his first win in the MENCS.

Erik Jones (2): The last spot in Group B was a choice between Kurt Busch and Erik Jones. I have one allocation left with Busch and 2 left with Jones. Their stats are almost identical on the 1.5-mile tracks this season so I decided to use Jones since I have more allocations left with the No. 20 car. Jones had a good race at Texas in March. He qualified 11th and finished 4th. It was the 3rd consecutive race at the track where Jones finished in the 4th position. I will gladly take another 4th-place finish from Jones Sunday.

* I am out of allocations with Daniel Hemric

Chris Buescher (1): I only have one allocation with Buescher and I have been saving it for this race. Texas is the home track for Buescher and he has a history of running well in the Lone Star State. Buescher likely will not qualify well but once the green flag is waive; Buescher usually makes his way to the front. He has a 24.7 average starting position and a 13.6 average finishing position on the 1.5-mile tracks this season. Buescher should finish in the top 15 again this week.

Ty Dillon (2): I am saving my last allocation with Matt DiBenedetto for Phoenix so Ty Dillon gets the last spot in Group C this week. He had a decent race at Texas in March. He qualified 9th, which was surprising and he finished 21st. His average running position was 19.1 so he spent most of the day in the top 20. The No. 13 team has improved ever since they received more money from sponsors to inspect their cars before they take them to the track. Dillon finished 16th at Las Vegas and 22nd at Kansas in the playoffs. He should finish near the 20th position again Sunday.