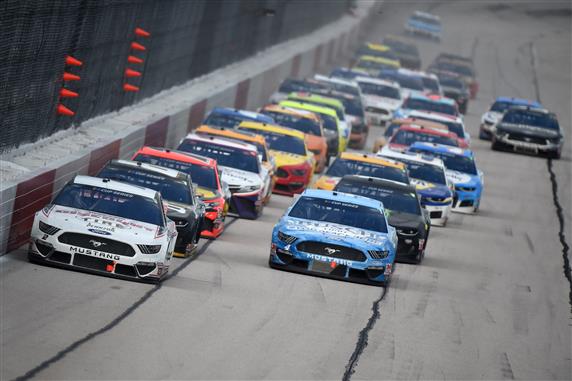 The Cup Series will head to Darlington this week to compete at the Track Too Tough to Tame. Sunday’s race was a good one and I expect the same in Darlington Part 2. This will be a night race and the finishing positions for the top-20 drivers in Sunday’s race were inverted for the race Wednesday night. That should create a lot of passing at Darlington. The Toyota 500 can be seen Wednesday at 6 p.m. ET on Fox Sports 1.

If it were not for bad luck, I would have no luck in the Driver Group Game. I originally had Kevin Harvick but changed the pick to Brad Keselowski after the No. 2 car drew the pole position. That was a mistake. The Group B picks were all solid (Alex Bowman, Kurt Busch, Erik Jones and Jimmie Johnson). The No. 48 car was bad fast but got spun out while leading the race. I originally had Tyler Reddick in Group C but changed it to Cole Custer after Reddick drew the 29th starting spot. That was a bad decision. I am keeping all of the original picks this week and not changing them no matter what happens. Hopefully it will lead to better luck in this race.

Here are my picks for the Toyota 500…

(Start) Kevin Harvick: Kevin Harvick had the best car Sunday and the No. 4 team is bringing it back to the track Wednesday night. Harvick will start the race from the 20th spot but he should be in the top 10 before the end of Stage 1. Harvick will also have the No. 1 pit stall. That should help him get the track position he needs to dominate this race. Harvick has finished every race at Darlington since 2012 in the top 10 and he has finished every race this season in the top 10. Harvick is almost a lock for a top-10 finish Wednesday night.

(Bench) Chase Elliott: It doesn’t matter who is on my bench this week since there is no qualifying for this race. Chase Elliott should be your driver if you want to save your allocations with Kevin Harvick. The Hendrick Motorsports cars have shown a lot of speed all season and they are not going to lose it all in three days. The reason I like him is because his car came to life when the sun was going down. I expect the No. 9 car to be bad fast in a night race at Darlington.

(Start) Alex Bowman: The No. 88 car had a lot of speed Sunday and it will have a lot of speed Wednesday night too. There are five tracks that are high tire wear tracks. They include Darlington, Auto Club, Chicagoland, Homestead and Atlanta. Alex Bowman ranks No. 1 in Driver Ranking, Average Finishing Position and Green Flag Speed at these tracks. That includes wins at Chicago and Auto Club and a second-place finish at Darlington. We need to use Bowman at all of the tracks that quickly wear out tires.

(Start) Erik Jones: Jones should still be an excellent pick, even though he will not have his crew chief Chris Gayle. He has never finished worse than eighth at Darlington in a Cup or Xfinity Series race. The Track Too Tough to Tame is by far his best. The reason why Jones is so good at this track is because of his ability to save his tires on the long runs. Jones finished in the top-10 at both tracks with high tire wear this season (Auto Club and Darlington). I expect another top-10 finish from the No. 20 car Wednesday night.

(Bench) Kurt Busch: Kurt Busch is the safest pick in Group B. He finished 3rd after starting 22nd in Sunday’s race. He should be able to win the race from his 18th starting spot. Busch is on a hot streak right now. He finished 3rd at Auto Club, 6th at Phoenix and 3rd at Darlington. He has also finished every race at Darlington in the top seven since 2016. The only reason I am not using him in my starting lineup is because he is good at every track and my two starters are not.

(Bench) Jimmie Johnson: I really thought I stuck gold with Jimmie Johnson Sunday. He was leading the race and about to win Stage 1 when Chris Buescher got lose and caused Johnson to spin out. Johnson was fast at Darlington last year too. He starts deep in the field but he has a car fast enough to get to the front. If you feel like taking a gamble Wednesday night, take a chance with the seven-time champion.

(Start) Tyler Reddick: How impressive was Tyler Reddick Sunday? He started 29th and finished 7th. Now Reddick gets to start from the 14th position. I really like Reddick for a few reasons. He is one of the best at running the top of the track and that allows him to pass a lot of cars. Also, Reddick posted his fastest laps after lap 240 Sunday. That means his car came to life when the track cooled down. His should be very fast in a night race this week.

(Bench) Matt Kenseth: If you want to use the safest pick Wednesday night, you should have Matt Kenseth as your driver. Most people were worried about how well Kenseth would run after 18 months out of the car (I was one of the people worried). All Kenseth did was go out and post a top-10 finish. I used Tyler Reddick over Kenseth in my starting lineup because I expect Kenseth to be good at all tracks. I am not sure Reddick will have top-10 potential at all tracks. 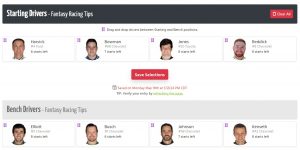