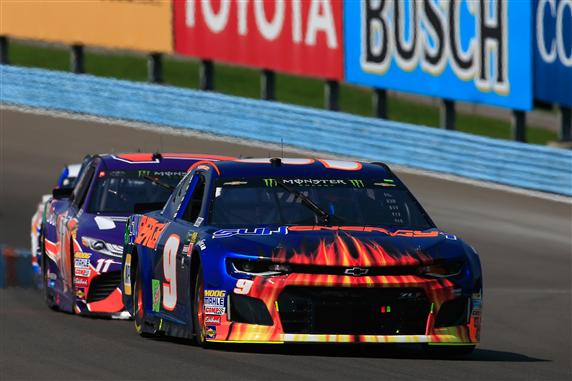 There are only five races left in the MENCS regular season. The action on the track always heats up at the series heads into the month of August. Drivers who are on the playoff bubble will likely continue to play it safe and score as many Stage points and finishing points as possible. Drivers on the outside, looking in at the playoffs will likely is fuel strategy to try and steal a win. Drivers who are already locked into the playoffs have one thing on their mind… Win the race! It should be fun to see how it all plays out. The Go Bowling at the Glen can be seen Sunday at 3 p.m. ET on NBC Sports Network.

Denny Hamlin won the pole at Watkins Glen last year but he was only able to lead 2 laps. Kyle Busch and Martin Truex Jr. are always good on the road courses and it was no different last year at Watkins Glen. The No. 18 car led 31 laps and finished 3rd. Truex only led 4 laps but he scored 15 Stage points and finished 2nd. In the end it was Chase Elliott who used the voice of his father (Bill Elliott) as his spotter to get to Victory Lane. It was his first win in the Cup Series.

Race Rewind at Watkins Glen: Go Bowling at the Glen (2018)

Martin Truex Jr. (4): Truex has been the best road course driver in the MENCS and it is not even close. In the last five road course races, Truex finished 1st, 14th, 2nd, 1st and 1st. The only finish outside the top 2 was at the Charlotte Roval last year when he was running 2nd and spun out by Jimmie Johnson on the last lap. Truex is also good at scoring Stage points. He finished 1st, 2nd, 2nd and 5th in the last two races at Watkins Glen. I expect another top 3 finish from the No. 19 car Sunday.

Chase Elliott (8): Elliott said after the race at Watkins Glen last year, “I spent a lot of time with Jeff Gordon and my father in the simulator trying to improve my road course skills. They showed me what I was doing wrong and their advice worked.” Wow, did it ever work. Elliott qualified 3rd, led a race-high 52 laps, won Stage 2 and went to Victory Lane for the first time in the Cup Series. This is a good race to use another allocation with the No. 9 car.

Kurt Busch (4): Busch is one of the safest picks in the field this week. I would love to use one of the drivers whose allocations are not as valuable as Busch’s starts, but he is a good insurance policy to have available for the race Sunday. Busch has been a top-10 machine at Watkins Glen. He has finished every race since 2012 at the Glen in the top 11. He has a 7.1 average finishing position at the track in the last 6 races. I will roster Busch and hope I do not need to use him in the race.

Erik Jones (3): Jones is not the first driver that comes to mind when people think of road course racers, but he has had some success. Jones has two races at Watkins Glen on his resume and his average finishing position is 7.5. Not too bad. Jones started deep in the field (32nd) at Sonoma earlier this year and he was able to finish 8th. Jones needs points to stay in the playoff race, so I expect the No. 20 team to use pit strategy to score a lot of Stage points and finish in the top 10 Sunday.

Daniel Suarez (7): Everyone knows that Martin Truex Jr. has been the best driver over the last two seasons at Watkins Glen but do you know who is second-best? It is Suarez. He finished 3rd at Watkins Glen in 2017 and 4th last year. Suarez grew up racing on the road courses and his skills have translated into success in the Cup Series. Suarez is another driver who needs points so I expect the No. 41 team to use pit strategy to score a lot of Stage points and finish up front this week.

William Byron (8): I need to save allocations so I will try to get a start from the No. 24 car Sunday. Byron qualified 16th and finished 8th in his first start at Watkins Glen. I was told that Byron spent a lot of time in the simulator with Jeff Gordon over the last month, preparing for this race. Gordon helped Chase Elliott get to Victory Lane last year. Could he have the same success with Byron Sunday? I will take a chance with the young driver because he is a quick learner and he is surrounded by people who have had a lot of success at Watkins Glen.

Michael McDowell (6): McDowell spent a lot of his racing career driving the NASCAR Rolex Grand-Am Sports Cars on the road courses. That experience has led to success in the Cup Series on the road courses. McDowell has a 16.8 average finishing position in the seven road course races. He has not finished outside the top 20 at Watkins Glen since 2014. There are not many tracks on the schedule where McDowell is a good value so we need to use him at the tracks where he has some success. This is one of those races.

Matt DiBenedetto (6): DiBenedetto has not had a lot of success on the road courses but he has not been in very good cars. He has one race on a road course in a Joe Gibbs Racing powered car and he finished 4th. DiBenedetto is in my lineup based on what he was able to do at Sonoma in June. He qualified 19th, drove through the field and finished 4th. It was quite impressive. If DiBenedetto can run that well in California, he should be able to run up front in New York. His crew chief, Mike Wheeler, is one of the best at setting up a car for this track.