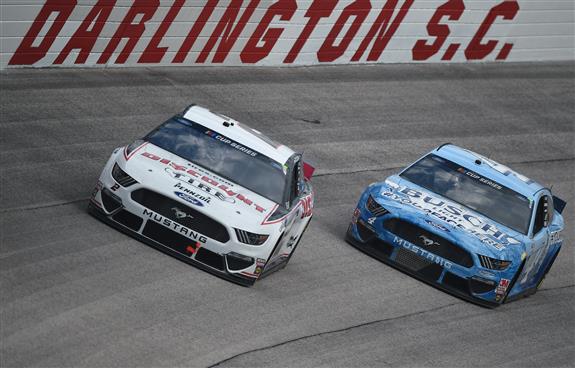 The Cup Series will return to Darlington Wednesday night. The race starts at 6 p.m. ET on FS1. The start time will be almost the same time as when the race ended Sunday. A night race should change the race a bit, but I expect many of the cars who ran up front Sunday to be up front again Wednesday.

* There is an 80% chance of rain Wednesday. If the race is canceled because of weather, NASCAR said the makeup date will be Thursday night.

The race Wednesday is scheduled for 228 laps (500 kilometers). That is 65 less laps that what we had Sunday. It also means less time for drivers to get to the front from the back and there will be a lot of drivers coming from the back. NASCAR inverted the drivers who finished in positions 1-20 in Sunday’s race. That means Kevin Harvick who won the race will start 20th and Ryan Preece who finished 20th will start from the pole. This should make this race interesting.

Each week I use different stats in my model to create the best rankings possible to give you an edge on the completion. This week the stats entered into the model were from the race Sunday and the two races using the 550 HP aero-package this year (Auto Club and Las Vegas).

Here are the early week driver rankings for Darlington Part 2…

Since there is no practice or qualifying, this will be my final rankings for the race Tuesday.