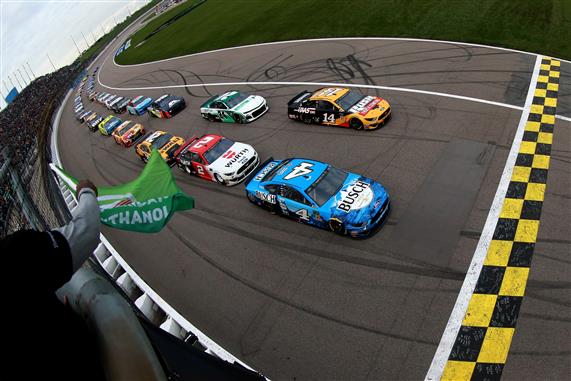 NBC Sports has been featuring the “My Roots, My Tracks” promotion this season. This week the MENCS travels to my home track, Kansas Speedway. This track is always windy and the key to making fast laps is to get your car to travel over the potholes… I mean bumps… in the track. This is the final chance for the 12 drivers competing for the championship to advance into the Round of 8. It should get exciting this week. The Hollywood Casino 400 can be seen Sunday at 2:30 p.m. ET on NBC.

The cars will have the 550 HP engines with the 2” splitter, 8” spoiler and aero ducts this week. It is the same package used at all of the 1.5-mile tracks this season. The track that is most similar to Kansas Speedway is Las Vegas Motor Speedway. We can use the South Point 400 Results to help predict the race Sunday since that was a playoff race and teams showed what they had for the championship that week.

My early week pick for the pole is Kevin Harvick. The No. 4 car won the pole for the last race at Kansas and Harvick won the pole at Las Vegas. This is a very good track for the No. 4 team so I expect them to want to make a statement to the field and start the race from the pole position.

Here are the early week driver rankings for Kansas…