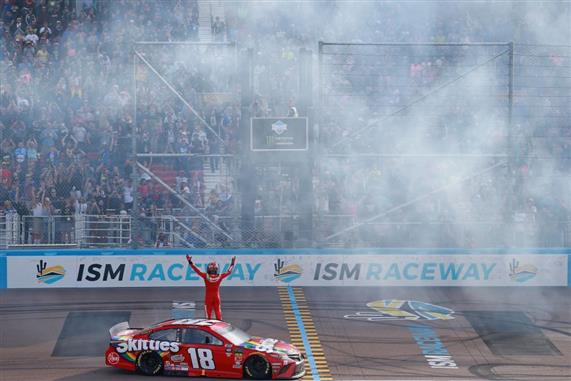 This is it… The final chance for the playoff drivers to secure their spot in the championship race at Homestead is already here. Martin Truex Jr. and Kevin Harvick already have their tickets. Who will be the two drivers to join them? The newly reconfigured track at ISM created some exciting racing in the spring. I expect it to be even better this week. The Bluegreen Vacations 500 can be seen Sunday at 2:30 p.m. ET on NBC.

* I will provide Garage Talk Notes this week but the article will only consist of stats to help your prepare for the race. I will not be available Friday night to monitor the radios and get info from the Garage.

The cars will have the 750 HP engines with the 2” splitter, 8” spoiler and no aero ducts this week. It is the same package they used in all of the short, flat tracks this season. The drivers who ran well at Phoenix in the spring and the races at New Hampshire and Richmond should be up front Sunday.

My early week pick for the pole is Kyle Busch. The No. 18 car started 4th in the spring race at Phoenix and it has quailed in the top 4 in all of the races on the short, flat tracks this season. Busch won the pole for the first race on the reconfigured track at Phoenix last November. He is almost a lock to start on the front row Sunday.