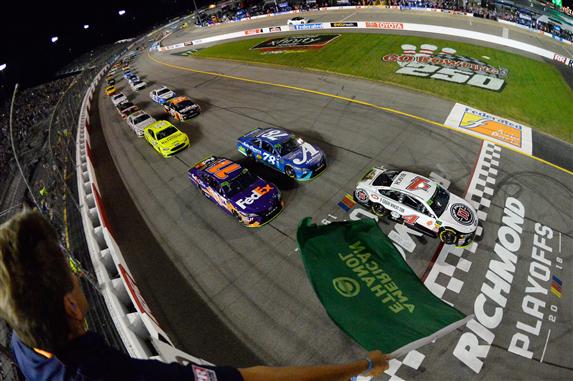 Playoff racing in the MENCS is always exciting. The only way to make it better is to have a short track race under the lights on a Saturday night. That is what we get this week as the series travels back to Richmond Raceway. The first race at the track in was dominated by Joe Gibbs Racing. Will they do the same this week? The Federated Auto Parts 400 can be seen Saturday night at 7:30 p.m. ET on NBC Sports Network.

* NASCAR will inspect the cars Saturday afternoon. Any drivers who fails once will have their qualifying time disallowed and will start from the back. They will be scored from the back in Fantasy NASCAR.

The cars will have the 750 HP engines with the 2” splitter, 8” spoiler and no aero ducts. This is the same package they have used in the past except with a larger spoiler on the rear of the car. The drivers who ran well at Richmond in the past should be fast Saturday night.

My early week pick for the pole is Kevin Harvick. The No. 4 car has been the best at taking the pole on the short, flat tracks this season. Harvick won the pole at Phoenix and then he can back the next month and won the pole at Richmond. He has won the pole for the last two races at Richmond and I think he can make it three in a row Friday evening.

Here are the early week driver rankings for Richmond…

* I will post my final driver rankings Saturday morning.