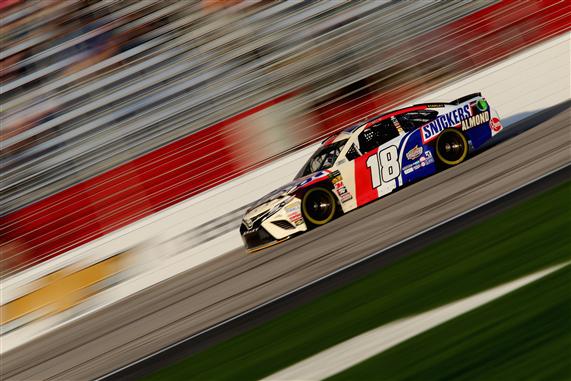 It was another great start for my Fantasy Live picks. I was able to score 202 points and start the season ranked 255th overall. This has been my best game the last four seasons and if I want to continue to dominate this game I need to keep the momentum going at Atlanta. I am confident I can do that.

Picking the best drivers I can on the 1.5-mile tracks and save allocations at the other tracks will be my strategy this season. So do not expect many “sleepers” in my lineup Sunday. We are off to a hot start so I am keeping the pedal to the medal to separate us even more from our competition.

Kevin Harvick is no doubt the class of the field this week. He has led at least 100 laps in every race at Atlanta since he joined Stewart-Haas Racing. When the garage is all talking about running the “Harvick line”, you know you are the driver to beat.

Kyle Larson used to stink at this track but last year he finally learned how to save his tires. While Harvick is the best at running the low line, Larson is the best at the top. He finished 2nd at Atlanta last year and the team really liked their car in practice.

Kurt Busch and Clint Bowyer learned a lot from Harvick. The Stewart-Haas Racing sat down this week and discussed the preferred line at Atlanta. Busch and Bowyer must have learned something because they were in the top 6 on almost all of the speed charts.

Garage Driver: My strategy this week will be the same as last week. I am selecting a driver who starts deep in the field who should make it to the front. Martin Truex Jr. starts 35th and he has a fast car. He is too risky to start since he starts in the back, but if Truex quickly runs through the field, I will take him out of the garage and put him in my lineup.

Here are my picks for the Atlanta…