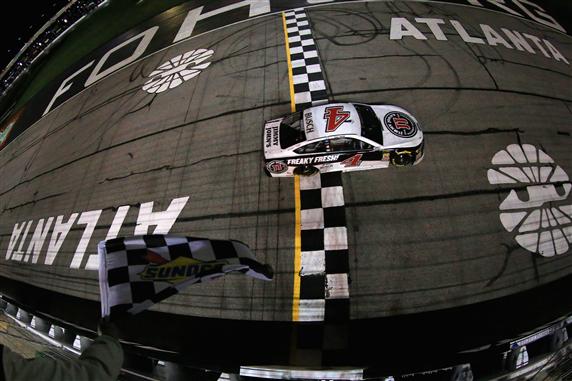 The MENCS will race at Atlanta Motor Speedway this week in the Folds of Honor QuickTrip 500. My Fantasy Live picks scored 127 points and are ranked in the top 81.2%. Not too bad for a Superspeedway race. It is now time to work our way inside the top 90%. The race at Atlanta looks to be as unpredictable as the race at Daytona. It may take a week or two to figure out how this new aero package is going to affect the racing so the best strategy is to play it safe right now.

Kevin Harvick (10): We only get 10 allocations with Harvick and I am using one of them this week. He has dominated every race at Atlanta since 2013 and I see no reason why the race Sunday should be any different. Since joining Stewart-Haas Racing in 2014, Harvick has led an average of 183-laps per race and has a 7.4 average finishing position at Atlanta. The No. 4 car should score a lot of Stage points and finish inside the top 5 Sunday.

Martin Truex Jr. (10): Truex has never won at Atlanta but he has consistently finished in the top 10. I was worried about how the move across the country would affect this team but they look like they still have a lot of speed. Truex was 6th fastest in Friday’s practice and he had the 3rd fastest long run speed in final practice. Truex will have the speed and pit crew to score a lot of Stage points and finish in the top 10 this week.

Kyle Larson (10): Larson is not the first driver who comes to mind when people think about racing at Atlanta but he should be at the top of your list. Larson is very good at searching the track to find speed. He finished 2nd at Atlanta in 2017 and 7th last year. Larson has also scored Stage points in all of the Stages over the last two seasons. I expect him to score more Stage points and finish near the top 5 Sunday.

Clint Bowyer (9): Bowyer looks like he has one of the fastest cars. He was fastest in Friday’s practice and backed it up with the fastest speed in final practice. Bowyer qualified 3rd so he should race up front and score a lot of Stage points. Bowyer finished 3rd in this race last year and he looks fast enough to finish in the top 10 again Sunday.

Aric Almirola (10): Almirola finished all of the races on the 1.5-mile tracks in the playoffs last year in the top 10 and he picked up right where he left off. Almirola was 2nd fastest in Friday’s practice and posted the 10th long run speed in final practice. He won the pole and should be a lock to lead laps and score Stage points. This is one of the best races to use an allocation with Almirola.

My Garage Driver will  be Kurt Busch (10). Atlanta is one of the best tracks for Busch. I was worried that the switch to Chip Ganassi Racing would slow him down. That is not the case. Busch was 6th fastest in practice and had the 12th fastest 10-lap average speed. Busch has not finished outside the top 8 at Atlanta since 2014 so he should be a safe pick. I expect Busch to score Stage points and finish up front Sunday.