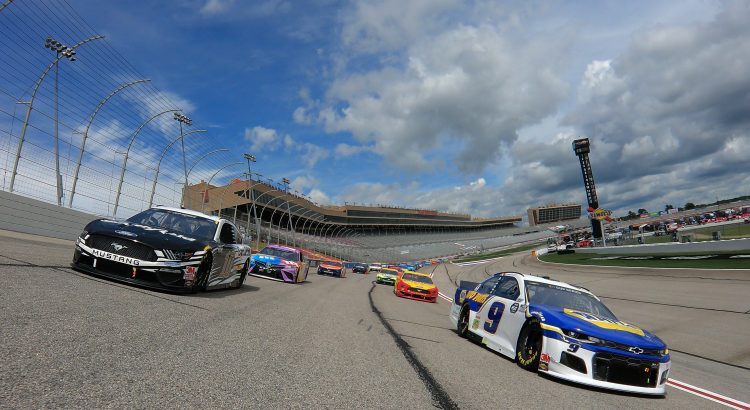 The NASCAR Cup Series will compete at Atlanta Motor Speedway this week. If you ever wanted to be a crew chief, this is the race for you. All you would need to do is sit on top of the pit box and tell your driver to pit for four tires and fuel. You will not see anyone taking two tires or staying out this week. Atlanta wears out tires faster than any track on the schedule and it is fun to watch the drivers search the track for grip, while trying to manage their tire wear. The Folds of Honor Quick Trip 500 can be seen Sunday at 3 p.m. ET on Fox.

The Fantasy Live picks are performing pretty well this season, but that is nothing new. This is by far my best game because everyone else plays it wrong. They get too hung up on allocations when you can make it through the entire regular season by only using 13 drivers (5 drivers per race for 26 races). That means you do not need to dip below the top 13 drivers. It is the top 11 if you save some allocations at the road courses, the dirt track race and the Superspeedways. So you can make it through the season by ONLY using Kevin Harvick, Martin Truex Jr., Denny Hamlin, Chase Elliott, Kyle Larson, Brad Keselowski, Joey Logano, Ryan Blaney, Kyle Busch, Kurt Busch and Alex Bowman. You really do not need anyone else. If you simply stick to these drivers in the non-Superspeedway and the non-Road Course races, you should score well.

Before I get into the picks for Atlanta, I want to post some stats to help you determine which drivers will be the best for your teams. We have the two races using the 550 HP aero package on the 1.5-mile tracks this year (Homestead and Las Vegas) to use data from and the race last year at Atlanta. Here are the driver’s finishing positions in each race and how many Stage points they scored (sorted by average finishing position from all three races combined) 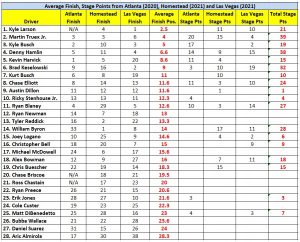 * I am hedging my picks and using Kevin Harvick to win the race, Chevy as my winning manufacturer and Joe Gibbs Racing as my winning team. This will give me bonus points if Martin Truex Jr., Denny Hamlin, Kyle Busch, Christopher Bell, Kevin Harvick, Chase Elliott, Kyle Larson, Alex Bowman, William Byron or Kurt Busch wins the race. The only drivers who could screw this up for me are the Team Penske drivers, but it should lock me into some bonus points at the end of the race.

Kevin Harvick (8): Kevin Harvick is the safest pick in the field this week. When the other drivers call the fastest way around the track as “Harvicking”, you know he is doing something right. He has a 2nd-place average finishing position at Atlanta in the current aero package. He has also led at least 115 laps in 6 of the last 7 races at Atlanta and Harvick has won 4 of the last 8 Stages. This is the best race to use an allocation with the No. 4 car.

Martin Truex Jr. (8): Martin Truex Jr. had the best car at Atlanta last year and he will have some momentum after his win at Phoenix. Last year Truex won both Stages, led 65 laps and finished 3rd in the race. His average finishing position in the current aero package at Atlanta is 3rd. Truex will return to the Xfinity Series Saturday and the extra seat time should help him figure out how the tires wear throughout the race. Truex is my pick to win Sunday.

Kyle Larson (8): Kyle Larson is very good at searching the track for grip and saving his tires over the long runs. He did not compete in this race last year because he was suspended. Larson led a race-high 142 laps, won Stage 1, finished 2nd in Stage 2 but had a bad pit-stop and finished 12th in 2019. That was in a Chip Ganassi Racing Chevy. Larson should be able to smoke the field again this week in his Hendrick Motorsports Chevy.

Kurt Busch (10): So how good is Kurt Busch at Atlanta? The No. 1 team failed pre-race inspection three times last year so Busch had to serve a pass-through penalty at the start of the race. Busch went two laps down and rallied back to lead a lap and finish 6th in the race. He may have won if he did not have to give the field a two-lap head start. Busch has finished 6th, 3rd and 8th at Atlanta in the current aero package. He has also led laps in each race and averaged 8 Stage points per race. This is the best track for Busch so I will use an allocation with the No. 1 car Sunday.

Garage Driver Denny Hamlin (7): Denny Hamlin will once again be in my Garage Sunday. Hamlin starts on the pole and he will have the No. 1 pit stall Sunday. That will be important in a race that is 500 miles and will have at least 12 pit stops for four-tires. I would like to save my allocation with Hamlin, but I will have four fresh Goodyear’s on the No. 11 car in my Garage, just in case I need him in the race Sunday.