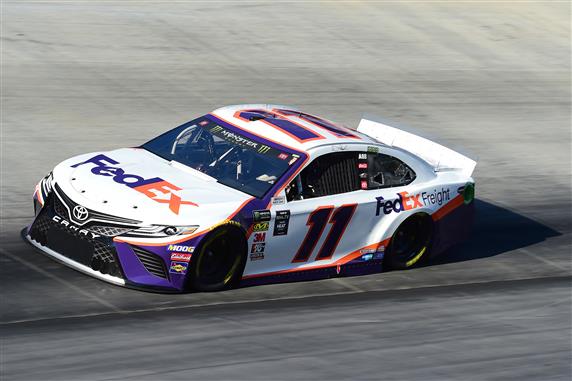 It’s Bristol Baby! If you think it would be cool to mix a demolition derby with a Superspeedway, then the Bristol Night Race is for you. There are many drivers who have scores to settle and others who will do anything possible to secure a place in the playoffs… Even if that means sending another driver into the fence. If there is not a fight after the checkered-flag this week, they did not do it right. This is “Must See TV on NBC.  The Bristol Night Race can be seen Saturday night at 7:30 p.m. ET on NBC Sports Network.

There are 3 races left in the regular season of the Fantasy Live game. There is no reason to save allocations now. If a driver qualifies up front and has a lot of speed in practice, we need to use him even if it is our last allocation.

Denny Hamlin (1): Is there any driver in the sport running as well as Hamlin right now? He finished 2nd, 3rd, 1st, 2nd and 5th since the 4th of July weekend. Now he starts on the pole Saturday night. This is my last allocation with Hamlin and I am going to use it. There is no guarantee he will be this fast in the last two races so I better use him while he starts up front and had a fast car in practice.

Kyle Larson (4): Larson loves this track. No driver in the sport has led as many laps at Bristol as Larson over the last 5 races (489 laps led). Larson spent a lot of time in practice working on the high-line, so his lap times appeared slower than they actually were. Larson starts 2nd and as soon as the top groove comes in, Larson will take over the race.

Kurt Busch (2): Busch hated his car is practice. One of my former collegues from Fox Sports asked crew chief Matt McCall what is wrong with their car. He said the car is fine. It was setup for night time racing. I looked at Busch practice speeds (April Garage Talk Notes) and Busch was 24th fastest in practice but finished 2nd in the race. Busch has 6 wins and Bristol and he finished 1st and 2nd in the last two races at the track. I will use another allocation with Busch Saturday night.

Chase Elliott (2): I have two allocations left with Elliott and I have to use one this week. His work track is Indianapolis so there are really on two races left to use the No. 9 car. Elliott has a fast car. He posted the 4th fastest lap speed in final practice with the 4th best 10-lap average speed and the 3rd fastest 20-lap average speed. Elliott should be able to keep the No. 9 car up front, score a lot of Stage points and finish in the top 10.

Joey Logano (2): Logano has been very good at Bristol. He has finished 3rd in the April race and 4th in the night race last year. He also won Stage in both races. The word in the garage is that Logano has one of the best long-run cars in the race. Logano posted the 5th best 10-lap average speed and the fastest 20-lap average speed. If the cautions are low Saturday night, Logano should dominate this race.

My Garage Driver this week will be Kyle Busch (2). I have two allocations left with Busch with 3 races left on the schedule. I am not ending the season with allocations with Busch in my pocket. I know he starts 31st but that should make Rowdy extra motivated to whip the field Saturday night. I will start Busch in the garage and if he quickly makes it through the field I will put him in the race. If he has problems, I will save him for next week.